Downstream process development continues to evolve to support next-generation antibody therapeutics. Our new hydrophobic anion exchange mixed-mode resin, Nuvia aPrime 4A, has been developed to overcome existing challenges in antibody purification. Described here are two case studies on the purification of an acidic and a basic antibody with Nuvia aPrime 4A through bind-elute and flow-through modes of purification, respectively. The results demonstrate the ability of Nuvia aPrime 4A resin to improve process productivity and economy.

Fig. 3. Effect of buffer pH and NaCl on the binding of mAb X by Nuvia aPrime 4A (A), Capto adhere (B), and Capto adhere ImpRes (C).

Fig. 5. Chromatograms from flow-through purification at pH 6.5 on the respective 1 ml columns.

The global antibody therapeutics market is estimated to expand to about US$200 billion between 2023 and 2026 (Coherent Market Insights 2019, Zion Market Research 2018). This massive growth is fueled by cutting-edge research into various therapeutic aspects of antibodies in drug development. With increasing upstream cell culture titers, additional burdens are placed on making downstream antibody purification and recovery cost- and time-effective. This, in turn, results in an ever-increasing demand for innovative and advanced chromatography resins.

Antibody purification on ion exchange supports has a rich history, going back to the 1950s (see, for example, Speer et al. 1959) when it was demonstrated that IgG can bind to and be eluted from an anion exchange matrix. IgG can also be purified by anion exchange in flow-through mode (Johnson and Libby 1980). Similar purification of antibodies in both bind-elute and flow-through modes have been demonstrated using hydrophobic interaction chromatography (Hofstee 1975).

Given the ability of these ligands to purify antibodies in either mode, the combination of these two modalities has provided similar flexibility for antibody purification. For example, rivanol, a hydrophobic anion exchange mixed-mode small molecule, has long been known to bind to almost all serum proteins except for antibodies (Horejší and Smetana 1956). Another example is Bio-Rad’s DEAE Affi-Gel Blue Gel, which contains anion exchange and hydrophobic ligands and has been used for antibody purification in both modes (Bio-Rad LIT154). However, some mixed-mode chromatographic processes and associated resins still exhibit multiple issues, including poor recovery of target proteins, poor binding capacity, poor pressure-flow properties, low productivity, and poor selectivity.

To overcome these challenges, Bio-Rad has introduced Nuvia aPrime 4A, a new hydrophobic strong anion exchange mixed-mode resin that can be used with great effectiveness to purify antibodies in both bind-elute and flow-through modes. The ligand density and hydrophobicity of Nuvia aPrime 4A have been optimized to facilitate the selective and reversible binding of target molecules for simultaneous high purity and recovery/yield. With Nuvia aPrime 4A, a broad range of impurities can be removed in a single chromatography step.

Chromatographic separations and analyses were performed on an NGC 10 Chromatography System (Bio-Rad), which provides simultaneous monitoring of absorbance, conductivity, and pH.

For purification condition screening, a simple design of experiment (DOE) protocol with a fractional factorial design and two center points was used. Mini Bio-Spin Columns, each containing 0.1 ml of Nuvia aPrime 4A Resin, were pre-equilibrated with the binding buffer to be tested. The mAb feedstock was exchanged into its respective binding buffer. To each pre-equilibrated spin column, 1 ml of 3 mg/ml mAb was loaded and mixed with resin at room temperature for 3–7 min with agitation. Unbound materials were removed at the end of the incubation by spinning at 1,600 x g for 30 sec. The absorbance (280 nm) reading of each collected flowthrough was used to quantify target recovery. A standard least-squares regression using JMP Software (SAS) was employed to obtain critical parameters for mAb purification.

Monoclonal antibody mAb S (pI ~6.9) was purified from a CHO cell culture harvest by Protein A affinity chromatography using UNOsphere SUPrA Resin (Bio-Rad). The resulting eluate contained about 25% mAb S aggregates. After purification condition screening and prior to loading onto the columns, the mAb S solution was adjusted to the desired pH with 1 M Tris HCl and filtered through a 0.22 µm membrane. The total mAb S concentration in this solution was 2.8 mg/ml. A solution containing ~10 mg of mAb S in 20 mM NaPO4, pH 7.8 was injected onto the 1 ml columns pre-equilibrated with the same buffer and eluted sequentially by buffers at pH 6.0 (50 mM MES, pH 6.0) and pH 4.0 (40 mM sodium acetate, pH 4.0). mAb S recovered in the eluates was quantified at 280 nm using an extinction coefficient of 1.4. A flow rate of 300 cm/hr was maintained throughout the experiment. Antibody recovery was calculated using the following formula:

Initial purification condition screening on spin columns showed good binding capacity of mAb S on Nuvia aPrime 4A (Figure 1A). In addition, ≥80% monomer content was predicted, with a modest concentration of NaCl at mild pH conditions (pH 6.0) (Figure 1B). The total protein recovery was seen to be independent of the NaCl concentration. The ≥85% predicted total protein recovery at the harsh pH of ~4.0 represents the column stripping condition, wherein the dimers and high molecular weight impurities are eluted along with the target monomeric mAb S (Figure 1C). 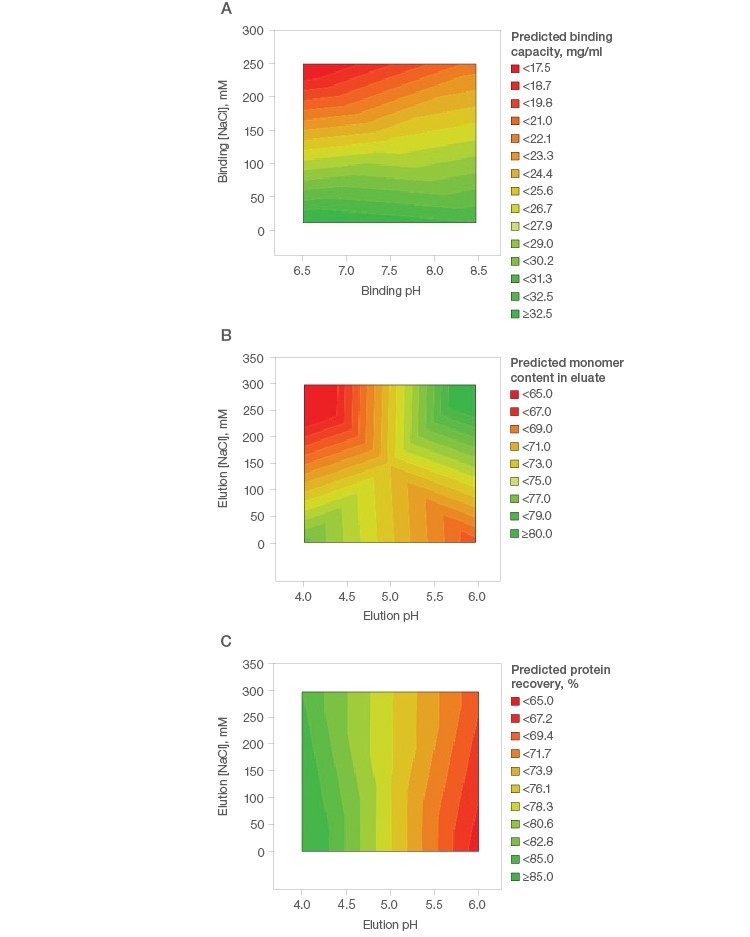 Therefore, comparative purification of mAb S was performed on the three resins by bind-elute mode using 1 ml columns. At the binding buffer pH of 7.8, all of the hydrophobic anion exchangers were expected to interact with mAb S through both electrostatic and hydrophobic interactions. mAb S monomers were eluted from Nuvia aPrime 4A at ~pH 6 with overall ~90% recovery of monomers. The high molecular weight product–related impurities were retained until the resin was stripped with a pH 4 buffer (Figure 2A). Thus, a clear separation of mAb S oligomers from the monomeric fraction was observed.

In contrast, bound mAb S was not eluted by 50 mM MES, pH 6 from the Capto adhere and Capto adhere ImpRes Columns (Figures 2B and 2C). When a more stringent condition was applied, mAb S monomers and aggregates were recovered by 40 mM sodium acetate, pH 4.0. As a result, clearance of high molecular weight species was not achieved on the Capto adhere Resins. In addition, such harsh pH conditions caused the formation and co-elution of dimers and aggregates with monomers (Brummitt et al. 2011), as evidenced by the results of the three purifications (Table 1). This leads to low monomer purity and recovery, ultimately compromising productivity. 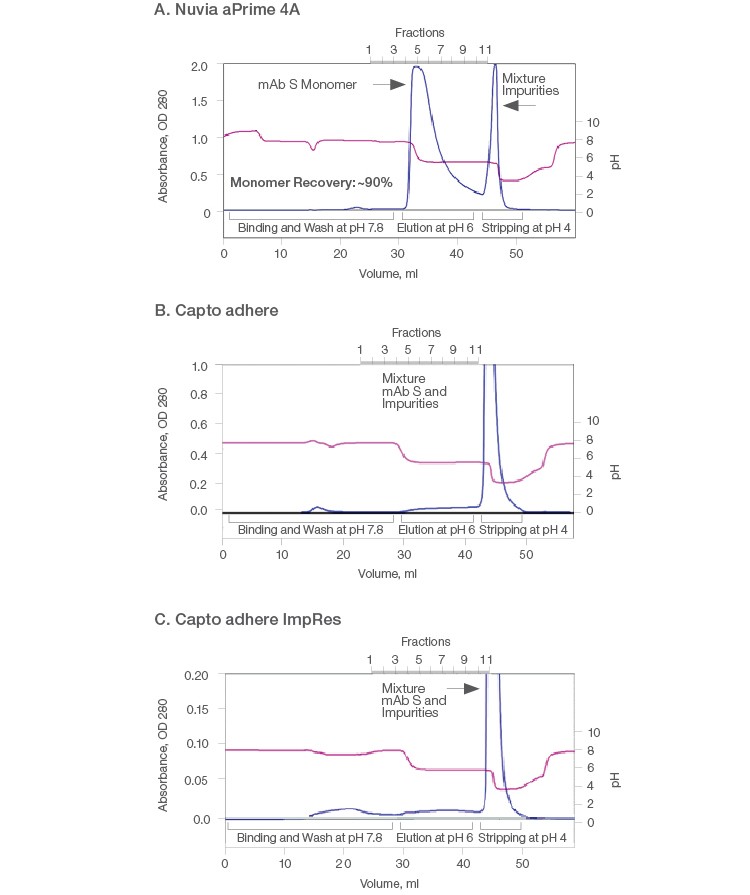 A simple design of experiment with fractional factorial screening and two center points (Table 2) was used to determine optimal conditions for monomer recovery and purity of this basic antibody. The binding capacity of mAb X was found to be low (<30 mg/ml) under all tested conditions on Nuvia aPrime 4A (Figure 3A) and Capto adhere (Figure 3B) and marginally better on Capto adhere ImpRes (Figure 3C). This suggests that flow-through purification would be more appropriate for this mAb. 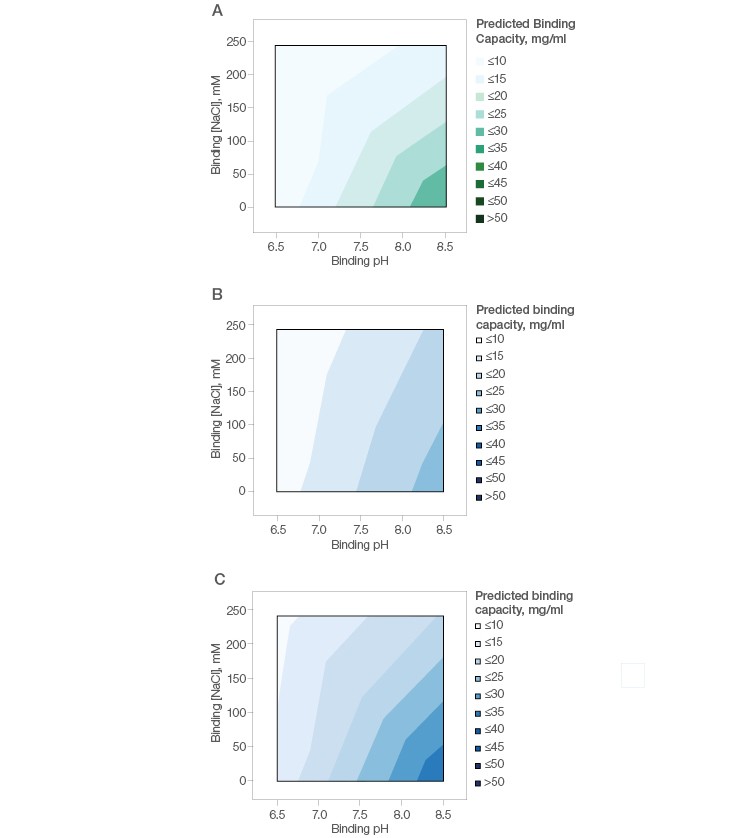 Fig. 3. Effect of buffer pH and NaCl on the binding of mAb X by Nuvia aPrime 4A (A), Capto adhere (B), and Capto adhere ImpRes (C).

Accordingly, the flowthrough from the three resins was analyzed. Nuvia aPrime 4A offered excellent clearance of impurities (aggregates) (Figure 4A) and the best recovery of monomers (Figure 4B) under flow-through conditions. 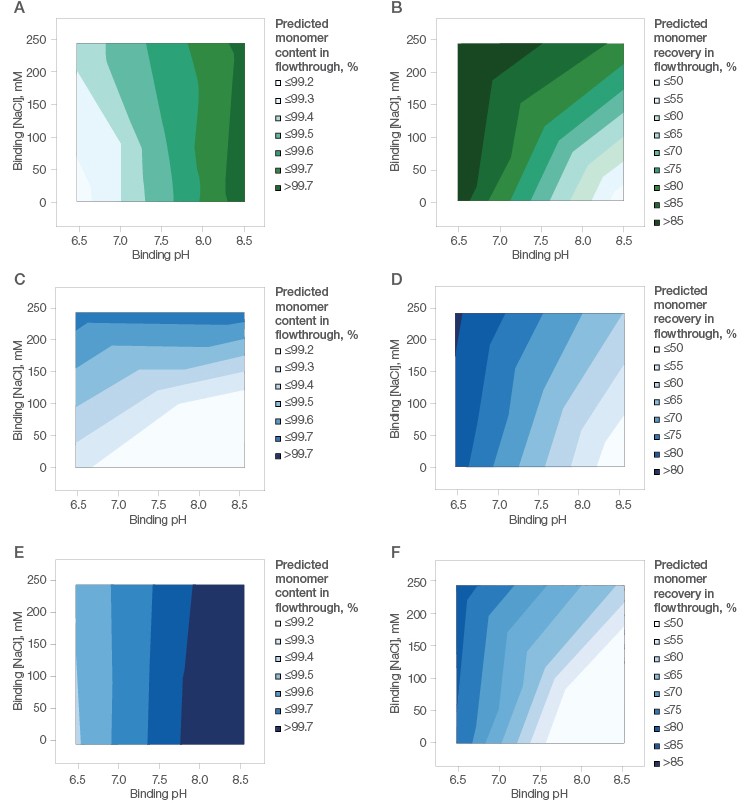 Validation of the DOE results was performed on 1 ml packed columns with a mAb X loading level of 24–26 mg/ml. Purification on Nuvia aPrime 4A (Figure 5A) was compared with the purification on the two other resins at pH 6.5. Tailing of the flow-through peaks was seen on both Capto adhere Columns (Figures 5B and 5C). Additional UV-absorbing material was also visible when the loaded columns were further washed with equilibration buffer, possibly due to nonspecific interactions between the mAb and Capto adhere and/or less efficient mass transfer.

Overall, Nuvia aPrime 4A showed higher mAb X recovery (~94%) than both Capto adhere Resins (~78%) and was effective in removing process-related impurities such as HCP and dsDNA (Table 3).

The results from the 1 ml column purifications are in agreement with the DOE prediction (Table 4). The highest monomer purity and recovery is achieved at pH 6.5 using Nuvia aPrime 4A. 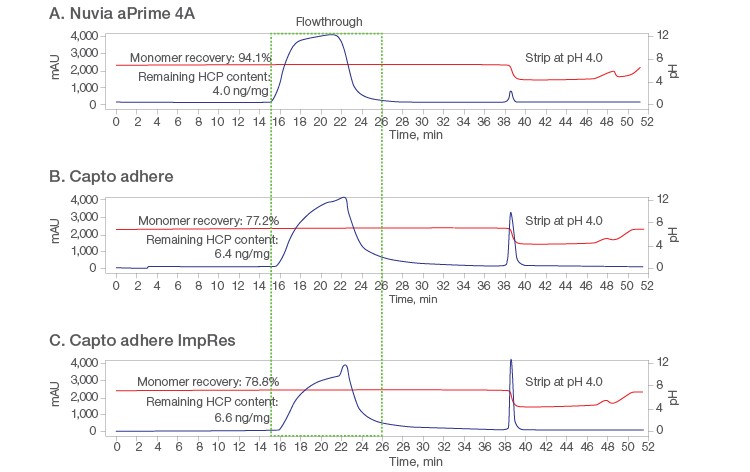 The acidic mAb S purification case study shows the selective and reversible binding of target molecules to Nuvia aPrime 4A for maximal purity and recovery, made possible by its optimized ligand density and hydrophobicity. Nuvia aPrime outperforms the other two resins of this class. The mAb X purification case study highlights ease of method development on Nuvia aPrime 4A. In addition, this resin is salt tolerant, thereby minimizing the need for feedstream conditioning (dilution) before loading onto the column or transferring to the next column in the purification workflow (Figure 1A). Finally, Nuvia aPrime 4A can offer a wide design space (pH and salt) to accommodate the conditions required for difficult-to-purify proteins, including diverse new constructs in development that lack affinity handles.

Hofstee BH (1975). Fractionation of protein mixtures through differential adsorption on a gradient of substituted agaroses of increasing hydrophobicity. Prep Biochem 5, 7–19.

Nuvia aPrime 4A Resin is covered by U.S. Patent Number 9,669,402 and foreign counterparts.