Past studies have shown that CHT Ceramic Hydroxyapatite Media can be used for virus purification. We purified influenza and dengue viruses on the newest member of the CHT family, CHT XT Media. We recovered over 75% of each virus in a single step of purification. In addition, >90% reduction of contaminating proteins and >60% removal of dsDNA were seen in both samples. This positions CHT XT as an additional media for simple, fast, and reproducible viral purification and overcomes the shortcomings of conventional purification methods.

>99% Clearance of Contaminants in Influenza Purification

>91% Clearance of Contaminants in Dengue Purification

Virus preparations have been used as vaccines for over two hundred years, and more recently for gene therapy platforms. For gene delivery, conventional viral purification methods such as density gradient ultracentrifugation and precipitation can be difficult to scale and may not meet the purity standards required for a therapeutic. Consequently, chromatography has emerged as an advanced tool to meet large-scale therapeutic virus purification requirements. Viruses bind to chromatographic resins by electrostatic interactions.

CHT XT is the newest addition to the CHT family of media. It has been designed for superior physical robustness to ensure it can be used repeatedly over a large number of cycles. It maintains the unique separation properties of CHT for aggregate removal and monoclonal antibody purification. In order to test its virus purification capabilities, we performed single-step purifications of influenza and dengue viruses using CHT XT Media.

The viruses used in this study are shown in Table 1.

Influenza virus: Strain A/California/07/2009 was cultured on MDCK cells in minimal essential medium (MEM; Gibco) containing 10% fetal bovine serum (FBS) and L-glutamine in 225 cm2 flasks. When the cells were almost confluent, influenza virus was inoculated onto the cell monolayer at a 1:3,000 dilution in 75 ml of D-MEM/F-12 with trypsin, penicillin, and streptomycin (flu culture medium). The supernatant was harvested on days 3, 4, and 11 and clarified through 0.45 µm filters.

Dengue virus: Type 2 strain ThNH7/93 was cultured on C6/36 cells. Cells were grown in 225 cm2 flasks that were precoated with poly-L-lysine at 100 µg/ml in phosphate buffered saline (PBS). Cells were cultured in Minimum Essential Medium Eagle (modified) (modified EMEM, MP Biomedicals) containing 10% FBS at 28°C for 1 week. After the cells reached confluence, dengue virus type 2 was inoculated at a 1:1,000 dilution onto the cell monolayer in 75 ml of modified EMEM containing 0.5% FBS and MEM Vitamin Solution (Invitrogen Corporation) and cultured at 28°C. The medium was changed at day 3 and culture fluid (about 75 ml) was collected at day 7. The culture fluid was filtered through a 0.45 µm filter to remove cells and large cell debris.

CHT XT Media was packed into 4.6 x 35 mm columns (0.58 ml bed volume) and viral purification was performed at a flow rate of 360 cm/hr as shown in Table 2 for influenza and Table 3 for dengue. All experiments were carried out in triplicate and representative data are shown.

The concentrations of dsDNA in fractions were determined using the Quant-iT PicoGreen dsDNA Assay Kit (Invitrogen Corporation) according to the manufacturer’s instructions.

A confluent monolayer of MDCK cells in 96-well microplates was used for this test. MDCK cells (2 x 104 cells/well) were cultured in flu culture medium for 1 day prior to the testing. Each virus fraction underwent tenfold serial dilution with flu culture medium. Diluted viral fractions (50 µl) were added to each well (n = 3) and cultured for one week. Cytopathic effects were studied under a microscope. Titers were calculated using the Reed-Muench method.

Viral purity was assessed by electrophoresis on a 12.5% SDS-PAGE gel and by immunoblotting. The protocols used for these analyses were as described previously (Kurosawa et al. 2012). Cell culture fluid was concentrated tenfold and all other samples were concentrated 30-fold by ultrafiltration with a 10 kD MWCO filter before use. Bio-Rad’s Gel Doc EZ Imaging System was used to quantitate band density. For immunoblotting, primary antibody anti-HA mAb (Abnova) was used at a 1:200 dilution with the influenza virus samples and mouse anti-D2 serum (made in house by HOYA Technosurgical Corporation for these experiments) was used at a 1:500 dilution with the dengue virus samples. Secondary antibody anti-mouse IgG (Fc)-POD (American Qualex) was used at a 1:1,000 dilution. The bands were visualized with EzWestBlue (ATTO Corporation).

The chromatographic results from the influenza virus purification are shown in Figure 1. Influenza virus elutes at approximately 250 mM phosphate, with good separation from the bulk of UV-absorbing material and partial resolution from dsDNA. Hemagglutination activity (red bars on the chromatograms) measures the titer of virus that can bind to molecules present on the surface of red blood cells and cause agglutination. As seen in Figures 1A and 1B, HA activity is predominantly seen between retention volumes of 26 and 31 ml. The total viral activity recovered from these fractions was calculated to be about 75% of the starting activity. This activity was well separated from the bulk of the DNA and A280-absorbing impurities. The samples showing bulk viral activity were pooled for further analytical assays. 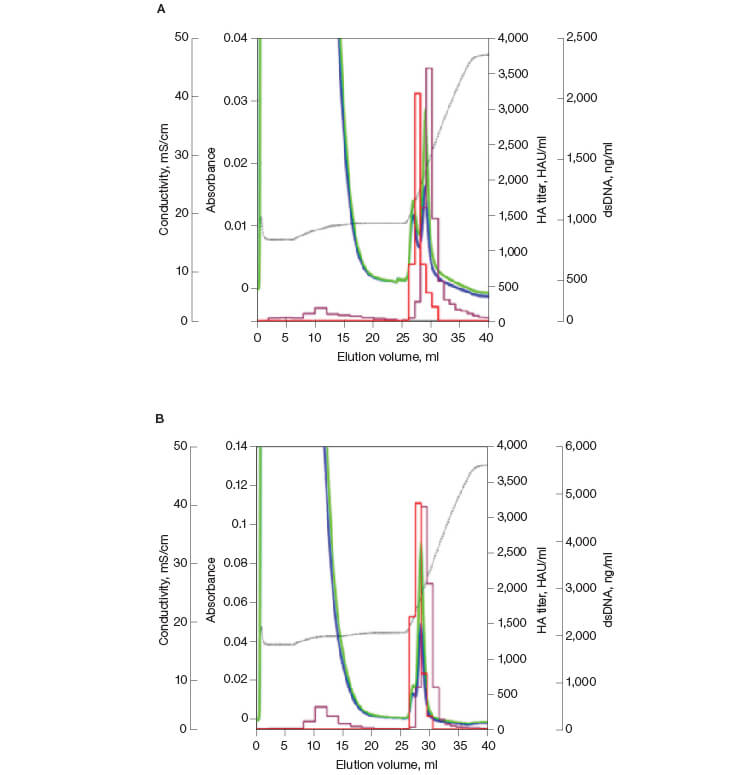 In order to determine if the purified influenza virus maintained its infectivity, a TCID50 test was performed (Figure 2) to assay for cytopathic effects (CPE). This test determines the quantity of active, infectious particles. A mean recovery of ~68% infectivity was calculated for the replicates. As seen in Figures 2A and 2B, the bulk of the infectivity is seen at retention volumes that also showed the highest HA activity. This confirmed that fractions 26 to 32 contained active, purified virus. 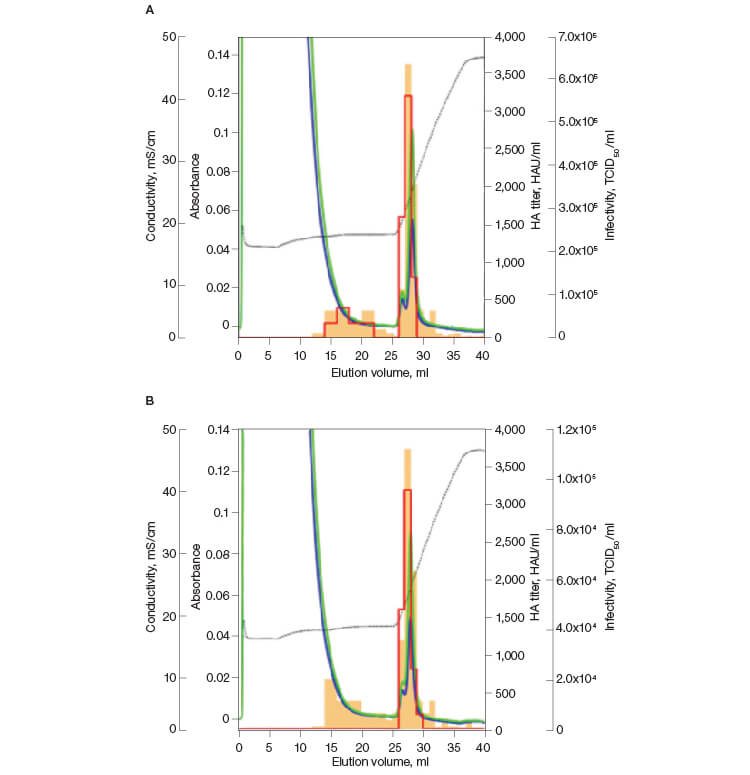 Table 4. Results from the analytical assays on the pooled influenza samples from the HA assay.

SDS-PAGE analysis of the active pooled fractions from Figure 1 confirmed the significant purification of species migrating at the expected molecular weight for the two forms of the HA protein (Figure 3A). Immunoblotting of the same samples confirmed that the concentrated bands are HA (Figure 3B). 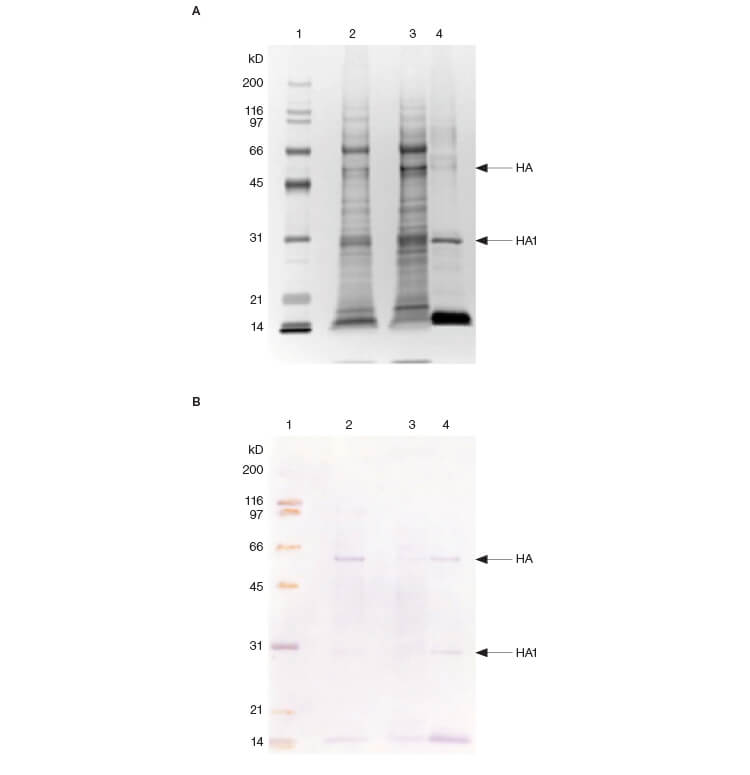 The chromatographic results from the dengue virus purification are shown in Figure 4. Dengue virus elutes at approximately 400 mM phosphate, with good separation from the bulk of UV-absorbing material and dsDNA. HA activity was predominantly seen between retention volumes of 28 to 38 ml; fractions 30–35 were pooled for further analysis. The total viral activity recovered from these fractions was calculated to be about 87%. Viral activity was not detected in the flow-through fractions in any of the replicates. 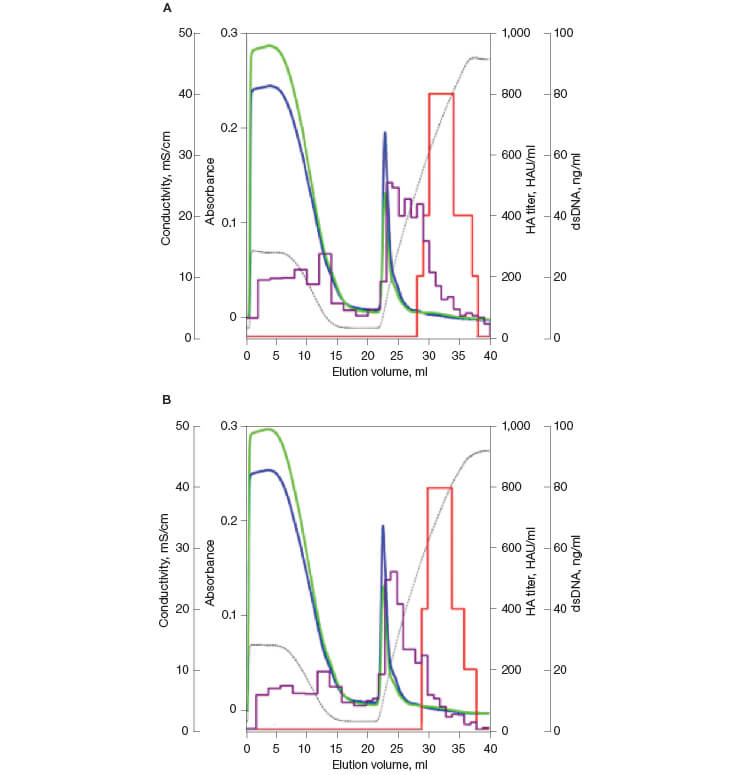 Table 5. Results from the analytical assays on the pooled dengue samples from the HA assay.

SDS-PAGE analysis of the pooled active retention fractions from Figure 4 showed that the pool contains proteins that migrate at the expected position for dengue E and C proteins as shown on the immunoblot (Figure 5). Note that a contaminant can be seen migrating immediately above the E protein on the SDS-PAGE gel. 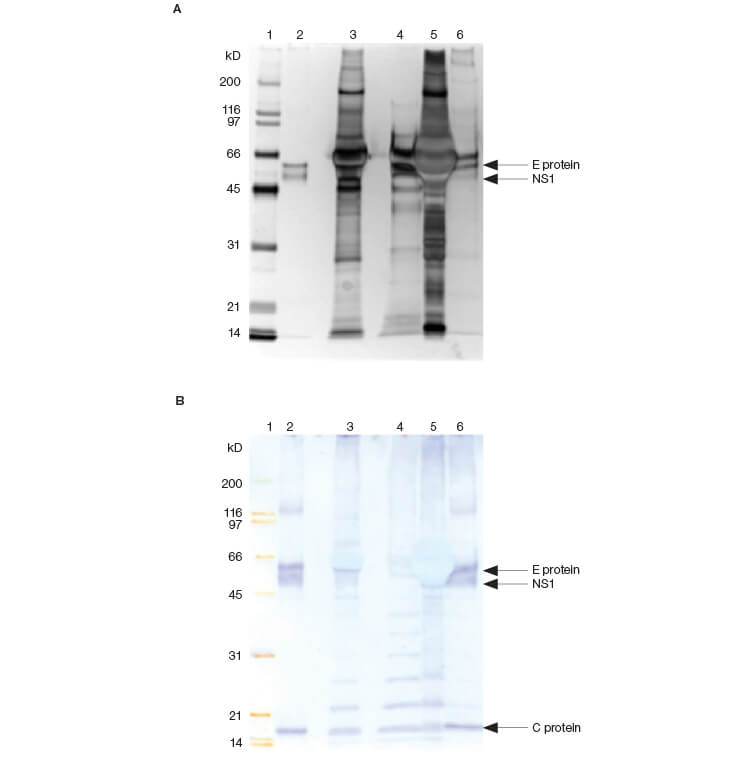 Chromatography media are continuously evolving to meet the increasing demands of the bioprocessing industry. We developed the new CHT XT Media to meet the demand for a robust media with excellent life time and single-step purification functionality for healthy process economics. With both high purity and high yield for both influenza and dengue viruses, we show that CHT XT can be used for single-step impurity clearance. This positions CHT XT as a media for simple, fast, scalable, and reproducible viral purification.

See how you can improve aggregate removal and process economy with CHT XT.

See how you can improve cost efficiency with CHT XT.

Request a sample of CHT XT.

Bio-Rad and CHT are trademarks of Bio-Rad Laboratories, Inc. in certain jurisdictions. All trademarks used herein are the property of their respective owner.