Preamplification is a powerful technique that enables qPCR analysis for many targets from limited samples. However, it is frequently treated as a necessary evil as many fear that it may introduce bias into their experiments, leading to the generation of inaccurate results. Preamplification is also sometimes misunderstood as being a magic bullet to boost qPCR sensitivity. This article addresses these issues as well as others, so that you can be confident when using preamplification in your qPCR experiments.

1. What is preamplification and how is it useful for qPCR?

PCR-based preamplification is a method used to increase the concentration of a specific panel of targets in a sample prior to qPCR analysis, reducing the required sample input for multi-target qPCR experiments. Preamplification is essentially a highly multiplexed PCR reaction performed for a limited number of cycles using the same primer sets that will be used in the downstream qPCR reaction. By using a reagent designed for preamplification with a limited number of PCR cycles, optimal amplification efficiency can be maintained for each target, which is essential to preventing the introduction of bias into the qPCR analysis. With just 10–14 cycles of preamplification, the concentration of each target is boosted by 1000-fold or more, providing enough preamplified sample to analyze all of the targets by qPCR without compromising the sensitivity of the qPCR analysis. As a rule of thumb, preamplification is useful any time the amount of sample available limits the number of targets that can effectively be analyzed.

2. Will preamplification introduce bias to my experiment? 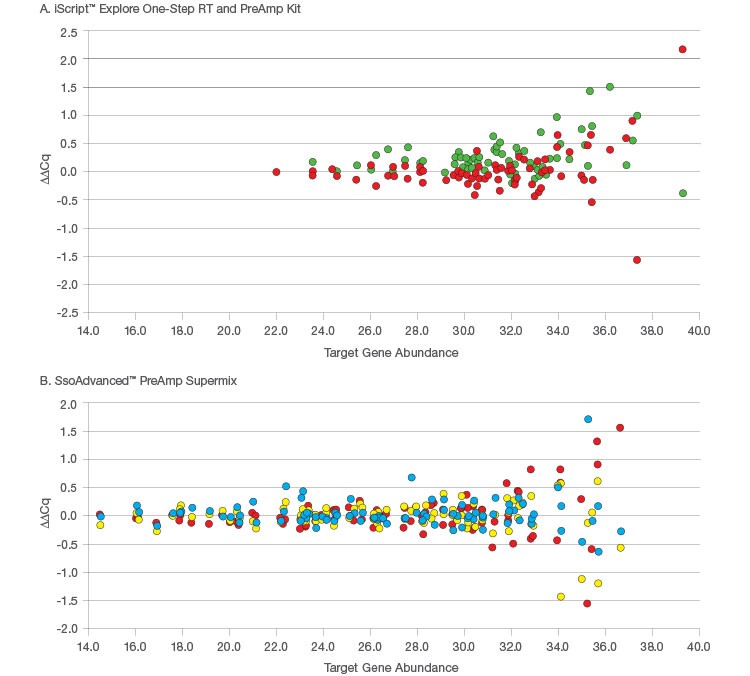 Fig. 1. Analysis of fold-change bias introduced by preamplification. The ΔΔCq results show the difference between the measured and expected fold-differences between samples measured by RT-qPCR with and without preamplification. A, data for iScript Explore One-Step RT and PreAmp Kit where 81 targets from the PrimePCR Pan-Cancer lncRNA qPCR Array were analyzed in 10 ng and 40 ng of Universal Reference RNA (Agilent) with preamplification (

Okino et al. also investigated dynamic range bias to determine whether target concentration has a systematic effect on the accuracy of qPCR results generated using preamplification. They found that when they performed preamplification for 20 cycles, some highly abundant targets produced qPCR results with extremely low Cq values, around 5. Because it is difficult to properly baseline the fluorescence data for targets that amplify this early, these qPCR data cannot be reliably used. When preamplification is performed for a more moderate 10–14 cycles, it is far less likely that dynamic range bias will be encountered.

3. How do I calculate the level of target enrichment achieved through the use of preamplification?

The expected level of target enrichment achieved via preamplification can easily be calculated based on the volume of sample input, the number of PCR cycles used for preamplification, and the final volume of the diluted preamplified sample. For example, when analyzing 10 µl of RNA using the iScript Explore Kit with the recommended protocol, you can expect to achieve an approximate 328-fold enrichment of each preamplified target (assuming 100% PCR efficiency):

4. Does the use of preamplification improve qPCR sensitivity? 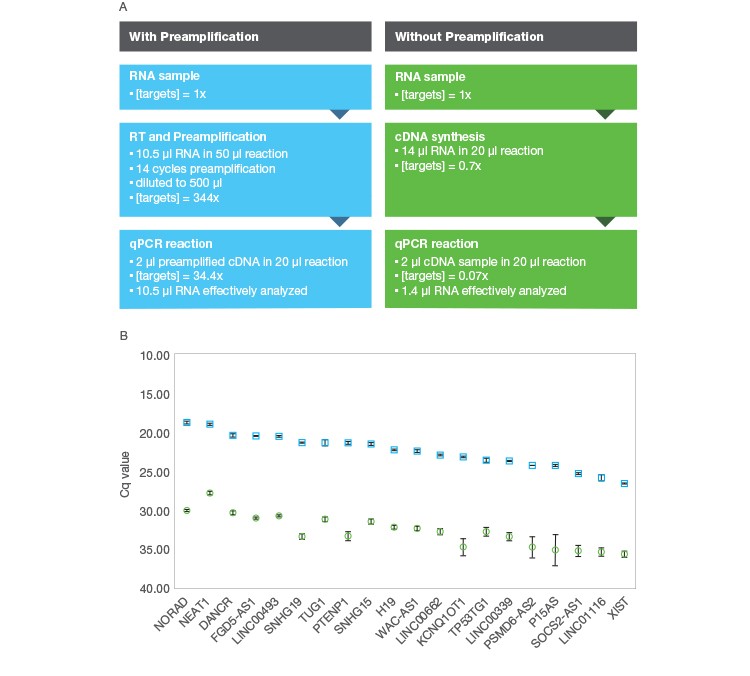 Fig. 2. Comparison of RT-qPCR workflows attempting to maximize sensitivity with and without preamplification. A, shows a comparison of theoretical target levels throughout the course of RT-qPCR using the iScript Explore Kit (■) or without preamplification using the iScript gDNA Clear cDNA Synthesis Kit (■). While the cDNA synthesis reaction can accommodate 14 μl of RNA input, there is no enrichment during the cDNA synthesis, so the qPCR effectively analyzes just 1.4 μl of RNA. In contrast, the preamplification workflow effectively analyses the full 10.5 μl of RNA added to the iScript Explore reaction leading to the effective analysis of 7.5-fold more sample with preamplification. B, results for 20 lncRNA analyzed with both workflows. 1 ng of Universal Reference RNA (Agilent) was used as input for the iScript Explore Kit while 1.33 ng was used with the iScript gDNA Clear cDNA Synthesis Kit. The average Cq across targets for the iScript Explore Kit was 22.6 while the average for the iScript gDNA Clear Kit was 32.7 to analyze from the compared RT-qPCR workflows. The average ΔCq between the workflows was observed to be 10.1. (Note: the theoretical 491-fold difference in target concentration between the methods at the qPCR level is expected to produce a ΔCq of 8.9, but the two workflows use different RT priming methods that are not taken into account.)

5. How do I validate the use of preamplification for my set of targets?

While measuring amplification bias is less relevant to the accuracy of the qPCR results than testing for fold-change bias directly, it is easier to accomplish because it does not require testing a pair of samples with a known fold-difference for the targets of interest. If you want to also test for fold-change bias, one way to do so would be to measure the fold change detected for a given sample dilution, as was done with the iScript Explore Kit in Figure 1.

In addition to testing for bias, it is also good practice to include a negative control and melt curve analysis if using SYBR® Green. The negative control will allow identification of any potential nonspecific amplification products that may occur in the absence of template and help ensure that you select a suitable upper Cq limit for determining positive results (for example, the iScript Explore Kit recommends a Cq limit of 29–33 depending on the protocol used). Melt curves obtained using preamplification should match those obtained without its use.

6. Can I confirm that preamplification is working correctly?

7. What considerations are needed when interpreting data from preamplified samples?

8. What should I consider when selecting a product for preamplification?

It is critical to select a preamplification reagent that ensures that all targets in the reaction can be preamplified with optimal PCR efficiency. We recommend the use of either SsoAdvanced PreAmp Supermix or the iScript Explore One-Step RT and PreAmp Kit.

SsoAdvanced PreAmp Supermix allows for preamplification of up to 400 targets from DNA or cDNA samples,making it ideal for samples with limited template DNA — start with as little as 100 pg of cDNA or genomic DNA from any precious or limited sample such as stem cells, laser capture microdissections, and formalin-fixed paraffin-embedded tissues (FFPE).

The iScript Explore One-Step RT and PreAmp Kit enables the generation of preamplified cDNA for up to 100 targets directly from RNA by combining reverse transcription and preamplification into a single step. The kit also integrates an effective genomic DNA removal step, helping ensure only the transcripts of interest are detected by qPCR.

PrimePCR PreAmp Assays are available for the preamplification of over 28,000 gene-specific targets, including common human genes and targets in 12 other widely studied organisms. PrimePCR assays were designed by prioritizing the gene regions most commonly found in transcript variants, using strict design criteria to ensure optimal qPCR results for each target.

Quinlan A (2015). Too Many Questions, Too Little Sample: Developing a Real-Time PCR Workflow for Monitoring Gene Expression in Limited Samples. Bioradiations, June 9, 2015.

SYBR is a trademark of Life Technologies Corporation.

The Ups and Downs of Biosimilar Development

How to Design Hydrolysis Probes for qPCR

Six Tips for Increasing the Reproducibility of qPCR Experiments

How to Minimize Contamination in qPCR Experiments

1.1k November 10, 2015
Webinars
There are currently no related webinars available at this time. Please check back soon.
Apps