Classifying and understanding genetic variation between populations and individuals is an important aim in the field of genomics. Many common diseases (diabetes, cancer, osteoporosis, etc.) and clinically relevant phenotypic traits are elicited from the complex interaction between a subset of multiple gene products and environmental factors. High resolution melt (HRM) analysis is the quantitative analysis of the melt curve of a DNA fragment following amplification by PCR and can be considered the next-generation application of amplicon melting analysis. It is a low-cost, readily accessible technique that merely requires a real-time PCR detection system with excellent thermal stability and sensitivity and HRM-dedicated software. However, careful sample preparation and planning of experimental and assay design are crucial for robust and reproducible results. The following guidelines assist in the development of such assays.

qPCR with HRM analysis is a robust technology but, as with most assays, good sample preparation will result in solid, quantifiable data. To ensure quality data: 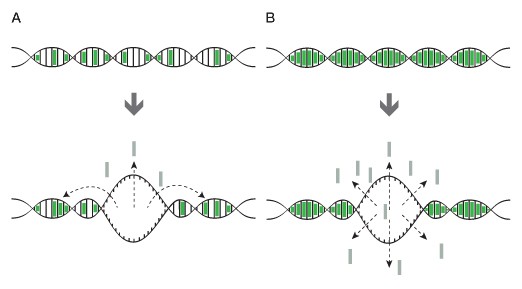 Fig. 1. Saturating and non-saturating dyes. A, when using a non-saturating dye, such as SYBR® Green I, dye molecules can relocate to unmelted regions of dsDNA during melting of DNA, which results in a small or nonuniform temperature shift in the melt curve; B, when using a saturating dye, the dye molecules from the melted region cannot relocate to the unmelted portion of the fully saturated amplicon, resulting in melt profiles that more accurately reflect DNA sequence.

Analyzing short DNA amplicons can assist with genotype discrimination in HRM experiments. Wherever possible, analyze amplicons smaller than 100 bp, especially when sites with a known polymorphism are investigated. It is possible to detect sequence variations with longer amplicons; however, a single base variation influences the melting behavior of a 50 bp amplicon more than a 100 bp amplicon (Figure 2). Reducing amplicon size increases the difference in signal at a given temperature (maximal at the melting temperature [Tm]) between two sequences that differ at only one nucleotide position. This in turn will increase the statistical confidence in calling particular SNPs between samples to give data of higher reliability for publication.

Fig. 2. Effect of amplicon size on melt curves. Difference plots for melt curves of 50 bp (A) and 100 bp (B) amplicons of wild type (A/A, —), heterozygote (A/T, —), and homozygote SNP (T/T, —) are compared. Clustering and the confidence percentage are increased by using smaller amplicons. Each trace represents a replicate. RFU, relative fluorescence units.

A number of programs are available to help design primer pairs and pick target sequences:

The success of HRM analysis depends on the quality of the individually amplified PCR products as much as the post-PCR melting protocol and the specific sequence under investigation. Each experimental parameter must be controlled from sample to sample to ensure successful and reproducible results. Analyzing real-time PCR amplification data prior to HRM analysis can be extremely useful when troubleshooting HRM experiments. The following guidelines are for the development of successful HRM experiments:

Mao F et al. (2007). Characterization of EvaGreen and the implication of its physicochemical properties for qPCR applications. BMC Biotechnol 7, 76.

Simplicity in Imaging: From Conception to Launch