The electrophoretic workflow has undergone few changes since it was solidified as a fundamental tool in life science research in the 1970s. Today, just like then, researchers need to prepare samples, load gels, then perform separation and further downstream analysis, including western blotting. But because the pace of research has accelerated over the past several decades, it has become essential to develop ways to shorten these steps without sacrificing the quality of results. In recent years, Bio-Rad has met this need with the introduction of the Mini-PROTEAN® TGX™ gels (long shelf life gels in Laemmli formulation), the Gel Doc™ EZ imaging system (one-button operation), and now, the Trans-Blot® Turbo™ transfer system.

Recently, researchers in the Aldrin Gomes laboratory at the College of Biological Sciences at UC Davis agreed to assess the potential impact of the Trans-Blot Turbo system on their efforts to further understand the role of proteasomes and troponins in cardiac and skeletal muscle tissues, as well as in protein degradation and cardiomyopathies.

A native of Trinidad and Tobago, Dr Aldrin Gomes decided to specialize in the biochemical differences between normal and diseased hearts in his graduate studies at the University of the West Indies. A significant portion of his research utilized protein separation and purification techniques, making SDS-PAGE electrophoresis an essential tool in most of his experiments. But in a country where resources are scarce, unrelenting heat is destructive to sensitive biological materials, and slow delivery times are common for product orders, Gomes and his colleagues began to analyze the electrophoretic workflow to determine how to make the process as efficient as possible. “Because we performed a lot of electrophoresis, we published some articles whereby we looked at how we could standardize things to improve resolution in our results,” says Gomes. “We heavily researched aliquoting methods, sample buffers (methods for making them and determining actual shelf lives), whether or not buffers can be reused — even minor factors such as gel pouring techniques and plate thickness.”

Since Gomes “grew up,” scientifically speaking, in an environment where experiments must be planned far in advance and resources cannot be wasted, he cultivated the habit of designing experiments and procedures that made the best possible use of tools and time while ensuring optimal results. This followed him through his graduate work and his subsequent career, first as a research associate, then in his current role as assistant professor in the Neurobiology, Physiology and Behavior department in the College of Biological Sciences, and Physiology and Membrane Biology department in the School of Medicine at UC Davis.

Dr. Aldrin Gomes testing the Trans-Blot Turbo system. Transfer occurred in 7 minutes compared to the 1 hour that is typical with tank blotting; the quality of results was comparable in both methods.

Drawn to UC Davis by the convergence of scientific disciplines and the school’s reputation, it is here that Gomes has been able to make significant strides in his field of research. “You hear about young people who exercise and look fine on the outside, but die suddenly in the middle of strenuous exercise from heart attacks,” says Gomes, explaining the driving force behind his research into troponin, a complex of three proteins involved in cardiac muscle contraction. “They look just like us: happy, healthy, no signs of any problem, but tomorrow they are gone.” Gomes explains that many of these people have cardiomyopathies that manifest without causing the heart to enlarge, so the condition is not detectable by x-ray or ultrasound; instead, these types of cardiomyopathies are only visually evident in a biopsy. So developing a way to detect the condition prior to a sudden death episode is critical. That’s where Gomes’s research comes into play.

The genetics of most forms of cardiomyopathies are known; a significant percentage of people who are victim of the sudden cardiac death described above have mutations in muscle proteins. Researchers in Gomes’s lab spend a significant amount of time studying the molecular mechanisms of these mutations. “We have transgenic mice that we are studying, and we know a lot about what is happening,” says Gomes. “We know that the troponin mutation changes calcium sensitivity, so the heart cannot respond as necessary. We know that a lot of ion channels affect overall calcium, changing proteolysis to some degree. We are trying to fit all the pieces together as well as build a model to predict susceptibility to cardiomyopathy-related sudden death from too much stress on the heart.” An important goal of this research is to develop screening methods that can be utilized to determine the presence of mutations and predict the chances for developing severe cardiomyopathies.

The other major research focus in the Gomes lab is the proteasome, the main proteolytic system inside the body that is responsible for degradation of ~80% of all proteins. Specifically, researchers are interested in studying the role of the proteasome in normal and diseased hearts. “In practically every disease that is studied today,” says Gomes, “the proteasome is affected. In some diseases the proteasome is directly involved (Parkinson’s, Alzheimer’s); in others it may be secondary, but it’s involved in everything.” The primary objective is to identify phosphorylation sites that activate and inactivate the proteasome; a secondary effort is searching common compounds that affect its activity. “We have some interesting findings in this regard,” says Gomes. “For example, we have found that several commonly used drugs affect the activity of the proteasome. Proteasome inhibitors have been shown to cure cancer (multiple myeloma), but they can cause cardiac toxicity. So we’re studying these things on multiple fronts.” It is this leg of his research that relies the heaviest on electrophoresis.

In the Gomes laboratory, the need for quality and improved efficiency drives all purchasing decisions. Especially when it comes to electrophoresis, the goal is to perform this fundamental technique with minimal resources — primarily in terms of time and labor — without impacting reliability or reproducibility. Gomes says that in addition to efficiency and quality, his product acquisition decisions are determined by convenience, referring back to his graduate student days when optimizing electrophoresis conditions required flexibility in consumable usage. It is this need for flexibility regarding the use of buffer systems that caused the Gomes lab to switch to the use of Bio-Rad’s Mini-PROTEAN TGX gels. “In terms of our electrophoresis workflow,” explains Gomes, “these gels offer time savings, high quality, and use traditional instead of specialized buffer systems.”

Prior to testing the Trans-Blot Turbo system, researchers in the Gomes lab had primarily been relying on tank blotting, a process that can take as little as an hour, but sometimes requires overnight transfers. In addition, their tank blotting apparatus can only perform two transfers at a time and has high power requirements. With only three power supplies that meet these requirements (which are shared among other devices), the blotting step has been a major bottleneck in their workflow. To conduct his test of the Trans-Blot Turbo system, Gomes ran a protein gel, transferred the proteins to a membrane, then performed Ponceau staining.

Making Electrophoresis and Blotting More Efficient One Product at a Time

Research throughput requirements, as well as a history of analyzing the electrophoresis and blotting workflow for improvements, made the Gomes lab an ideal location for testing the Trans-Blot Turbo system. This latest blotting innovation by Bio-Rad offers speed, high-throughput, and flexibility in accommodating both rapid transfers when paired with transfer packs, and traditional semi-dry transfers when paired with standard consumables. As Gomes has demonstrated, these additional features do not come at a sacrifice to the most important one – the superior transfer efficiency of the Trans-Blot Turbo system. 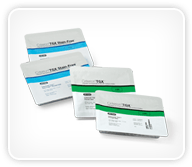 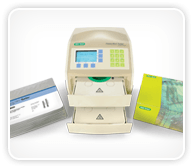 Trans-Blot Turbo Transfer System
Combines traditional semi-dry blotting techniques with our Transfer Packs, which are optimized with filter paper and proprietary buffer, to propagate fast transfer of proteins with minimal preparation time. By providing the entire system in a ready-to-use format, it allows researchers to obtain results faster and easier, with reproducibility that is difficult to achieve by traditional tank and semi-dry blotting methods 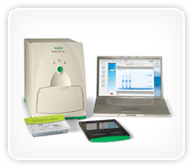