The method of western blotting was first introduced almost 40 years ago. Towbin et al. (1979) presented a method that demonstrated the electrophoretic transfer of ribosomal proteins from a polyacrylamide gel to a nitrocellulose sheet and the detection of those immobilized proteins using radioactively labeled or peroxidase-conjugated antibodies. Western blotting methods have since become a widely utilized method of identifying and quantitating proteins in most life science research labs, but the basic principle has remained fundamentally the same. What has changed is how proteins are detected on a membrane.

Chemiluminescent methods (ECL) have largely replaced radioactive and colorimetric detection due to their high sensitivity and low toxicity. Traditionally, these signals are detected by X-ray film, but due to film’s limited dynamic range (~1.8 logs) chemiluminescent signals tend to saturate quickly and exposure times are determined empirically by eye. Recently, digital imaging technology has managed to match the gold-standard sensitivity and resolution of X-ray film, while having a larger dynamic range (~4 logs) to better prevent signal saturation. However, due to narrow luminescence linearity and a lack of quantitative reproducibility, chemiluminescent methods are still considered to be semi-quantitative (Zellner et al. 2008).

Another challenge in making western blots more quantitative is that around normalizing for protein load variation between samples. Most researchers typically include loading controls such as β-actin, GAPDH, or γ-tubulin, also known as housekeeping proteins, since they have been presumed to be consistently expressed across a variety of samples and unaffected by cellular manipulations. However, more and more evidence suggests that these genes can be differentially expressed (Castaño and Kypta 2008, Dittmer and Dittmer 2006, Eaton et al. 2013). Due diligence is required to make sure that expression levels are in the linear range, which can be accomplished by running a dilution series. Often overloading leads to saturation, which can greatly impact the scientific integrity of experiments and their resulting conclusions.

Recent advances in digital imaging technology and fluorescent western blotting reagents have resulted in several of these challenges being overcome.

Multiplex fluorescent western blotting allows the simultaneous detection and differentiation of multiple proteins on a single blot without the need for stripping and reprobing or cutting blots. Multiple proteins are recognized by probes conjugated to fluorophores that have distinguishing emission spectra. This makes the process of visualizing multiple proteins less complicated since the hassle of ensuring that protein isn’t lost during the stripping process or that a blot is cut incorrectly disappears. In addition, this method helps save precious samples and time and effort and makes quantitation more dependable. One of the benefits of visualizing proteins in this manner is that distinguishing related protein species, that is phosphorylated or acetylated species, or any two proteins with similar molecular weights also becomes easier. 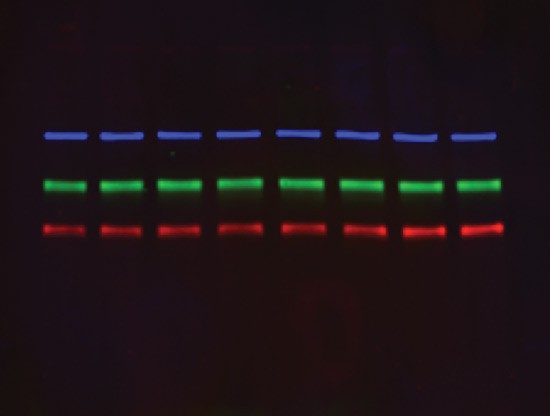 Another reason that fluorescent western blotting is becoming increasingly popular is due to the advancements in fluorescent probes and imaging technology. Newly developed fluorescent probes are more sensitive than basic chemiluminescent substrates and have equal sensitivity to maximum sensitivity chemiluminescent substrates. This is due to the fact that they have more light-receptor molecules and the advent of near infrared (NIR) emission, which minimizes membrane autofluorescence.

Fluorophores have not only gotten brighter but also have increased photostability. In fact, blots probed with fluorescent probes can be stored dry and reimaged months later with no loss of signal or efficiency (unpublished data).

The availability of protocols with specific recommendations for method and antibody choices is making process optimization easier. See Silva and McMahon (2014) and Eaton et al. (2014) for examples.

ECL is a trademark of GE Healthcare.

2.4k November 9, 2016
Webinars
There are currently no webinars. Please check back soon.
Apps