Immunotherapy: The Next Frontier for Cancer

Does the human body have the capability to heal itself? The idea of immunotherapy, harnessing the body’s own immune system to eradicate disease, has moved from the realm of possibility to something much more tangible. Interestingly, this promising therapy is not a new concept and has actually existed for more than 125 years, originating when William Coley, MD introduced the notion that the immune system could be useful in the treatment of cancer. He had observed that bone and soft tissue sarcoma patients experienced remission as a result of a concurrent bacterial infection and began to treat patients with heat-killed streptococcal organisms that he called Coley toxins. The toxins he administered to patients resulted in a 50% near-complete remission rate (Institute for Clinical Immuno-Oncology 2015).

Since the early days of Dr. Coley, the field of immuno-oncology has emerged and is rapidly evolving to focus on tumor-specific immune responses to enhance understanding of cancer resistance. Cancer has the ability to evade or escape the normal immune response and this unique ability forms the basis of immunotherapies that try to stimulate the body’s own immune system to mount an anti-tumor response (Pandya 2016). Immunotherapies generally work in one of two ways, either by stimulating the body’s own defense system to work smarter to attack the invading cells or by augmenting components of the immune system and reintroducing them into the patient so that the immune system can work correctly. More specifically, therapies have been developed to target the specific characteristics of cancer cells such as those that evade growth suppressors, activate invasion, enable replication, induce angiogenesis, resist cell death, or sustain signaling.

With the approval of interferon in 1986 and both interleukin-2 and the monoclonal antibody Rituxan (rituximab) in the 1990s, the field took a giant step forward. One-third of patients receiving interleukin-2 for advanced melanoma and relapsed metastatic renal cell carcinoma experienced a durable response, defined as a lengthy positive reaction to tumor therapy lasting at least one year.

In the last decade, researchers have been studying the biological mechanisms that initiate and control cancer cell growth, which includes an effort to understand the tumor microenvironment and the influence of checkpoint inhibitors. The goal with this trajectory of studies is to develop therapies that are personalized for the treatment of the individual patient and their particular type of cancer. More than 240 immuno-oncology treatments, trending toward personalized therapies, are being tested for various types of cancer (Table 1, PhRMA 2017), including:

The complex, variable nature of cancer has been a constant treatment challenge because cancer cells are evasive and rapidly develop therapeutic resistance. Despite the promising initial results from personalized therapies, a rather low number of new approved drugs have resulted. These targeted therapies were first developed following the sequencing of the human genome and the development of high-throughput sequencing techniques. Unfortunately, mortality rates did not significantly improve and most patients relapsed. In addition, some targeted therapies were found to further genetic irregularities that lead to metastasis or recurrent disease (Begg and Tavassoli 2017). As a result, the standard of care continues to rely heavily upon surgery and a combination of chemotherapeutics with toxic side effects. The newer immuno-oncology agents are often added as part of a combination therapy at the later stages of cancer treatment when initial attempts at treatment have failed. As the incidence of cancer increases among the aging population, more than marginal improvement in survival rates is desired. Challenges remain in reliably determining which patients will benefit from these newer therapies and when will be the ideal time to initiate or add a therapy.

Let’s take a closer look at a couple of the more promising immunotherapies.

CAR-T therapies offer a new approach for the treatment of solid tumors. A patient’s own immune cells are collected, genetically altered, multiplied, and finally returned (Figure 1). This process is known as adoptive T-cell transfer and the alteration occurs via retroviral gene transfer of the CAR-T cell receptors. The re-engineered CAR-T cells possess cytokine-producing and cytolytic activity targeted at specific antigens on the tumor cell surface. Twenty-one of these therapies are currently being tested in clinical trials and those focused on B-cell malignancies have demonstrated exceptional clinical outcomes (Samudio and Aversa 2017).

Fig. 1. CAR-T therapy. T-cells are sometimes blocked from recognizing cancer cells. With CAR-T therapy, blood from a patient is filtered to remove T-cells, a cancer targeting gene is inserted into the T-cells in the lab, and the T-cells are returned intravenously to the patient. These engineered T-cells can recognize, target, and kill cancer cells. Image modified from PhRMA 2017.

The T-cell, one of the white blood cells, plays an important role in many immunotherapies. In healthy people, T-cells identify and kill infected or abnormal cells including cancer. To activate T-cells to become antigen-specific, CARs combine the Fv portion of monoclonal antibodies with the cellular signaling from the CD3 molecule.

T-cell regulation is vital for tumor development since T-cells can eliminate cancer cells if they are functioning properly (Figure 2). By regulating T-cell response, some proteins act as immune checkpoints providing information about tumor behavior. Immune checkpoint inhibitors attempt to restore the immune response by targeting programmed death protein (PD-1), its ligand PD-L1, or cytotoxic T-lymphocyte associated protein (CTLA-4). Both CTLA-4 and PD-1 are the best characterized immune checkpoints, but are part of a much larger group of co-inhibitory molecules. It is believed that CTLA-4 limits T-cell activity during early stages of the immune response whereas PD-1 reduces T-cell activity at a later stage. 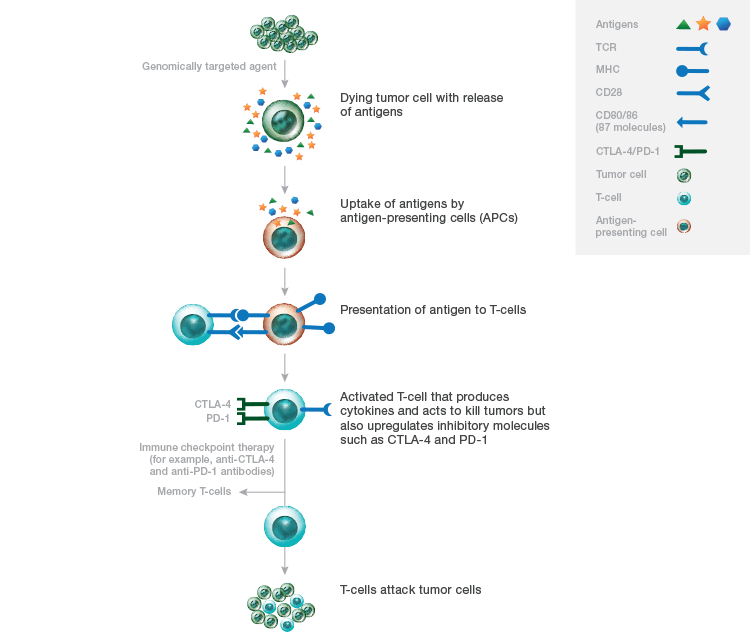 The first monoclonal antibodies developed against PD-1, Opdivo (nivolumab) and Keytruda (pembrolizumab), were approved for use in the US in 2016 to treat advanced melanoma and non-small cell lung cancer. Patients with melanoma experienced objective response rates (% of patients whose cancer shrinks or disappears) of 25–40% with durable response rates lasting more than two years (Medina and Adams 2016). Survival outcomes for advanced melanoma patients have been high with 40% of patients still living three years after starting treatment. There are 45 checkpoint modulators currently in development (PhRMA, 2017).

Despite the progress that has been made with immunotherapies, current response rates remain low and associated toxicities high. Finding a biomarker can be of enormous aid in determining which therapies work for which patients. Biomarkers are loosely defined as any biological entity that represents the physiological state such as tumor tissue, blood, or urine and are classified as diagnostic, prognostic, or predictive. There is currently a feverish search to identify predictive biomarkers for each immunotherapy as they are developed (Gulley 2017).

Currently, the most popular drug target is PD-1; however, the best known and cited biomarker target is PD-L1. In fact, of the top 24 companies (by market capitalization, Feb 2017) investigating and developing immunotherapies, PD-L1 is the biomarker most highly cited in their clinical trials (Choudhary and Moriarty 2017). Biologically, PD-L1 expression on myeloid or T-cells may actually be more indicative of a response to immunotherapies (Awad and Hammerman 2015). In addition to cancer, PD-L1 is also an indication of HIV, lymphoma, sepsis, asthma, and blood disorders. Currently, several anti-PD-L1 molecules are in development as immunotherapies and have demonstrated positive results in clinical trials (Ma 2016).

Promise for the Future

Many challenges remain in the search for less toxic treatments for cancer, such as discovering additional antigens besides PD-1, PD-L1, and CTLA-4. Several therapeutics have already demonstrated efficacy that is beginning to radically change the way cancer is treated. There is growing excitement surrounding the possibility of using these agents at the earlier stages of cancer treatment and perhaps even as a first-line treatment. The next objective in the immuno-oncology journey will focus on the urgent need to identify selective targets and develop personalized immunotherapies tailored to individual patients. In addition, tools such as biomarkers will provide predictive as well as prognostic information. The future for cancer immunotherapies is hopeful as new advances are made toward better adjunctive or curative treatments.