In collaboration with Amplion Inc., we investigated biomarker usage within 24 companies focused on immunotherapy. This article shares exciting insights from our analysis, including which biomarkers are the most popular and how those biomarkers are being utilized by each company.

What is a biomarker? Biomarker, or biological marker, is a term used to describe any measurable biological indicator or characteristic that can reflect a physiological state. More specifically, it has been defined as:

One of the better known examples of biomarkers is seen in diabetes. In 1976, almost two decades after hemoglobin A1c (HbA1c) was first separated from other forms of hemoglobin, Koenig et al. proposed that the molecule could be used to reflect the degree of glycemic control in diabetes patients. This was validated in 1990 when Larsen et al. showed that diabetes could be managed based on levels of HbA1c. Since then, HbA1c has been touted and widely used as the biomarker of choice in clinical trials for assessing the efficacy of antidiabetes drugs (Caveney and Cohen 2011) and is even used in many over-the-counter treatment regimens. Other examples of biomarkers include body temperature for fever, blood pressure for the risk of stroke, prostate-specific antigen (PSA) for prostate cancer, and endophenotypes for schizophrenia.

Biomarkers are now being utilized in drug development and regulatory decision making as they have the potential to improve the efficiency of the drug discovery and development process. In particular, if specific biomarkers that monitor or reflect the status of a disease can be identified, then researchers can use the changes in these biomarkers to better understand how effective the new therapy is against a particular disease. Including that data in a clinical trial would allow researchers to focus their efforts and resources on therapies that prove to be the most effective. In turn, this would reduce the time and cost of bringing a new drug to market. All of these benefits are encouraging to companies in the biopharmaceutical industry.

One field in the biopharmaceutical industry in which biomarkers are proving to have great impact is immunotherapy. Immunotherapy or immuno-oncology is a major focus area for biopharma, and most if not all large biopharma companies have immunotherapy programs. The global immunotherapy drug market was valued at USD 108.4 billion in 2016 and is projected to reach USD 201.5 billion by 2021. Immunotherapy is popular because it allows drug developers to create treatments that use an individual’s own immune system to fight their cancer, completely changing the way the disease is treated. The biggest advantage of this, and the reason that immunotherapies are so useful, is their adaptive nature. As an individual’s cancer develops and mutates, immunotherapies can help the immune system evolve its anti-cancer response by either stimulating components of the immune system that help fight the disease or suppressing procancer signals from cancer cells.

Within immuno-oncology, the most well-known target and cited biomarker is PD-L1 or programmed death-ligand 1. In fact, of the top 24 companies developing immunotherapies (by market capitalization as of February 2017; Figure 1), PD-L1 is the most cited biomarker in their clinical trials. PD-L1 is thought to help cancer cells evade the immune system. In addition, it is also implicated in HIV, lymphoma, sepsis, asthma, and blood disorders. Due to its potential role in cancer, a number of anti-PD-L1 molecules are in development as immunotherapies and have shown promising results in clinical trials (Ma et al. 2016). Market options already using FDA-approved PD-L1 inhibitors include atezolizumab (for bladder cancer and non-small cell lung carcinoma) and avelumab (for non-small cell lung and Merkel cell carcinomas). 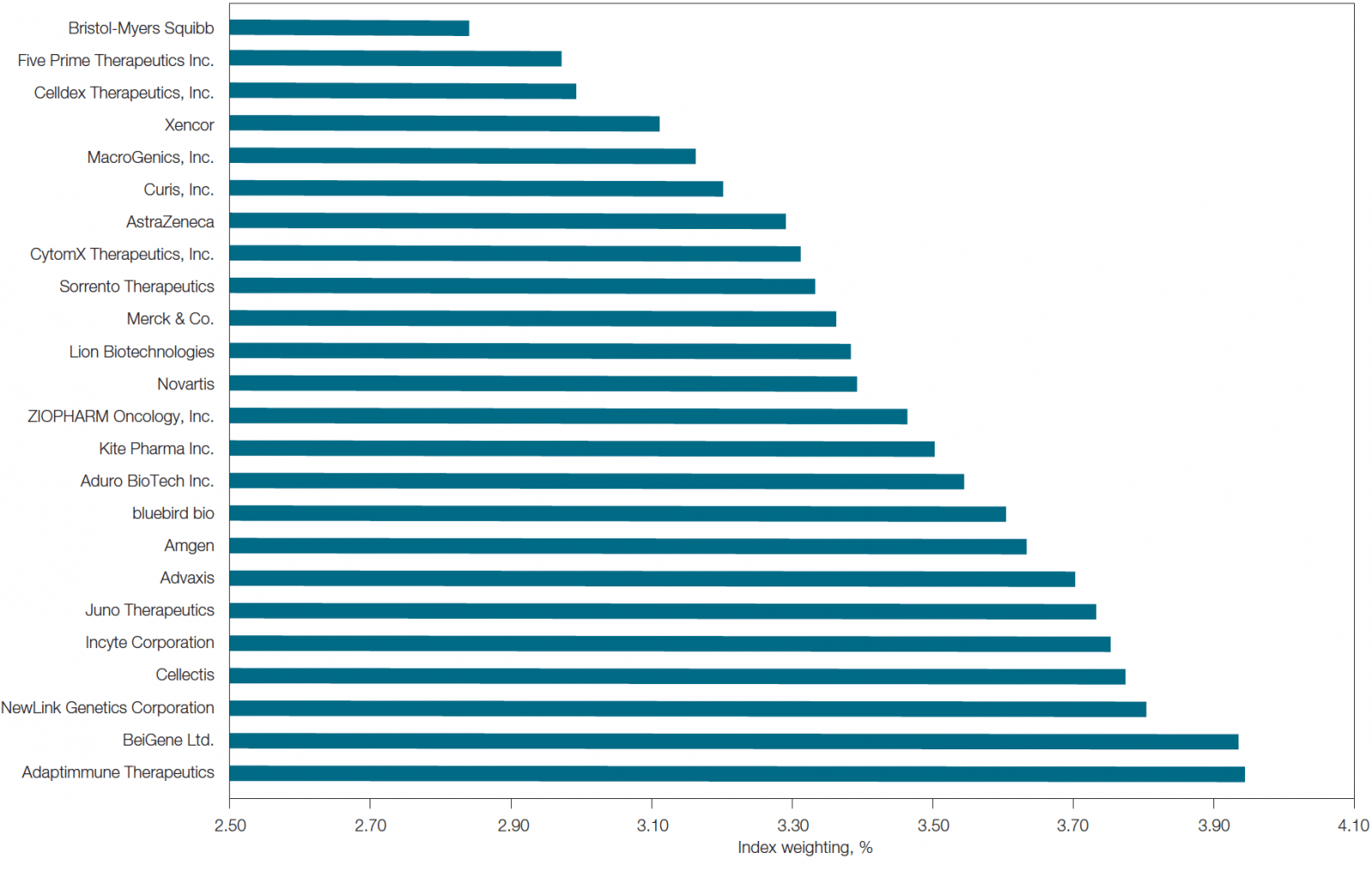 Fig. 1. List of top 24 immunotherapy companies by market capitalization. This list was determined using the equal-weighted Loncar Cancer Immunotherapy Index (LCINDX; loncarindex.com), which tracks the progress of new immunotherapies developed by major contributors in the immuno-oncology sector. Data current as of February 2017.

Though PD-L1 is by far the most cited biomarker in clinical trials, 154 other biomarkers are being evaluated for their effectiveness as proxies for prognosis in various diseases (Table 1).

* Only biomarkers mentioned seven or more times are listed.

Table 1. List of biomarkers and their use in clinical trials by the top 24 immuno-oncology companies.

Fig. 2. Diseases being studied across biomarker-associated immunotherapy clinical trials being carried out by the top 24 companies in the field.

Within clinical trials, biomarkers can be classified based on their function, which can be diagnostic, prognostic, and predictive.

Of the biomarkers being evaluated by the top 24 immunotherapy companies, the majority of them could be categorized as predictive of outcome (Figure 3). This is not surprising as pharma companies are looking to improve the success rates of their clinical trials. By including predictive biomarkers and stratifying patient populations, they can identify patients who will respond to the therapy and thus increase the success rate of the trials.

Though immunotherapy is a relatively new field, many of the clinical trials we identified that utilize biomarkers are already moving to later stages (Figure 4). This emphasizes companies’ drive to get these therapies to market in order to be the first to offer new personalized medicines in the continuing race to develop novel treatments for complex diseases. 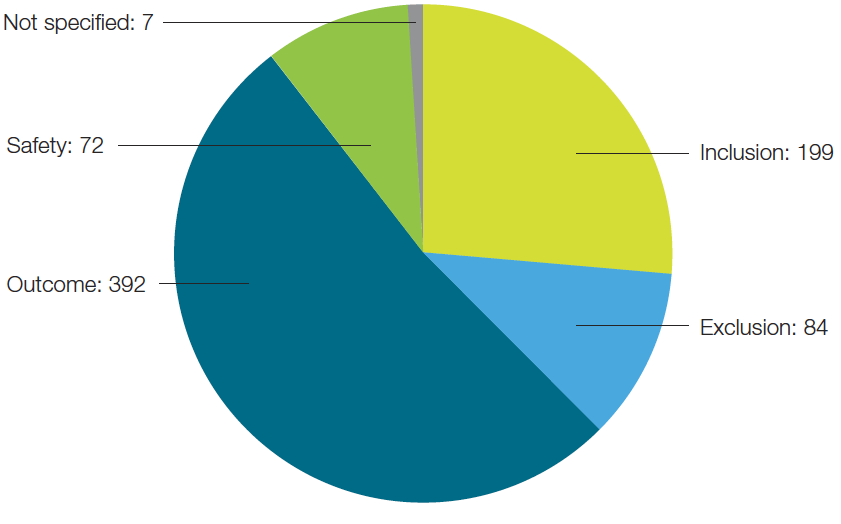 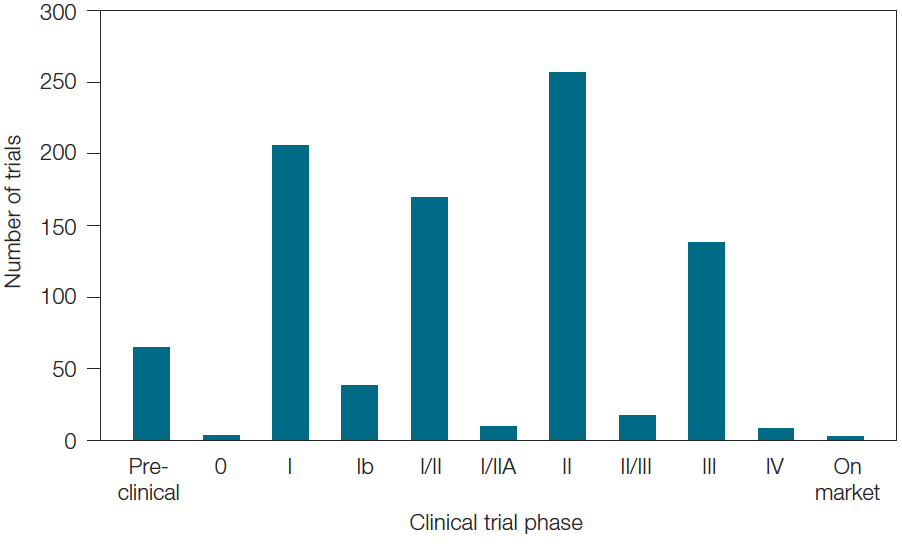 Biomarker intelligence comes from having an overall understanding of disease pathways and the characteristics and features of biomarkers (biomarker landscape) and is required to truly understand the utility of biomarkers. The use of biomarkers in drug discovery and development is increasing. They are being used across all stages, from cell based efficacy biomarkers in early discovery to safety markers in preclinical studies to prognostic markers in clinical trials. Having a thorough understanding of the biomarker landscape and developing strong biomarker intelligence is paying off for companies as they see their costs decrease and success rates increase. Incorporating a biomarker strategy into drug programs is leading to better medicines for all.

The data presented here were generated through a collaboration between Bio-Rad Laboratories, Inc. and Amplion Inc. Amplion’s BiomarkerBase tool houses information about biomarkers in clinical use and provides a forum where this information is readily accessible.

BiomarkerBase is a trademark of Amplion Inc.

The Importance of In Vitro Assays in the Development of Biosimilars