The power of gene editing provides the ability to change the biology of a cell or whole organism, enabling the investigation of a host of difficult or previously impossible to interrogate biological processes. As more and more gene editing tools are discovered and developed, the applications for gene editing will only continue to expand. Here we use CRISPR-Cas9 editing of intracellular adhesion molecule-1 in a prostate cancer cell line to illustrate a method that incorporates enrichment and single-cell sorting to allow monocultures of edited cells to be generated in a reliable and more rapid manner.

Intracellular adhesion molecule-1 (ICAM-1) plays an important role in stabilizing cell-cell interactions and in mediating cell signaling during the immune response. It is a cell surface glycoprotein typically expressed in immune and endothelial cells and binds to integrins. ICAM-1 expression can be stimulated by interleukin-1 (IL-1) and tumor necrosis factor alpha (TNFα), which facilitates leukocyte extravasation through endothelial cells into underlying tissue. ICAM-1 expressed by respiratory epithelial cells is also the binding site for rhinovirus, the causative agent of most common colds. Additionally, ICAM-1 is associated with a variety of cancer cell types and has been shown to play both a positive and a negative role in cancer cell invasion and metastasis. To investigate the effect of decreased ICAM-1 expression on various cell signaling pathways, we analyzed gene and protein expression in a cellular knockout of ICAM-1. We found that a reduction of ICAM-1 expression through CRISPR-mediated gene editing altered gene and protein expression in the prostate cancer cell line PC3. In addition, we demonstrate a streamlined method for CRISPR gene editing that includes enrichment and single-cell sorting flow cytometry.

After designing your gene editing strategy, the first step in the CRISPR gene editing workflow is to identify the best method for delivering the CRISPR-Cas9 system into your cells of interest, be they animal or human, tumor-derived or wild type. Transfer efficiency and subsequent cell viability are very important when considering which method to use. We designed a knockout strategy that uses knock-in of a donor template containing the GFP and puromycin resistance genes to disrupt ICAM-1. PC3 cells were transfected using either TransFectin™ Lipid Reagent or the Gene Pulser Xcell™ Electroporation System. GFP fluorescence was used as an initial readout for successful transfection (Figure 1).
A 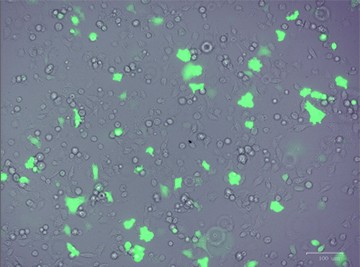 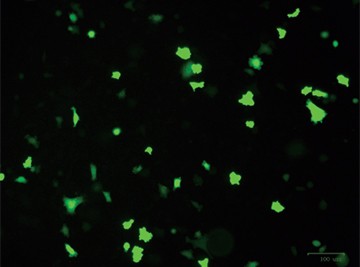 Fig. 1. Optimizing transfection efficiency. PC3 cells (ATCC) were cultured in Ham’s F-12 Nutrient Mix (GIBCO) with 10% HyClone FBS (GE Healthcare), 1% Penicillin-Streptomycin (GIBCO) and maintained at 37°C and 5% CO2 for 7 days. Prior to transfection, cells were counted using the TC20™ Automated Cell Counter. One of two different CRISPR-Cas9 plasmids targeting ICAM-1 (OriGene) and a donor vector containing left and right homologous arms as well as a GFP-Puro functional cassette (OriGene) were transfected into PC3 cells using either the Gene Pulser Xcell Electroporation System or lipid-mediated transfection with TransFectin Lipid Reagent. Media of both electroporated and TransFectin treated cells was replaced with fresh growth media 24 hours after treatment. The ZOE™ Fluorescent Cell Imager was used to assess GFP expression in transfected cultures and showed that the plasmids had been successfully transferred into cells. Merged (A) and GFP channel (B) view of PC3 cells 24 hours after transfection using the Gene Pulser Xcell System captured using the ZOE Fluorescent Cell Imager. TransFectin and the Gene Pulser Xcell System provided similar levels of transfection efficiency (data not shown). 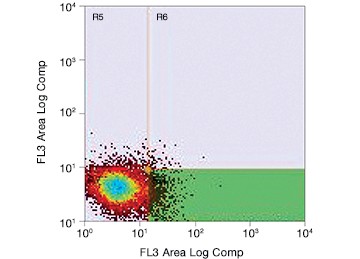 Following transfection, you need to enrich for your cells of interest. This step speeds up your workflow and reduces unnecessary spending on reagents and consumables by allowing identification and expansion of only those cells that carry desired edits. Enrichment also reduces the number of passages cells undergo, ensuring healthy cells for downstream analysis. We enriched for successfully transfected cells by sorting GFP-positive PC3 cells using the S3e™ Cell Sorter (Figure 2). After enrichment and subsequent puromycin selection, the S3e Cell Sorter was used to isolate single GFP-positive, puromycin resistant cells for subsequent expansion. The ZOE Cell Imager allowed early confirmation of successful enrichment pre- and post-puromycin treatment. Compared to traditional protocols, enriching for GFP-positive cells increased the number of viable cells available for single-cell sorting and colony growth following puromycin selection (Figure 3). This enrichment step brought cells to the single-cell sort stage approximately 30 days earlier than a protocol without enrichment (Figure 4).
A 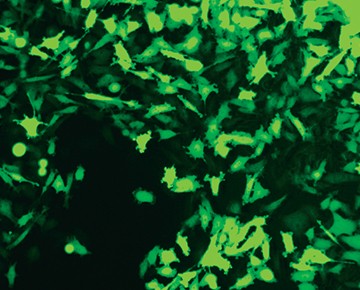 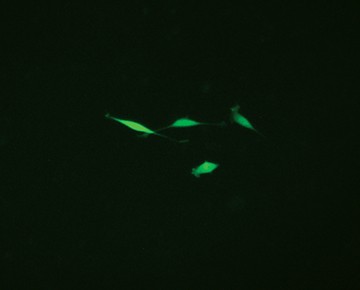 Fig. 3. Comparison of enriched and nonenriched cultures. Transfected cells were cultured for 14 days. The live GFP-positive cell population was enriched from the mixed cell culture using the S3e Cell Sorter. Puromycin selection 14 days later further selected for edited cells. Significantly more puromycin resistant cells were available earlier for single-cell sorting from the enriched population (A) than the nonenriched cultures (B). Live GFP-positive cells were sorted using the S3e Cell Sorter and single-cell isolation and GFP fluorescence were confirmed using the ZOE Cell Imager (data not shown). Cells were then passaged for 2 weeks until 80% confluent for further analysis. 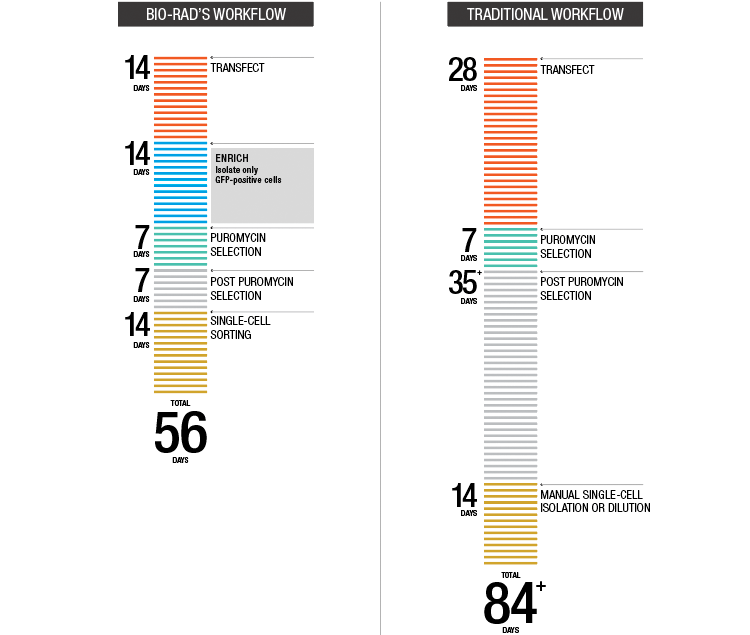 Once you have enriched your cells of interest, you need to confirm that you have successfully edited your target cells before moving on to downstream assays. This can be accomplished through direct detection of edits using genomic methods or through indirect detection using cellular or proteomic methods. Protein analysis by western blot (Figure 5) and immunocytochemistry (ICC, Figure 6) showed a complete loss of ICAM-1 expression in our edited cells. 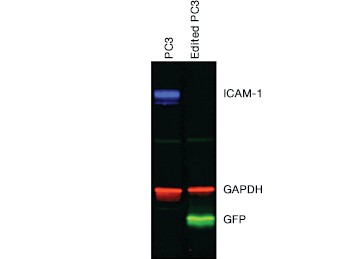 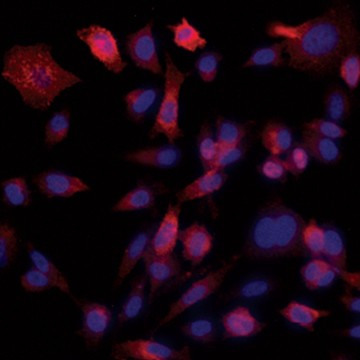 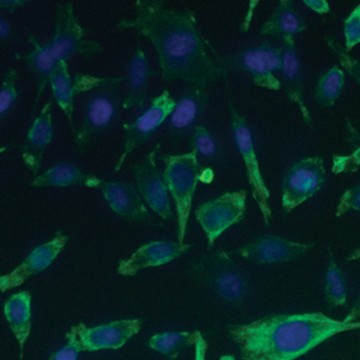 Now that you have confirmed that your cells are correctly edited, you can begin to investigate their phenotype. You may even wish to further perturb your system with a drug as part of a cell-based assay during target or lead discovery and validation. Using PrimePCR™ Real-Time PCR Assays and Bio-Plex® Multiplex Immunoassays, we were able to show gene and protein expression of ICAM-1 in our knockout cell lines upon stimulation with TNFα, albeit to a lesser extent than in control unedited PC3 cells. We found expression changes in a number of genes and proteins related to the extracellular matrix and other cell signaling pathways (Figure 7 and data not shown).
A 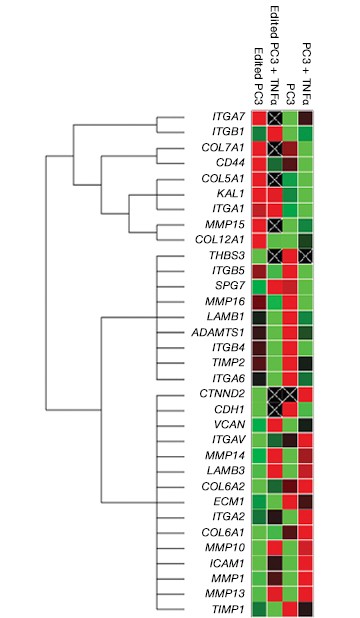 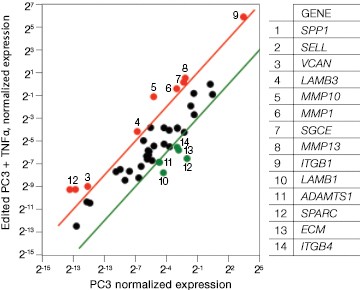 Bio-Rad’s thermal cyclers and real-time thermal cyclers are covered by one or more of the following U.S. patents or their foreign counterparts owned by Eppendorf AG: U.S. Patent Numbers 6,767,512 and 7,074,367.