Need an easy way to pick the right fluorophore for your next fluorescent western blot?

Get our handy fluorophore reference poster for western blotting and gel imaging. 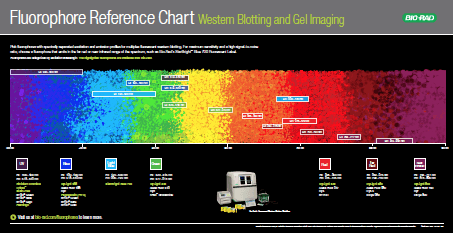 Fluorescent dyes or fluorophores are molecules that have the ability to absorb light energy at a particular wavelength and emit light at a lower energy and thus longer wavelength. This typically means that the color of light absorbed is different from the color of light emitted. Theoretically, fluorophores are able to undergo the cycle of absorbing light, becoming excited, and emitting light indefinitely. Since this means that a fluorophore molecule can produce a continuous fluorescence signal that can be collected in a cumulative way by a detector, fluorescence is considered to be a very sensitive technique. In essence, fluorescence intensity remains linear over a relatively long period of time and over many orders of magnitude of the expression level of a protein of interest. 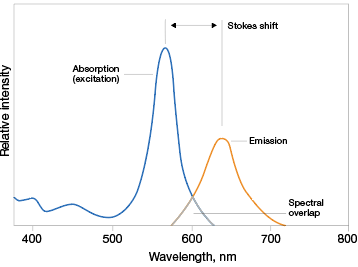 Know the excitation and emission maxima of the fluorophores you wish to work with. Some fluorescent molecules have sharp and narrow Ex/Em scans while some have wider, flatter scans. The optics (excitation light source and emission filters) of your imaging instrument have to work with these properties, so it is critical to know these before picking fluorophores (Figure 3). 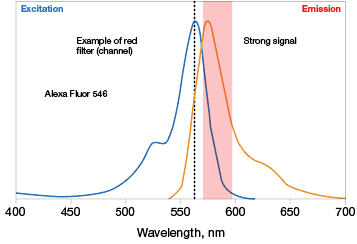 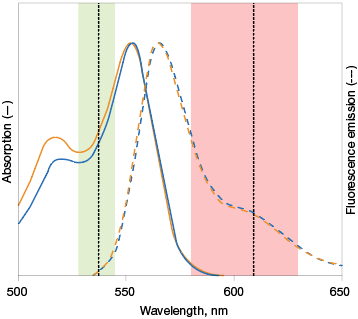 Pick fluorophores with a wide Stoke’s shift since, for a particular fluorescent molecule, the wider the Stoke’s shift, the less the spectral overlap, and the cleaner the data (Figure 2).

When using two or more fluorophores in the same experiment, make sure they are mutually compatible. The more spectrally separated the Ex/Em of each fluorophore are from the other, the better and easier quantitation will be. For multiplexing, it is best to pair fluorophores that have Ex/Em spectra with minimal overlap (that is, in the area under the curve).