Bedtime stories in Dr David Schaffer’s childhood home were often not standard fairy tales. With both parents in careers as biomedical researchers (his mother in drug development and clinical trials for a major pharmaceutical company and his father, in cardiovascular research and a pharmacology professor) much of the conversation as far back as Schaffer can remember centered on biology and science. “I remember being five years old and sitting on my father’s lap, while he was teaching me the names of microorganisms,” says Schaffer. In many ways, a life dedicated to solving biological problems seemed predetermined, but Schaffer did deviate slightly from the examples and influences of his parents and initially concentrated on the engineering aspects of the field.

Schaffer completed his undergraduate work at Stanford University in chemical engineering and graduate work in chemical engineering at MIT. His postdoctoral work was in the laboratory of Dr Fred Gage, a neurobiologist at the Salk Institute for Biological Studies. “For two years, I was the only engineer at the Salk Institute, and had immersed myself in the rich world of biology in a lab that had been making some paradigm-shifting discoveries in the field of neural stem cells and understanding how the adult brain continues to add neurons,” says Schaffer. It was during this pivotal period that Schaffer became fascinated with applying engineering approaches to the study of problems in stem cell biology.

Upon completion of his postdoc work, Schaffer accepted an assistant professor position at the University of California, Berkeley and for the past ten years the main focus of his laboratory has been developing engineering systems that provide insight into the signals that control cell function. Schaffer credits California’s Proposition 71 (a voter initiative passed in 2004 that created a framework to legalize, regulate, and fund stem cell research in the state) as having “provided us with incredibly valuable resources to be able to research stem cells — California is unique in that respect.”

Researchers in the Schaffer laboratory are primarily engaged in understanding the transcriptional regulation of the key genes involved in stem cell functions. “There are several key genes that are absolutely necessary for a stem cell to function as a stem cell,” explains Schaffer. “In the case of human embryonic stem cells, pluripotency genes must be on and functioning. So examining the state of those genes — of the DNA inside the cell — is critical for our work.” 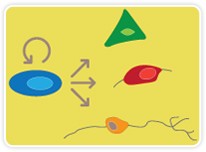 Stem cells. Stem cells are defined by self-renewal and differentiation.

Schaffer describes the two main applications of stem cell research as using stem cells for therapeutic purposes (cell replacement therapy and regenerative medicine) and gaining insight into the mechanisms of disease (creating model systems of a diseased mature cell type). However, there have been major challenges to overcome before this potential can be realized. “There is no situation in which a grown adult has access to embryonic stem cells that are a perfect genetic match for them,” explains Schaffer. “So if you’d like to use embryonic stem cells for therapeutic purposes, you might have tissue rejection issues.” And as far as using stem cells to create diseased cells (for example, neurons in the case of Alzheimer disease), “The problem with using human embryonic stem cells is that almost by definition — the fact that you’ve made a stem cell line out of it — you’ll never have the opportunity to know if that person, that embryo, would have contracted Alzheimer disease 70 years into the future.”

The Power of Reprogramming

The recent advent of “induced pluripotency” or “reprogramming” has made it possible for researchers to take any cell in the body and essentially turn back the clock and create an embryonic-like cell. So now not only can the clock be moved forward to create a more mature stem cell, neuron, or B cell from a pluripotent stem cell, but researchers can take mature cells and introduce certain genes and turn the clock backward, reprogramming the cell into an embryonic state. “What you can do then,” explains Schaffer, “is take a stem cell, B cell, or keratinocyte from a 70-year-old person who has Alzheimer disease, turn back the clock on it, and then turn the clock forward again and basically use it as an infinitely renewable resource to create as many diseased neurons as you’d like.” This capability allows researchers to study the mechanisms of disease as well as the effects of potential drugs on disease. Further, this reprogramming technology virtually eliminates limited resource issues that have previously stymied rapid progress in the field.

But the process of reprogramming can be laborious and inefficient. To study the mechanisms of cellular reprogramming and gain insight into the state of genes critical for stem cell function — whether the genes are on or off and how close they are to being in an embryonic state — has required methods like methylation analysis and chromatin immunoprecipitation. But while these tests provide detailed molecular readouts and valuable information about the gene(s) involved, they require significant time to perform; there has not been a quick and easy way for researchers to check gene status mid-experiment. In addition the reprogramming process itself is inefficient with experiments typically requiring 10–20 attempts that can all have varying results. That’s why the Schaffer laboratory was interested in testing Bio-Rad’s EpiQ chromatin analysis kit.

Epigenetic processes control gene expression by altering chromatin structure. The chromatin analysis kit assesses chromatin structure in cultured cells, providing insight into gene expression in an easy-to-use method that can be performed the same day cells are harvested in approximately three hours. “What the kit has enabled us to do is study the state of genes during the reprogramming process in a very rapid and efficient way,” explains Schaffer. “We are now able to obtain information about whether reprogramming is proceeding or how it is proceeding ten times as fast as other methods we’d been using. Plus, the assay tells us whether or not it’s even worthwhile going through the trouble to perform deeper analyses.” Unlike other tools that don’t provide insight into gene states until all experimentation has been completed, the kit has enabled rapid examination of the state of the genes that must be turned on during reprogramming and provides researchers with early views of what does go wrong or what can go right during the reprogramming process. “It tells us how quickly those genes start turning on and whether or not their lack of turn on at an early stage is diagnostic for a low efficiency of reprogramming at the end,” says Schaffer.

The Schaffer laboratory is also using the kit to study HIV latency, attempting to understand how the HIV gene turns on and off once it has inserted itself into the genome of a cell. “We’re interested in understanding the state of the HIV gene in a genome and how its structure — its chromatin structure, its DNA structure — how this relates to the dynamics by which the virus turns on or stays off,” Schaffer explains. Clearly, ongoing research in the Schaffer laboratory has the potential to unlock the mysteries surrounding some of the most degenerative and life-threatening diseases of our time. And the EpiQ chromatin analysis kit is a novel tool that is helping to rapidly and efficiently continue to move this research forward.