On any given day Andy Riddell used to face the following dilemma: should he run routine cell sorting experiments for the scientists that use his flow cytometry core facility or instead spend time stretching the capabilities of his instruments to accommodate requests for more complex sorts. This dilemma, shared by many flow core managers, has one not-so-simple cause: even simple sorts need Riddell’s full attention because traditional cell sorters require extensive training to run.

Riddell, however, has found a way to take the “or” out of this scenario. Scientists in his facility perform routine 1–4 color sorts by themselves using the S3e Cell Sorter, freeing him to tackle the complex questions that are brought to his lab, such as how to sort cells based on the tiniest differences in expression.

To Sort or to Innovate

Riddell runs the flow cytometry core facility at Cambridge University’s Wellcome Trust MRC Stem Cell Institute. Managing a core facility is like running a business and one important consideration, he explains, is that you are paying for time that an instrument is not being used. So the solution seems simple. Schedule lots and lots of sorts.

But there is a second ingredient to running a successful core: you need to continually expand your capabilities to meet your researchers’ evolving needs. Even though most of the scientists using his facility ran one- or two-color experiments they still required supervision, because the traditional cell sorters in his facility were too complicated for scientists to run themselves. This meant that every scheduled sort was time not spent developing new capabilities.

“Core labs should be developing assays,” explains Riddell. While most sorts can be addressed with existing technology, some experiments push its limits. People need to sort faster because their cell lines are particularly sensitive or they need higher resolution when cells differ only slightly in expression levels. “But if you have a large number of people using the facility you have no time to address these questions,” says Riddell. “We were looking for something to take some of the basic sorts away from me so that I could concentrate on expanding the facility’s capabilities.” The S3e Cell Sorter, he says, was the perfect fit.

Simple to Learn, Even Simpler to Operate

The S3e Cell Sorter is a benchtop instrument designed to sort 1–4 colors with the same precision and accuracy as a traditional cell sorter but with a fraction of the required user intervention. To accomplish this, Bio-Rad paired with Propel Labs and automated key processes, like drop delay calculation and laser alignment, that are integral to successful cell sorts but time-consuming and technically difficult to perform. The result is a cell sorter that does not require someone like Riddell to supervise simpler sorts.

Scientists who use Riddell’s facility now run one- and two-color sorts independently after minimal training. “There is a big play button and sort button and stop button,” says Riddell. “You can’t get much simpler than that.” If someone has used an analyzer, he explains, with a few extra mouse clicks they can sort on the S3e Cell Sorter. “I spend maybe 10 minutes training people [to sort], just to give them the extensions to the software. Everything else is worked out.” 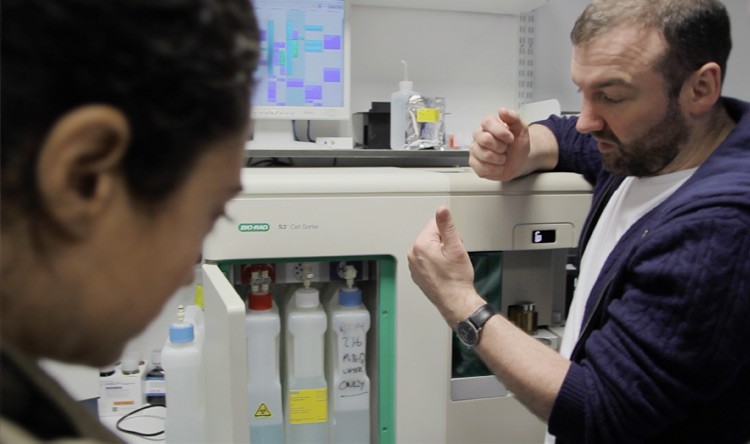 Andy Riddell trains a scientist in his facility to use the S3e Cell Sorter.

Sorting Around the Clock

This has fundamentally changed how scientists use his facility. “Sometimes you need to sort at two or three o’clock in the morning or you have a set time point at four o’clock,” explains Riddell. “And you really don’t want to have me coming in at that time of the night,” he jokes. Although he would at times accommodate late night sorts, most experiments had to be timed around his opening hours.

With the S3e Sorter, scientists now schedule sorts around the clock by simply booking time using an online scheduling system. “Having a tool in the lab that is easy to access and available 24/7 means that they can run their experiments without trying to time them with the opening hours of the facility,” says Riddell. In addition to increasing the flexibility users have in experimental design, the extended hours have also made sorting more affordable.

For Riddell all of those midnight sorts translate to peace of mind. “By extending my day, the S3 Sorter allows me to not only reduce the price for the scientist but it also allows me to keep functioning as a lab without worrying about running out of money.”

With a significant fraction of the work transitioned to self-sorting, Riddell now has time to focus on developing the new capabilities asked of his facility. While users sort one and two colors on an S3e Sorter that takes up not even half of a standard lab bench, Riddell works next door on a customized cell sorter that takes up an entire room. A pool table–sized optical bench holds the dozens of precisely arranged lenses, filters, and mirrors that make up the excitation light path of the sorter. This open setup lets Riddell adjust the sorter’s features to accommodate different sorting needs. One of the most common requests: increase sensitivity and resolution so that cells can be sorted based on smaller differences in expression level.

Cell sorters sort based on information that is collected from individual cells in the approximately 2 μs it takes them to pass through the interrogation point (Figure 1). This is a miniscule amount of time, Riddell points out, to try and collect information from a single cell as it is hurtling through the sorter at 20–30 meters per second.

For most experiments, cells are sorted based on differences in expression of specific markers by tagging these proteins with fluorophores such as GFP. At the interrogation point, fluorophores are excited using a light source, usually a laser, and the emitted fluorescence intensity is measured. Cells can then be sorted based on the presence, absence, or relative intensity of fluorescence emission.

Often expression levels are significantly different, making cells of interest easy to identify. More complicated experiments, however, require the ability to distinguish cell populations based on miniscule differences in expression. To accommodate these high resolution sorts, Riddell has modified his cell sorter to do two things: excite each fluorophore at its maximum excitation wavelength and excite fluorophores more than once.

Fig. 1. Cell sorting. Cells exit the nozzle tip in single file, pass through the interrogation point, and are sorted based on user-defined criteria. 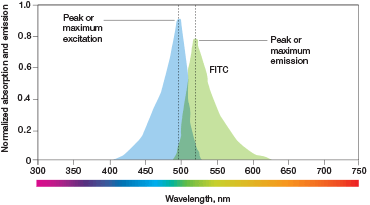 Every fluorophore has an excitation maximum, a wavelength at which it is excited most efficiently (Figure 2). To get the most signal out of a given fluorophore, you want to use an excitation wavelength that matches this wavelength. This, Riddell explains, is not possible with most cell sorters because they use lasers that emit light of only very specific wavelengths. This means that for the majority of fluorophores, we compromise.

For most experiments this compromise is of no concern, but when you are trying to tease apart tiny differences in expression, exciting fluorophores as efficiently as possible becomes crucial. To accommodate high-resolution sorts Riddell uses a tunable titanium-sapphire (Ti-sapphire) laser that can emit any wavelength between 700 nm and 1,080 nm. This alone does not get him any closer to matching a fluorophores’s excitation wavelength, but by carefully modifying the excitation light path, Riddell can cut the laser’s wavelength in half. If he wants to excite CFP, instead of compromising and exciting at 405 nm, he tunes his laser to 870 nm and generates the optimal excitation wavelength of 435 nm. This not only means that he can excite fluorophores more efficiently, but also that he can use fluorophores that others can’t. 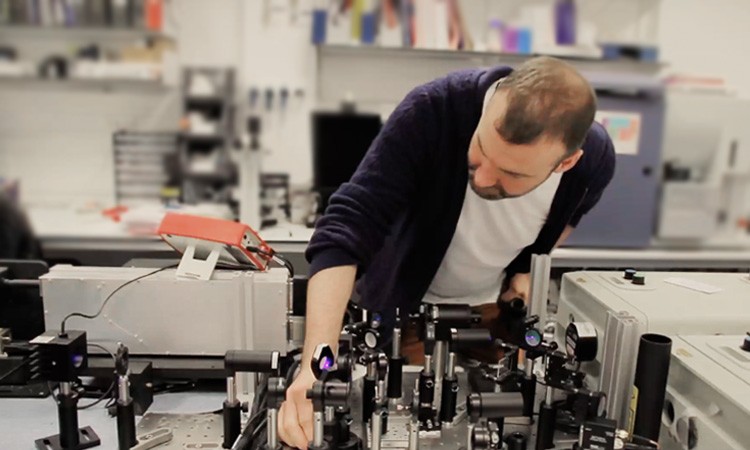 Riddell adjusts the light path of his customized cell sorter.

The second way Riddell increases the signal he obtains from limited numbers of fluorophores is by exciting each fluorophore more than once. “The idea is simple,” he says. “You have a cell and it goes through the laser beam. You hit it with a photon and an electron in the fluorophore goes up [to the excited state], hangs about, and comes back down. This is the lifetime of the dye.” As the electron returns to what is called the ground state, energy is released as a photon of fluorescence. “You want another [excitation] photon straight in behind that to push the electron back up again,” explains Riddell, “so that the fluorophore is constantly getting recycled as it traverses through the laser beam.” To accomplish this he uses a set of equations he has developed that allow him to adjust the intensity of his laser to maximize excitation of each fluorophore based on two known features of a dye, its fluorescence lifetime and absorption coefficient.

By adjusting the power and wavelength of his Ti-sapphire laser for each experiment, Riddell is able to significantly increase the resolution of his system. “On one system you may only see five peaks [or cell populations]” Riddell explains. “On my system you can see many, many more” because the signal per fluorophore is much higher.

Since he has had the S3e Cell Sorter, Riddell has had more opportunities to address these complex flow cytometry questions, allowing him to expand the services he can offer not only through extended operating hours for simple sorts but also through the ability to accommodate ever more complicated ones. But, he says, there is an unexpected side effect of bringing the S3e Sorter to his lab. The sort-or-innovate dilemma he used to face on a daily basis has now been replaced with a new problem: “The more people move to the S3e the more people come the other way [to his customized cell sorter], because the capabilities are there. But these are good problems to have,” says Riddell. “Your lab use is always good if it’s popular.”

Western Blot Detection without Interfering IgGs: A Mere Fantasy or a Real Possibility?