Too Many Questions, Too Little Sample: Developing a Real-Time PCR Workflow for Monitoring Gene Expression in Limited Samples

Most scientists have more questions to answer than time to answer them. Mark Kibschull of the Lunenfeld-Tanenbaum Research Institute in Toronto has an additional hurdle: he has too many questions and not enough sample.

Kibschull is a research specialist in the Lye lab, a laboratory that investigates the mechanisms that underlie pregnancy complications such as preeclampsia and preterm birth. To better understand how human embryonic stem cells (hESCs) develop into the more than 200 specialized cell types that make up the human body, Kibschull and his colleagues need to optimize hESC culture conditions and identify the biochemical cues that induce differentiation.

To assess the effects of culture condition changes and the addition of different biochemical cues, Kibschull uses real-time PCR and looks for the hESC gene expression patterns that are characteristic of pluripotent stem cells and those that are the hallmarks of differentiation. In theory this is a straightforward undertaking: harvest cells, isolate mRNA, and perform standard real-time PCR analysis. In practice it has proven to be an almost insurmountable challenge. “When you work with stem cells,” he explains “you often have only a tiny amount of material that you would like to analyze for several markers via qPCR. This was not possible with standard column-based RNA purification methods.”

Traditionally, human embryonic stem cell lines are grown on feeder cells, such as mouse embryonic fibroblasts, and in media that includes materials derived from animals. This poses a problem for stem cell research because the media are undefined, which allows the introduction of unknown factors that may affect the outcome of experiments.

Use of animal-derived media components, or so-called xenobiotic substances, is also problematic because it prevents potential therapeutic uses of stem cells, since pathogens could be transferred to human recipients, explains Kibschull. “There was an agreement [in the stem cell community] that xeno-free conditions have to be established that minimize the transfer of any foreign substances to humans. So, step-by-step, culture conditions had to be changed. For example FBS and murine feeder cells had to be removed, and we cannot use growth factors derived from animals.” 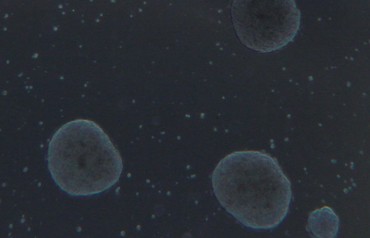 To assess the ability of different culture conditions to support pluripotency and to identify factors that commit stem cells to particular fates, Kibschull transfers cultured stem cells into the wells of specialized culture plates, which force the cells to aggregate into spherical structures called embryoid bodies (EBs) (Figure 1). Assembly into these 3-D structures induces differentiation into the three primary germ cell lineages: the ectoderm, which forms the cells of the nervous system, the endoderm, which forms epithelial cells of organs such as the lung, gut, and pancreas, and the mesoderm, from which muscle and blood cells are derived. EBs are then cultured in six-well plates to obtain enough material to look for the gene expression patterns that are characteristic of these three cell types. The ability of different growth factors to commit stem cells to different lineages can be evaluated by adding them to EB cultures and assessing the resulting changes in gene expression patterns over time.

What should have been a simple real-time PCR experiment was, in practice, often a frustrating undertaking. “Some of our culture conditions are stressful to the embryoid bodies, so at the end of a 3 week culture period we end up with 10 or 20 embryoid bodies, which is a problem because when we use standard column-based RNA purification methods, we need at least 30 to 50,” Kibschull says.

“iPSC derivation is a very tedious process, and most iPS cell lines are abnormal” explains Kibschull. “You never know what you’ve got until you do a full set of analyses, and it takes weeks until you have enough material.” Not only is this a time-consuming process, it is also a large financial commitment as the required growth factors and the final assays, such as microarray analysis, are prohibitively expensive. What Kibschull needed was a quality control protocol that would allow him to compare the gene expression profiles of tiny iPSC colony biopsies with those of established hESC lines. Such a protocol would allow him to identify and discard incompletely reprogrammed iPSC colonies early in the derivation process, saving not only time but also culturing costs.

Kibschull found himself at an impasse where many of the questions he wanted to ask either could not be answered for lack of sufficient sample or could only be answered with a prohibitively large investment of time and money. With column-based purification methods, up to 25% of his experiments had to be repeated because he did not have enough starting material, and iPSC colonies had to be propagated for weeks before they could be analyzed. Traditional protocols also restricted the number of markers Kibschull could analyze because cDNA amounts were limited.

The answer to Kibschull’s problem came in the form of a series of new Bio-Rad reagents designed specifically for gene expression profiling of limited samples. “Bio-Rad helped us develop a novel workflow (Figure 2) that allows us to analyze hundreds of different cDNA targets from as few as 100 cells [a fraction of a single EB or iPSC colony] at varying time points during differentiation or very early during iPSC reprogramming.”

This protocol allows Kibschull to bypass column-based RNA purification by generating a DNA-free total RNA lysate using Bio-Rad’s SingleShot™ Lysis Buffer. “You collect tissue and drop it into the lysis buffer, and the rest is done in a PCR machine,” Kibschull says. Because this new workflow does not include column binding, washing, and elution steps where sample can be lost, Kibschull’s experimental failure rate has decreased drastically. “It never failed in our hands. Whatever we lysed we could always analyze in the end,” he says.

Fig. 2. A new real-time PCR workflow allows Mark Kibschull to analyze the expression of hundreds of genes from as little as 100 cells.

Although the SingleShot Lysis Buffer allowed Kibschull to bypass RNA purification, he still did not have enough cDNA to profile all of the genes required to draw meaningful conclusions about the fate of his stem cell lines. To address this problem, he now uses Bio-Rad’s preamplification supermix and primers to enrich 100 cDNAs of interest 1,000-fold. Kibschull explains that the concept of preamplification has been around for some time, but he never thought it could work at such a scale. “That 200 primers in one preamp reaction lead to an unbiased amplification — I never thought that could happen,” he says. “We used the standard protocol and it worked without optimization.”

Eliminating the need for optimization is also a benefit of Bio-Rad’s PrimePCR™ Human Embryonic Stem Cell Line Panel, which Kibschull now uses to track the expression patterns of the 100 most commonly assayed pluripotency and germ layer markers. “Because these primers are validated, we do not need to check their efficiencies and specificity, which for 100 targets would mean running many qPCR plates for primer testing.” The resources that used to be spent designing and optimizing primers are now spent collecting data. “You get wonderful plots,” he explains, “that indicate culture conditions A, B, and C support the pluripotent stem cell state.”

More information from even smaller samples

This new workflow has far outperformed its intended purpose, to allow profiling of gene expression in a single EB or iPSC colony. Kibschull is now able to test more conditions and target more genes with a fraction of the starting material required for his original protocols.

Instead of using 30–50 embryoid bodies to analyze 20 markers, he can now monitor the expression of 100 genes in a single EB. This allows him to more thoroughly characterize the response of his stem cell lines to changes in culture conditions. “The more markers you analyze, the more precisely you can tell what specific cell types are present in your cultures,” he explains.

Kibschull is also able to downscale his culture format, which allows him to reduce cost and, more importantly, screen more conditions for his stem cells. He is now able to perform detailed time-course experiments that tell him how his stem cells are responding to different culture conditions. “We can go to a 96-well format [instead of a 6-well format] so we can test more conditions, more combinations of factors, and more accurate titrations of our factors,” he says. This provides him with a previously unattainable wealth of information. “The more information you get, the better your model is to optimize culture conditions,” he explains.

These benefits have also extended to Kibschull’s efforts to improve culture conditions for iPSC derivation. He is now able to screen colonies at very early time points. “I can phenotype iPSC colonies at a very, very early stage — when they first appear — and say ‘no, I do not need to follow these colonies, I can discard them.’ This results in an enormous reduction of labor and cost.” 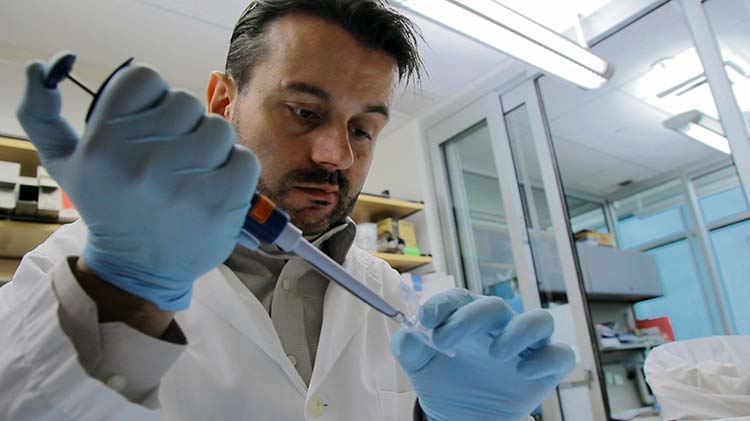 To identify factors that maintain stem cell pluripotency and those that induce differentiation, Mark Kibschull partnered with Bio-Rad to develop a workflow that allows gene expression analysis of hundreds of genes using a fraction of an embryoid body or iPSC colony.

Other members of the Lye lab have taken note of this new protocol and are working to adapt it for their systems. One of Kibschull’s colleagues profiles RNA contents of exosomes secreted by the placenta. These vesicles have such tiny amounts of RNA that their characterization requires enormous culture formats. The hope is that Kibschull’s workflow will facilitate exosome research by allowing a drastic reduction in culture size. The Lye lab also hopes that this protocol will solve a common problem its researchers face in their work with human biopsies: sample sizes so small they often limit the questions that can be addressed.

But Kibschull thinks that this workflow has applications far beyond those of the Lye lab. “This will be of benefit for all scientists that work with limited, precious samples,” he says. “They all now have the chance to generate gene expression data that they could not generate with existing methods.”

7 Tips for Choosing the Right Antibody for Western Blotting