The difference is that it works.
— Traci Lyons, Assistant Professor

When a person is diagnosed with cancer an important distinction is made — has the cancer metastasized or not? The answer to this question is of particular importance in breast cancer. Unlike cancers of vital organs such as the liver, brain, or lung, in most cases breast cancer can be completely removed. “Women do not succumb to breast cancer,” explains Traci Lyons, an Assistant Professor at the University of Colorado Anschutz Medical Campus. “They succumb to metastasis.” It is when breast cancer cells establish secondary tumors in organs such as the liver, brain, or lung, or in bone, that the disease kills.

Lyons and others have shown that a protein called cyclooxygenase-2 (COX-2) is important for the transition of tumors from the in situ, noninvasive phase to the invasive phase that ultimately leads to metastasis. They seek to understand exactly how COX-2 causes tumor cells to become more metastatic in order to propose COX-2 targeted interventions for breast cancer patients

Metastasis is a complex process that results in the formation of secondary tumors far from the primary one. To form secondary tumors, cancerous cells invade the surrounding tissue, intravasate blood or lymph vessels, travel through the body in the blood or lymph, arrest in a distant organ, extravasate, and then reinitiate proliferation at this distant metastatic site.

Lyons has shown that a specific pro-inflammatory protein may give tumor cells all of these abilities. “What we observed is that when tumor cells upregulate cyclooxygenase-2, or COX-2, they become more motile, they become more invasive, they induce lymphangiogenesis, which is the expansion of the lymphatic vasculature in the tumor microenvironment, and they tend to metastasize to the lymph node more readily.” COX-2 was not only making tumor cells more metastatic, COX-2 expression was changing healthy cells around the tumor, causing them to behave in a way that made it easier for the tumor cells to escape the tumor and travel to distant sites in the body.

These and complementary results from other laboratories were exciting findings because they carried the promise of preventing breast cancer metastasis. “If we could identify the mechanisms by which COX-2 is promoting invasion and block them with potential inhibitors in the clinic, then we could stop tumor cells from invading and perhaps prevent metastases in breast cancer patients,” says Lyons.

The first step toward understanding how COX-2 promotes metastasis was to determine what happens in vivo in its absence. Are tumor cells less invasive, as predicted? Or are they just as capable of inducing lymphangiogenesis and metastasis? Which genes change expression and which pathways are turned on or off when COX-2 is knocked down? And are some of those genes potentially more promising targets for breast cancer therapy?

To answer these questions Lyons and her students obtained COX-2 knockdown cells from a collaborator, but before using them in their in vivo mouse model they needed to confirm that the cells indeed had lower levels of COX-2 expression. Using a COX-2 antibody they were able to show that COX-2 protein levels were lower, suggesting successful knockdown. Lyons, however, was worried that their protein analysis was misleading; COX-2 shares significant similarity at the protein level with COX-1, a protein not linked to breast cancer metastasis. Lyons was concerned that their COX-2 antibody was also detecting COX-1. 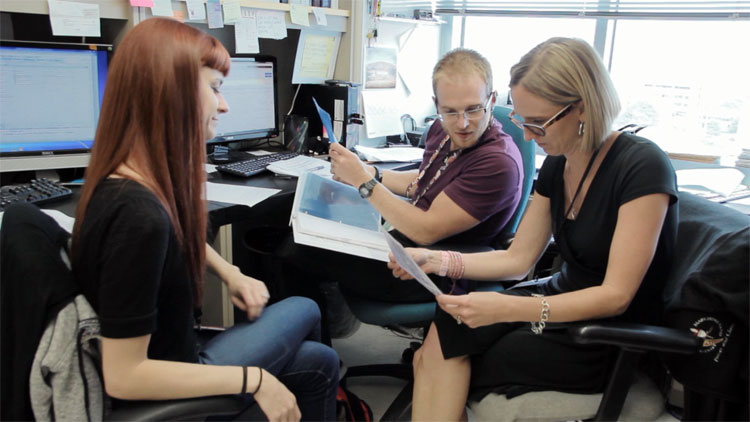 Because these two proteins are not similar at the gene level the solution seemed straightforward — COX-2 knockdown had to be confirmed at the mRNA level using real-time PCR. But this is where Lyons and her students encountered an unexpected and formidable hurdle. “We tried multiple commercially available primer sets as well as self-designed primers, but we were unable to successfully amplify COX-2 in the wild-type or in the knockdown cells,” says Lyons. Without confirming knockdown, their results would be less convincing and understanding how COX-2 promotes metastasis would be much more difficult.

Validated gene expression assays that live up to their promise

Progress was slow until Lyons ordered the Bio-Rad PrimePCR gene expression assay for COX-2 (gene name PTGS2). PrimePCR Assays differ from other commercially available assays or self-designed primers because they do not rely solely on a design algorithm to ensure that they work. Instead, all PrimePCR Assays for the human genome are bench-tested and each primer set’s PCR product has been confirmed using next-generation sequencing. To Lyons the difference was simple: “The difference is that it works,” she says. 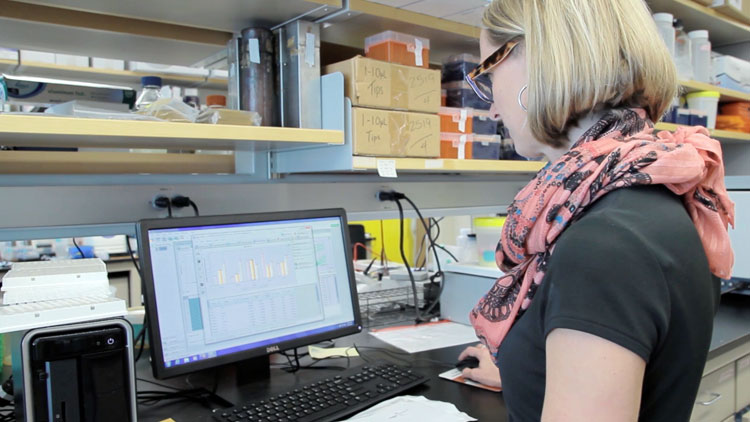 In addition to using the SYBR® Green Assay for COX-2/PTGS2, Lyons and her students used the PrimePCR Reference Gene Plate to eliminate reference genes that changed expression in their different samples. “We observed that β-actin expression, which we were using for most of our normalization, was actually changed when you knocked down COX-2,” says Lyons. Using the reference gene plate, her students were able to identify two new reference genes that did not change with COX-2, giving them additional confidence in their results.

Characterizing the role of COX-2 in metastasis

Having verified COX-2 knockdown, Lyons and her students were able to confirm that COX-2 knockdown was indeed a cause of the decreased motility, invasion, and promotion of metastasis that they observed in the knockdown cells . Moving forward, Lyons and her students are characterizing molecules downstream of COX-2 to determine how COX-2 promotes invasion and metastasis. Using PrimePCR Assays, they are working to identify and characterize genes whose expression changes with COX-2, hoping to determine how these genes function in concert with COX-2 to drive metastasis.

In a second line of research, Lyons and her students hypothesize that the tumor cell secretome must include the factors that transform the tumor microenvironment into one that supports metastasis. To identify these molecules, tumors are removed from mice and grown on tiny sponges suspended in a culture dish. Secreted molecules are collected in the surrounding media and identified by mass spectrometry. Using this assay, Lyons and her students can compare the secretome of wild-type tumor cells to that of the less invasive COX-2 knockdown cells. Then, to determine whether increased secretion is related to active transcription, candidate pro-metastatic genes are validated at the mRNA level using real-time PCR.

Lyons and her students are also turning their attention away from the tumor cells and toward the cells that make up the lymphatic endothelium. To understand how COX-2 increases lymphatic vessel density, they want to identify genes in lymphatic endothelial cells whose expression changes in response to COX-2 expressing tumor cells. 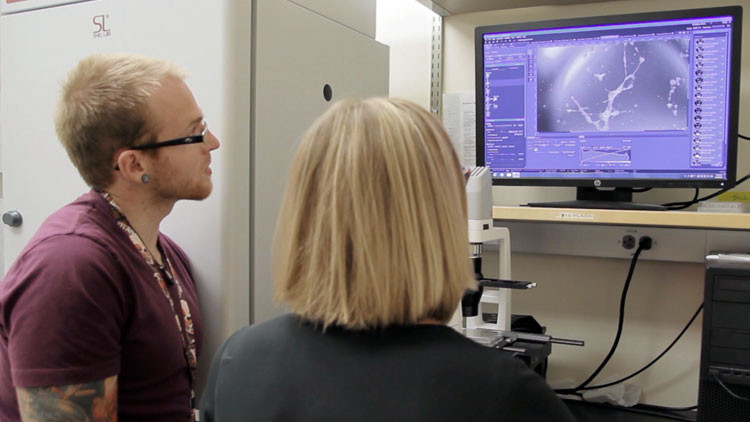 Lyons and lab manager Alan Elder evaluate the results of a lymphangiogensis assay that allows them to identify factors that promote lymphatic vessel growth.

In the past, asking any one of these questions would have been challenging. For each gene of interest, Lyons explains, they would have had to design and validate multiple primer sets. “With PrimePCR you don’t have to do any of that,” she says. “You just order the primers, check to see that they work, which they do, perform the assay, and move on to the next target of interest.” Rather than focusing on one target at a time, Lyons and her students are now looking to do more high-throughput experiments. “We envision using PrimePCR Assays either for individual genes or for larger custom designed plates to validate different transcripts in the same sample and in a more high-throughput manner than we were able to in the past.”

This line of questioning has already proven successful. Using PrimePCR Assays, Lyons and her students identified a novel promoter of metastasis that functions downstream of COX-2. When they knock down the gene that encodes for this protein, tumors transplanted into mice are less likely to progress from in situ or stage zero breast cancer, which is noninvasive and primarily nonlethal. “We are really excited about our result,” says Lyons. “It suggests that targeting COX-2, or this molecule that may be downstream of COX-2, could keep a breast cancer in a noninvasive state.

“We are now able to compare knocking down COX-2 to knocking down other molecules that we think might be important for invasion in order to determine which are the most important.” This, Lyons is hopeful, will one day lead to even more promising targets or to being able to recommend combination therapies that prove more effective than targeting just a single mediator of breast cancer metastasis.