We developed a model system for screening optimal protein purification conditions on a mixed-mode cation exchange resin using a statistical software–generated design of experiment (DOE) model with ChromLab Software’s Multivariable Scouting (MVS) function on the NGC Chromatography System. We evaluated combinations of buffers with varying pH and conductivity to identify optimal binding and elution conditions. An automated tandem and multivariable scouting method was created to identify ideal IgG binding and elution conditions that included different Bio-Rad columns for capture, buffer exchange, and screening interaction modes. With a fully automated screening process, identification of optimal conditions was reduced from the standard five days to less than 18 hours.

Identifying optimal purification conditions can be a time consuming process that requires the evaluation of multiple parameters such as sample, resin, buffer system, pH, salt concentration, and flow rates. Screening one parameter at a time may be suitable in some cases, but varying each condition separately may not capture the interaction effects seen when varying more than one parameter at a time, especially when using mixed-mode columns.

In this study we developed a fully automated way to screen multiple variables combined with tandem purification and the ability to identify ideal purification conditions based on evaluation of the chromatogram. We confirmed the varying levels of purity and recovery by running the purified IgG fractions on a gel.

IgG was first captured using a Bio‑Scale Mini UNOsphere SUPrA Cartridge followed in tandem by a Bio‑Scale Mini Bio‑Gel P-6 Desalting Cartridge. An automated tandem and multivariable scouting method was then generated to screen ideal IgG binding and elution conditions over the Foresight Nuvia cPrime Column. The ligand on this media has three major functionalities: a weak carboxylic acid end group, an aromatic hydrophobic ring, and an amide bond serving as a potential hydrogen bond donor/acceptor. Using DOE, we were able to reduce the evaluation of nine parameters from 81 combinations down to 21. A method was easily created by pasting the different conditions into ChromLab Software’s MVS tool. Tandem purification saved time and sample by eliminating the need to collect a fraction and re-inject it into the system for each condition tested before running it over the mixed-mode column.

With the DOE model, Multivariable Scouting tool, and tandem purification, we were able to test the effects of buffer pH and conductivity on IgG binding and recovery in significantly less time than testing conditions individually and manually.

The samples were run on an NGC Quest Plus Chromatography System (Bio-Rad) with a sample pump, two column switching valves (CSVs), two buffer inlets, and a pH valve.

Peak integration was performed using the ChromLab 6.0 Software evaluation tool. Auto-integration was performed with the baseline in “By Offset” mode and the peak selection parameters set to slope = 10 and sensitivity = medium. Manual refinements to the integration were made in situations where peaks showed extensive tailing. In these situations, the elution peak was cut after 2 ml were collected. The remainder of the peak area was included as part of the strip peak area.

Integration area (A) data were copied into an Excel spreadsheet and %Bound and %Recovery were calculated as follows:

The calculated %Bound and %Recovery values were copied into the DOE model spreadsheet and analyzed according to the previously determined model.

The use of DOE to home in on key parameters in combination with ChromLab Software’s tandem and multivariable scouting features minimized the evaluation of nine different parameters from 81 different combinations to 21 and reduced the time it took to run the experiments from five days to less than 18 hours. Optimal conditions were evaluated in a fully automated fashion with a two-column tandem purification using a P-6 Desalting Column to buffer exchange the IgG into the buffer to be screened, followed by a Nuvia cPrime Cation Exchange Mixed-Mode Column for purification.

The 21 different pH and salt molarity conditions for MES binding and tricine elution buffers are listed in Table 1.

The contour plots in Figure 1 indicate better binding of IgG at lower pH independent of the salt concentration. This indicates that the Nuvia cPrime Resin could be used for an intermediate or polish step as it binds the protein in the presence of NaCl. 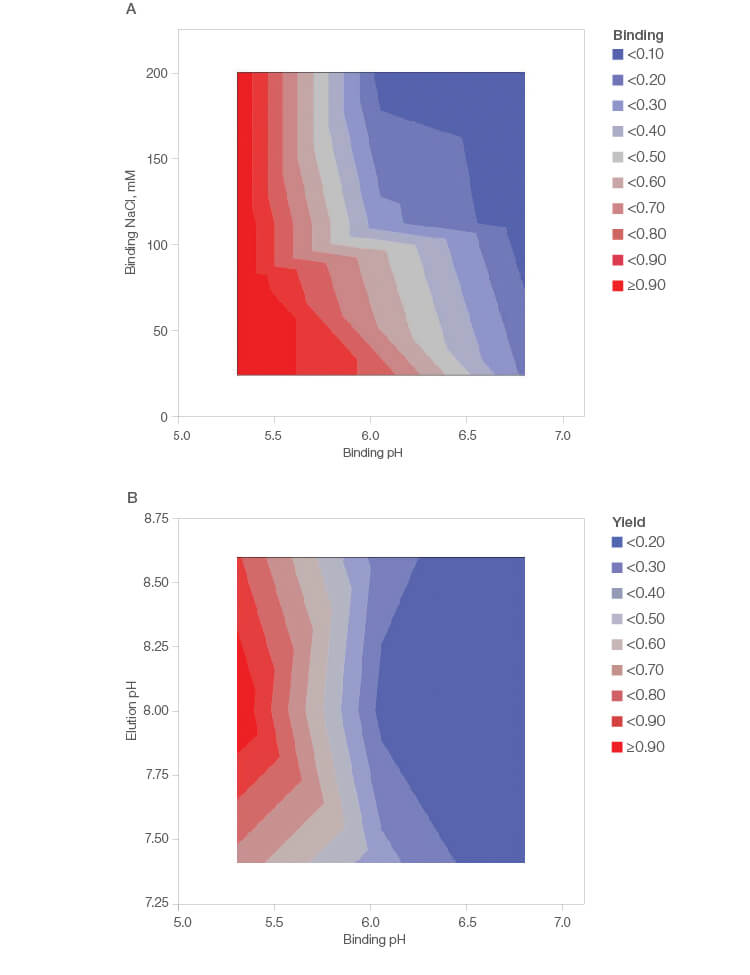 Fig. 1. JMP Statistical Software contour plots showing binding (A) and yield (B) based on pH and salt concentration. 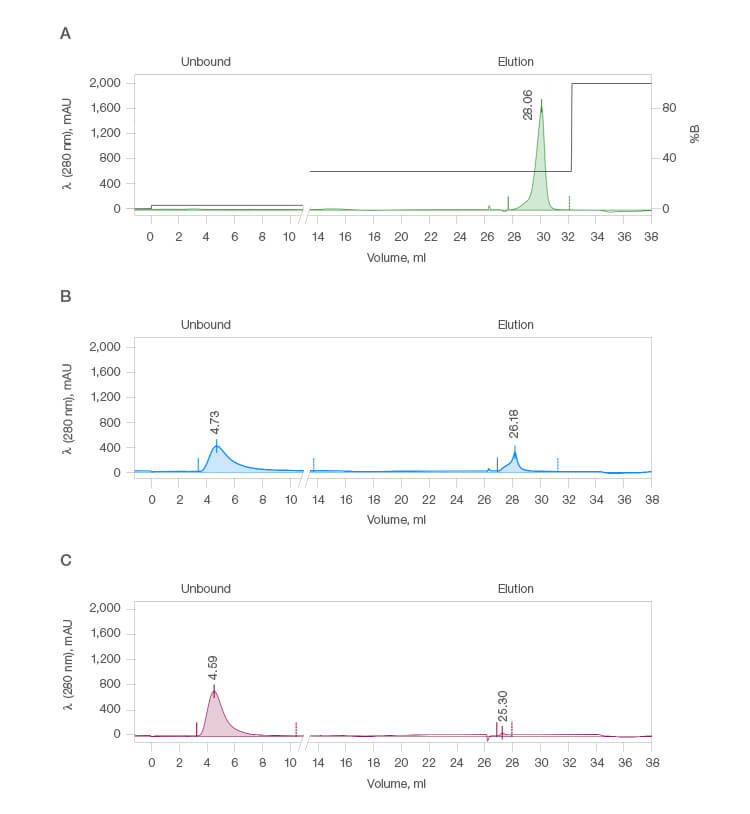 The recovery values of purified IgG under different conditions and represented in chromatograms were confirmed by running the IgG, reduced IgG, and column strip fractions on a gel (Figure 3). 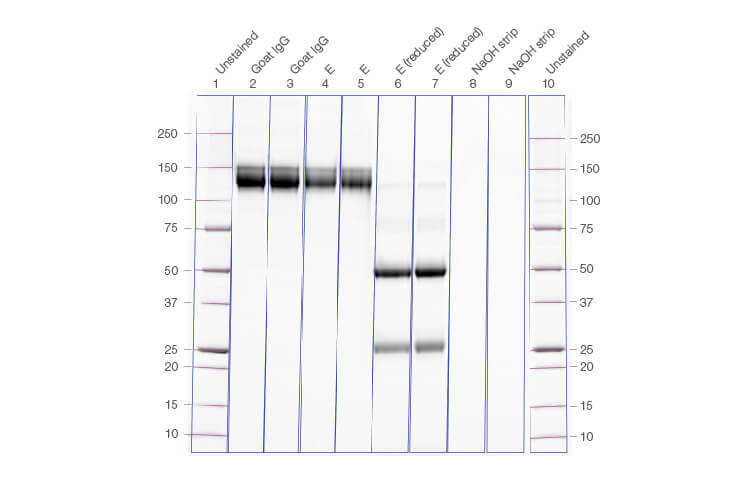 In this study, we demonstrated that using DOE in JMP Software with the Multivariable Scouting tool in ChromLab 6.0 Software and setting up a tandem purification on the NGC System can greatly cut down the time it takes to screen optimal binding and elution conditions for IgG on the Nuvia cPrime Cation Exchange Mixed-Mode Column. Statistical software also aided in reducing the workload by providing 21 combinations for both binding and elution buffers versus the 81 combinations that would have been required without the two-parameter, two-level fractional factorial DOE approach.

Time was also saved during the analysis and assessment of optimal conditions by evaluating chromatograms while screening because gels did not need to be run for all the conditions. However, using Criterion TGX Stain-Free Gels when needed helped save additional time since the gels do not need to be stained and destained before imaging.

These tools and methods can be used as a model system to streamline screening for optimal purification conditions of various proteins in any area of research, discovery, or drug development.

Bio-Rad is a trademark of Bio-Rad Laboratories, Inc. in certain jurisdictions. TGX Stain-Free Precast Gels are covered by U.S. Patent Numbers 7,569,130 and 8,007,646. All trademarks used herein are the property of their respective owner.

Develop an Immunotherapy in Augmented Reality