“Nobody thinks about car engines anymore,” says Bob Iovanni, lead engineer for Bio-Rad’s NGC chromatography system. “That’s because car engines don’t break. If you’re fixing a modern car now, you look under the hood and all the parts and pieces there are so reliable and so commonplace and so commoditized, you don’t even worry about them. You focus much more on how they’re tied together.”

Wait a second! Why is Iovanni talking about cars? Isn’t this an article about chromatography?

Yes, this is still a chromatography article. However, it turns out that Bio-Rad’s new NGC chromatography system has a lot in common with the design of a modern automobile or airplane. Just like these designs, Iovanni explains, the NGC system follows a “distributed processor model.” Since Bio-Rad wasn’t trying to reinvent the basic devices involved in chromatography — pumps, valves, detectors, and so on — the main challenge in designing an entirely new chromatography system amounted to putting these devices together in a way that worked better for chromatography users. “It was essentially a systems integration effort,” Iovanni says. The new level of reliability this effort produced is the subject of this fifth and final installment in the Chromatography Chronicles.

Reliability is an important consideration in many areas of engineering, but it has a special meaning for chromatographers, who routinely face frustrating system breakdowns that can leave their labs paralyzed for days or weeks at a time. A few of these researchers, seeking an outlet for their many complaints, have even taken to comedy clubs to vent, as this video shows:

Facing adversity with humor, some chromatographers are drawing on the healing power of laughter to deal with the frustrations of chromatography systems that just won’t work.

“My nightmare scenario when we were designing the NGC system wasn’t that a pump was going to break,” says Iovanni. “It was that we would miss something in the basic architecture and we’d start dropping data packets — we’d start getting junk on the display, or bad chromatograms — and we wouldn’t be able to figure out what was happening. So we put a huge amount of time and effort into that integration side of the project: How are the processors controlling all the modules going to communicate? What does the flow of information look like?”

Overall system reliability is one result of this focus; another is the NGC chromatography system’s ability to alert users when individual parts like pumps, which have a defined lifespan, need replacing. This communication, along with the system’s modular design, means that no one component will cause a system-wide shutdown. “If you break a pump, you don’t want to be tearing apart the entire system trying to figure out what went wrong,” Iovanni says. “You want something simple. Whatever the part is, our customers can get a new one delivered, take the old one out, plug the new one in, and it tells the system ‘here I am!’ and the software recognizes it. Simple as that.”

Iovanni finds this repair and replacement process, which generally provides a replacement module to users in about 24 hours, unique among available chromatography systems. “With [other systems],” he says, “getting service is like (dealing with) the old television repairman: ‘I can see you in two weeks…and be sure you’ve got your checkbook ready.’ I think we have a better model than that.”

Even though Bio-Rad didn’t reinvent the pump for the NGC chromatography system, that doesn’t mean pumps — or detectors, valves, buffer blenders, and other individual devices — escaped notice during the development process. Engineers “beat to heck” these components, subjecting pumps to millions of cycles, leaving them on for weeks at a time, or putting buffer blending valves through hundreds of thousands of cycles. Along with extensive testing of software, middleware, and firmware, the entire system was subjected to simulated blackouts, brownouts, and lightning strikes, as well as temperature conditions ranging from the freeze of a cold room or deli fridge to the sweltering heat of 40° C. 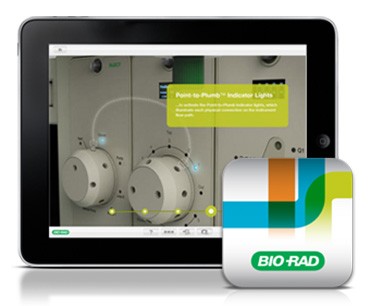 The NGC iPad app on the iTunes store offers an in-depth, interactive tour of the NGC chromatography system, with video tutorials, an augmented reality camera showing how different systems might fit in a researcher’s lab, and more.

“You don’t want it to break. That’s what reliability means,” says Iovanni. “And that’s why we did so much work up front on that basic architecture.” The result of this work is a system that can accommodate and adapt to the complexity of chromatography, where many devices have to function together, through a combination of intelligence and modularity. And the modularity means that no one part will cause one of those mystifying, maddening system breakdowns that previously bedeviled chromatographers. Returning once more to the car analogy, the new level of reliability engineered into the NGC chromatography system will get users’ separations and purifications out of the breakdown lane and back into the fast lane.

So ends the Chromatography Chronicles, but a better chromatography experience still lies ahead! Learn more about designing your own NGC chromatography system, download our award-winning app, and get up to speed with more stories and videos on the NGC system. Here’s wishing you many happy purifications!

iPad and iTunes are trademarks of Apple Inc.