“It looked like a Medusa,” said Farah Mavandadi. “I was scared of it.”

Mavandadi, a senior product manager at Bio-Rad, was not describing a monster in a nightmare or a creature seen from a diving bell, but rather a research-scale chromatography system. Sprawling over a lab bench, instead of snakes the system had bunches of electronic cables and fluidic tubing that writhed and tangled around its various components.

Despite resembling an unholy mashup between Rube Goldberg and Jason and the Argonauts, this system was highly valued by the researcher who had wrangled it together, lovingly making each complex connection and hand-coding each component into the analytical software. The reason? Flexibility. Despite its messiness, the researcher could rearrange her system to get the most efficient fluidic path, to have right kind of detector in place, or make any other tweak in order to perform the best possible separation. Between having an “easy” instrument and having one she could change as her chromatography needs required, this researcher chose to face “Medusa.”

Postdocs Janna and Tomas are having a friendly competition to see whose chromatography system is the most scalable and flexible. Watch the video to see who will win and who will have to wear the penguin hat.

Examine an NGC chromatography system head-on, and its modular design appears obvious. Sample pumps, gradient pumps, detectors, valves, and other components sit in neat rows, all facing front, stacked in two, three, or four tiers, depending on the model. As one would expect, any module can be positioned in any bay, resulting in approximately 3,000 different system configurations. Users can configure their system to their exact specs, or choose from among several preconfigured models.

Being able to change one module at a time lets the instrument grow in line with purification needs. For example, a researcher who starts out using a smaller 10 ml/min system pump for preparative applications could easily scale up her production by changing to a 100 ml pump. Or, she might shift from purifying simple proteins to smaller biomolecules, and could facilitate this by adding a multi-wavelength detector. The user can also configure and build her own chromatography system by adding the permutations and combinations that suit her own individual needs.

/2014/11/ngc-chromatography-system-module-addition-image.jpg” alt=”Picture of researcher adding a module to the NGC chromatography system” /> 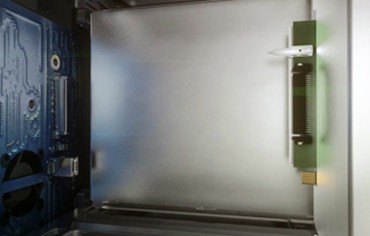 Left: Adding a module to an NGC chromatography system. Right: Modules are “plug and play,” locking into place and automatically registering on the system’s ChromLab™ software. 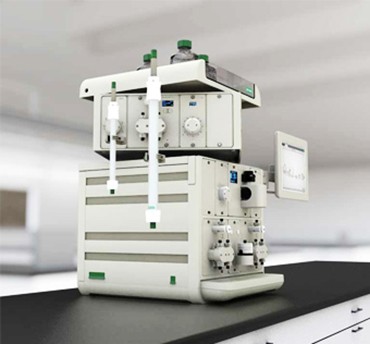 The ability to rotate the third and/or fourth tiers allows for lower hold-up volume and improved resolution. 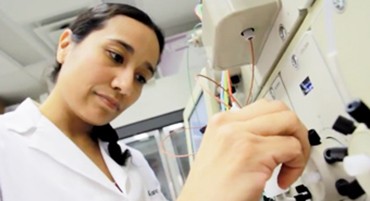 A user at the University of California, Davis, plumbs an NGC chromatography system. Moving around modules has enabled her to find the best possible flow path for her purification scheme.

Swapping modules in this way has another benefit: should a given device requires service, it’s simple to remove it, mail it to Bio-Rad, and replace it. This keeps any one part from shutting down an entire system.

Besides its most striking aspect — the uniform, evenly divided front face — the NGC chromatography system’s modularity also manifests in less obvious ways. Alongside the physical arrangement of the system, the system’s ChromLab™ software supports any change made in the modules by detecting and incorporating new or moved units into all relevant fluidic paths.

“Having the software intelligently adapt to the hardware is unique to the system, and is based on a patented technology,” said Mavandadi.

Another twist on creating a flexible yet neatly compartmental chromatography system occurs at the upper levels of the system. Entire tiers of additional modules can be added as purification/separation schemes become more advanced, or as volumes scale up; those upper tiers are already included with the NGC Discover models. These third and fourth levels also rotate — the system was designed to have a square footprint to facilitate making this turn, which can minimize hold-up volume, create more efficient flow paths, and thereby increase resolution.

The rails on the sides of the system offer additional opportunities for swapping, configuring, and adding components to get the best possible fluidic scheme for a given application. Here, strong magnets hold columns; or, when not functioning as a remote control, the touchscreen can attach to these rails by a screw-in arm.

With its many permutations, coming into play from every angle — the front, the sides, the top — the NGC chromatography system emphasizes scalability and flexibility while ensuring that researchers don’t need to wage a mythic battle to customize their system to find the right purification scheme. Adapting to the many challenges different molecules present with intelligence and ease, in the NGC chromatography system the power of “Medusa” has finally been tamed.