Take a look at one researcher’s dilemma in trying to find a chromatography system that works outside the coldroom.

Images of polar expeditions flash through many a researcher’s mind in preparing to enter the laboratory coldroom: Ernest Shackleton losing his ship, Endurance, to crushing Antarctic ice, Robert Peary suffering from malnutrition as he drove his sled dogs north, or even the plodding March of the Penguins.

In putting on as many warm layers as will fit under a lab coat to brave the coldroom, these researchers may resemble glacier trekkers or blubber-bound ice-fowl, but they aren’t trying to reach the North or South Pole. Instead, they’re pursuing a different prize: a fraction of purified protein, usually just a few precious milliliters’ worth, the product of hours and hours of work. If Shackleton lost both his ship and his mittens, and Peary nearly starved and broke his leg in two places, what sacrifices must today’s chilled chromatographers contemplate in order to perform chromatographic separations in the coldroom?

Giving these stalwart scientists a break — and a more temperate work environment — was on the mind of product manager Farah Mavandadi and the development team at Bio-Rad as they sought to build a better chromatography system. In this month’s installment of The Chromatography Chronicles, we’ll look at how they engineered the new NGC chromatography system so it could be used outside the coldroom, thereby saving chromatographers from the big chill that had been their lot.

Early models show the incorporation of functionality into the NGC chromatography system design. Getting the system to function while inside a lab’s deli fridge was a key concern.

The key to not having to use a chromatography system in a coldroom lies in having a chromatography system that’s right-sized for a lab’s deli fridge. Meeting this specification has become more and more necessary not only because of the human discomfort of working for hours inside a giant refrigerator, but also because “a lot of coldrooms are getting very crowded, so people are trying to move away from keeping their instruments in them,” noted Mavandadi. Unpleasant as they may be, coldrooms are also a precious lab resource.

In fashioning a lab-scale chromatography system that didn’t require replacement in the coldroom, the Bio-Rad engineers started at the obvious point: taking measurements inside common fridges used by labs and making sure the system prototype would fit in them. While placing one rectangular box inside another doesn’t seem like a huge challenge, once functionality entered the picture, the design considerations became more complex. For example, being able to add tiers of modules as purification needs change is a distinguishing feature of the NGC chromatography system, so engineers had to ensure that the two, three, and even four-tiered versions would fit inside typical deli fridges. This allows for system expansion without adding to the side of the instrument, leaving space in the fridge for peripherals such as fraction collectors.

The next step was to look at the ergonomics involved, since people would have to perform sophisticated purification protocols inside a fridge’s tight confines. Here human factor studies allowed for fine-tuning the system for this special setting. 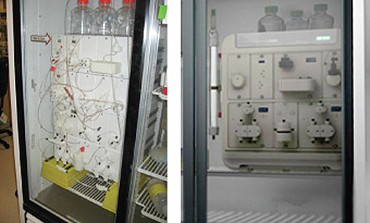 “The [human factor] studies were very interesting,” Mavandadi remembered. “We had an industrial designer checking on very detailed questions such as, ‘How would the system be placed inside a refrigerator? Where should the hold points be located so it could slide in easily? And once in, how would it be ventilated while sitting flush against the back wall of the fridge? Other considerations involved the touch screen, how should it be mounted inside and outside of the fridge in a way that would be suitable for various body types?’” While this work involved an iterative design process, “sometimes it was simply a matter of finding the tallest and the shortest person in the lab and saying, ‘here, try this and do this with it,’” Mavandadi laughed.

The NGC chromatography system frees users from the coldroom not only because it fits in a deli fridge, but also because it functions there. As the development process shows, this compatibility wasn’t just an afterthought; its considerations permeated the system’s design. They reveal themselves in the final product through features such as the entirely front-facing system; a touch screen that is ambidextrous and detachable for the tight confines of cold boxes; third- and fourth-tier rotation, to enable better resolution through lower hold-up volume; and flexible module and column placement to minimize the flow path and increase resolution. With the NGC chromatography system, labs can better utilize their coldroom space, while long-suffering chromatographers can save their parkas, long johns, and mufflers for playing in the snow.

Guide to SPR Data Processing on the ProteOn™ XPR36 System