Ah, chromatography. It’s not something you hear about in the same sentence as “easy” or “user-friendly”… more like “teeth gnashing,” “system breakdown,” or “nervous breakdown.” Until very recently, researchers working at the analytical and preparative scales were stuck choosing between systems that offered flexible configurations but resembled Medusas with tubes and wires spilling over the bench, systems that were easier to use but were one-trick ponies as far as configuration, and researchers’ own “Frankenstein-ed” solutions.

This state of affairs was about to change, however.

It’s 2009, and Bio-Rad’s engineers, designers, and product managers have just gotten the green light to design and build a better lab-scale chromatography system. This is a from-the-ground-up, blank-slate effort, a chance to question all assumptions, bring in new ideas, and leapfrog the competition. Is it possible to create a system that addresses and eliminates the specific pain points customers describe?

The Chromatography Chronicles will answer that question. A five-part series on the development of Bio-Rad’s new NGC chromatography system, these monthly articles will describe how customer voices became a part of the design process, how the system helped users escape the cold room, how modularity and scalability became integral to its design, how the team built an intuitive interface, and how this system’s greater reliability allays fears raised by the error-prone reputation of chromatography equipment. Along the way, accompanying videos will capture the spirit and fun of this major product development challenge.

Read on to find out what problems the NGC team faced, where they innovated, and why they made the choices they did as they tried to create a better chromatography system. First, get a (slightly satirical) sense of the groundswell building for better chromatography with this month’s video:

Part 1 – The Votes Are in: Making Customer Voices Part of the NGC Design Process

What do people want from a lab-scale chromatography system?

That was the question confronting product manager Farah Mavandadi as she set out on a series of visits to chromatography users. She wanted to better understand where her customers’ frustrations with their current systems lay, and hear their ideas for what a new system should contain. That would be the first step in creating an entirely new kind of chromatography system.

These visits were only the beginning of how customer voices entered the creative process. This installment of The Chromatography Chronicles looks at how scientists and other users became a part of the NGC chromatography system’s development, influencing both the decisions made and the way the development occurred. The ultimate goal, after all, was to create a system with enough flexibility that its customers would be able to design one that worked for them, choosing and configuring the exact modules they needed at the right scale for their work. So it made sense that a chromatography system that would be designed by its customers at the end should be designed by its customers from the start. 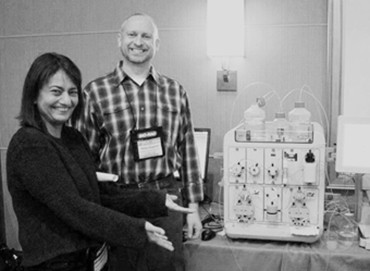 Sr. Product Manager Farah Mavandadi and Product Manager Philip Chapman pose with the NGC chromatography system shortly after the product launched. The finished product reflected the many customer voices that were made part of the design process.

In taking this first step to finding out what users wanted, Mavandadi heard from hundreds of research scientists and pharmaceutical developers regarding other systems on the market, as well as Bio-Rad’s then-current system, the BioLogic DuoFlow™. The upshot of these initial discussions was that people liked the flexibility the Bio-Rad system offered, but the device’s learning curve was steep and the software complex. Other systems offered better interfaces, but at the cost of allowing users to select components to match their changing purification needs.

“People had to buy a fixed box and that was it. They couldn’t modify it, they couldn’t add to it,” Mavandadi recounted hearing about other systems. “The goal when we started NGC was to have the neatness of those competitive systems, but keep the flexibility that people liked about the BioLogic DuoFlow. That was the design challenge.”

The way they met this challenge would have a big effect on the end result. On the hardware side the design was guided by the expandability concept rampant in the computer industry. From a software point of view this was a challenge because the software had to adapt easily to the numerous possible configurations. Mavandadi cites the team’s use of agile software development as one of the most important choices that aided this process.

Agile development methods depart from more customary design approaches. Instead of giving developers a list of desired features, then waiting several months to see what they produce, this approach works by having business leaders and development teams work collaboratively to better realize what customers desire. It incorporates constant feedback, making the development process visible to the entire team through daily or weekly interactions between all stakeholders, including customers.

Agile development proved especially well-suited to designing a system like NGC, which needed modules and software that could function together in different combinations. Since any given module arrangement could be very important to one customer but not necessarily appeal to the majority of the market, using a top-down, hierarchical design approach risked favoring some less popular workflows over others or leaving them out altogether. Traditional design methods, which try to build all features without regard for their importance to the customer, would have diluted the team’s attention across the entire requirements list. Instead, the agile methodology brought intense team focus to designing the most important workflows first, by prioritizing design iterations in an order which customers affirmed were important to them. Having something real that customers could use early also made it easier to bring user feedback into the development process.

“That we were being agile and designing in an agile way allowed us to develop interface elements and workflows and test them immediately with users,” recalled Mavandadi. “We could then say, ‘this does work, this doesn’t work, this is how we see them using a given feature.’ Then we could incorporate the customer experiences directly into the development very early in the process.
I think that was a big part of what made the NGC’s software intuitive and easy to work with.”

Chris Fraser, a molecular biologist at the University of California, Davis, was one of the users who provided extensive feedback during the NGC’s development. “To have the level of input [that we did] was surprising to me,” Fraser said. “I didn’t really expect to be able to work with all of the engineers and the software development team to make what we’d recommended come to reality. It was pretty cool.”

“Being involved in the process and the testing allowed us to incorporate some of the ideas that we thought were really important to have in a machine,” continued Fraser. “It is actually very rewarding for me and for the lab to see many of those ideas brought to fruition in this finished product.”

Getting the user involved in the design from the outset proved essential to achieving the innovation of a truly plug-and-play chromatography system. Today, customers can go online and model the system that’s right for their research needs, or pick from several different preconfigured systems. The functionality of the components involved — pumps, valves, columns, detectors, collectors — haven’t changed. However, the NGC chromatography system makes it simple to put them together in a configuration personalized to the user’s purification needs, or to switch them as needs change. That these are basically seamless processes is no accident. User experience, whether of the customers who demanded flexibility and ease of use in a system, those who contributed their ideas, or those who tested each workflow and design iteration, was literally built into the system.

Next month: Bidding a not-so-fond farewell to the cold room.