Phagocytosis and Phasing Out Disease

Consider the immune system — arguably one of the most important cellular ecosystems within your body. Composed of various biological structures and processes, healthy immune systems are tasked with detecting a plethora of invading pathogens and distinguishing them from native cells. And they do this using a destructive, relatively large, and very hungry cell, the macrophage. Much like the enormous, terrorizing pink blob of the 1958 eponymous film, “The Blob”, the macrophage engulfs its victims (a process known as phagocytosis). But, it shares another trait with the Blob — very little is known about it.

Allow me to introduce you to the second guest on the Brilliant Science podcast, Dr. Adam Hoppe, professor at South Dakota State University. He’s the director of the NSF-sponsored BioSNTR, an interschool and interdisciplinary group created to elevate the research capabilities in South Dakota. Physicist and mathematician-turned-imaging biologist, he develops imaging techniques to understand and create mathematical models of cell signaling pathways. His cell of choice is the macrophage. 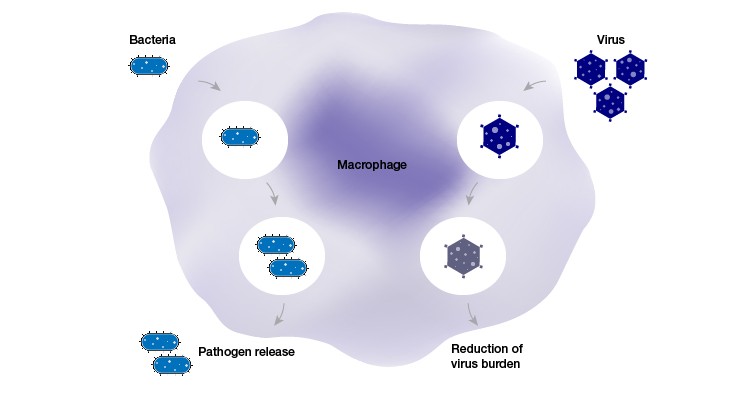 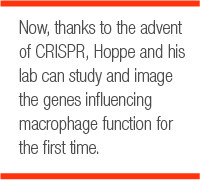 Macrophages, in short, are important. They regulate immune system responses by consuming invasive pathogens, they’re found in nearly all tissues, and they can even be hijacked to work against their native system (for example, in tuberculosis, HIV). If they’re dysfunctional, we fall victim to severe, chronic diseases. Yet much remains unknown about their complex functions, genomics, or how genomics inform those functions. But, science is in a new golden age. Almost weekly, new headlines appear heralding the latest CRISPR achievement. Could CRISPR help us better understand phagocytosis? If phagocytosis were better understood, would dysfunction and disease be better understood, too?

In order to learn how cells do the amazing things they can do, we have to be able to figure out why. And that answer is almost always rooted in DNA. Up to now, studying macrophage genomics has been a challenge. When Hoppe first started to peer into the mechanics of the macrophage, he was relying on microscopy alone. But he explains he “didn’t have great tools for genetic manipulation and fluorescent proteins.” Now, thanks to the advent of CRISPR, Hoppe and his lab can study and image the genes influencing macrophage function for the first time.

Using CRISPR, Hoppe’s lab inserts fluorescent protein genes in-frame with the genes that code for specific cellular functions. This allows his team to “watch only the proteins that have the fluorescent proteins attached to them,” and avoid mixing and matching different expression levels when connecting genotype to phenotype. With methods they’ve developed, the team is able to look over “large swathes of the genome, creating disruptions” to get closer than ever to distilling macrophage phenotypes. 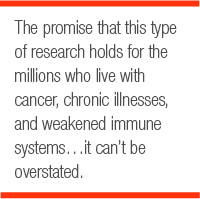 Pairing well with this work on the macrophage, Adam also collaborates with SAB Therapeutics to strategize and develop new antibodies for targeting pathogens such as viruses or cancer cells. Because macrophages are key effector cells that induce phagocytosis upon recognizing antibody-marked targets, they can be guided by novel antibodies to new targets. Given a therapeutic antibody designed to mark specific cancer cells, native immune systems could be trained to fight cancer themselves.

The promise that this type of research holds for the millions who live with cancer, chronic illnesses, and weakened immune systems…it can’t be overstated. It’s the solution many doctors and patients have waited years for. Now, it seems it may be right around the corner. Adam and his team are understandably hopeful and excited for the years ahead for their projects.

And at the precipice of what may prove to be incredible discoveries, what would Adam say to a younger self? He’s the kind of researcher who tries to see his projects all the way through and be sure of an answer, but he would caution to “try to be a little less of a perfectionist…and maybe publish a little more often.” Sound advice for academia and industry folk, alike.

Podcast: CRISPR Gene Editing and Its Effect on Research and Development

Speed Time to Results by Incorporating Flow Cytometry into the CRISPR

The Potential for CRISPR Gene Editing in HIV

The Benefits of Flow Cytometry in Immuno-Oncology Research