Picture the fun-filled phenomenon of leaping into a ball pit — reds, blues, and yellows bubbling over in a cheerful, explosive, heterogeneous mass. If you wanted to know exactly how many red versus yellow balls there were, would your estimate be based on the entire pit, as a whole? Maybe you would count the balls in one section of the ball pit and extrapolate the total. Or would you aim for accuracy and count them one by one?

From the perspective of a cellular biologist, this proverbial ball pit is a nifty metaphor for the plethora of cell types found in biological samples. Plenty of standard, bulk, and estimation analyses are done in cellular biology with success. But the challenge of examining the ball pit with high accuracy is the kind of situation single-cell analyses (i.e., counting one-at-a-time) are designed to solve. 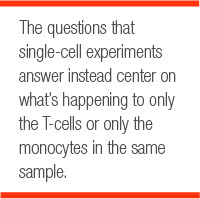 Dr. Kelly Kaihara is a market development scientist at Bio-Rad and our in-house single-cell analysis expert. She joined Dr. Laura Moriarty on the Brilliant Science podcast (linked at the end) to talk about the array of benefits of single-cell analyses as well as her own perspectives. Kaihara first became interested in exploring single-cell techniques after her work in the lab seemed incomplete without cellular-level scrutiny.

For example, peripheral blood mononuclear cells (PBMC) are a mixture of immune cells (e.g., T-cells, B-cells, monocytes) prevalent in biological research. Downstream analyses like qPCR or western blotting would be carried out on the whole, heterogeneous sample — all cell types at once — just like approximating the ball colors. And, often, this is perfectly satisfactory. The questions that single-cell experiments answer instead center on what’s happening to only the T-cells or only the monocytes in the same sample.

Single-cell methods like the ones Kaihara helps develop range from DNA amplification techniques (like Bio-Rad’s Droplet Digital PCR technology) to antibody-based proteomic protocols. They can be incorporated downstream but there are also tools for upstream from an analysis workflow. As an example, fluorescence-based cell sorters (like Bio-Rad’s S3e Cell Sorter) are being engineered to rapidly sort target cells one by one, making analyses more efficient and accurate.

In a recent collaboration with researchers at Bio-Rad, a university lab wanted to understand a puzzling pluripotent stem cell situation. When growing stem cells in large quantities — perhaps for 3-D tissue models for pharmacokinetics — differentiating efficiently is crucial. In the lab, cells were developing better when cultured in 3-D rather than 2-D. Single-cell sequencing revealed that a small subset in the 2-D population shared the “efficient” characteristics of the 3-D cells. But, a lowered prevalence may have prevented those cells from growing according to those characteristics. That discovery has opened a door for future work: what are the genes in the efficient stem cells and can targets be established that get more stem cells to that more successful state?

In this new golden age of medical advancements — think CRISPR and our budding knowledge of microbiota — what future could single-cell analysis offer? For Kaihara, she dreams of a database.

“I would really love to have a database for single-cell experiments. Just like we had via the NCBI website. With these experiments, we’re getting a wealth of information and we’re finding novel markers for subpopulations of cells…that are different than the markers we’ve used from cell sorting experiments.”

Because single-cell techniques help identify new cell populations based entirely on gene expression, a catalog based on the top genes of a newly-sequenced subpopulation could identify what that subpopulation is thanks to experiments done by others. It would certainly prove a powerful way to channel the global science community toward rapid progress. 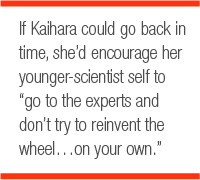 In addition to methods like single-cell sequencing and high-speed fluorescence-based sorting, many exciting technologies are emerging. Information about protein expression can now be garnered on a single-cell level. There’s also full-length RNA sequencing, transcript identification, and even SNIP identification — all at the DNA level. Personalized medicine is breaching a new horizon that is rapidly extending past CRISPR. Now, powerfully informed cell analysis could be yet another way for researchers to answer difficult questions.

And, in true Brilliant Science fashion, if Kaihara could go back in time, she’d encourage her younger-scientist self to “go to the experts and don’t try to reinvent the wheel…on your own.” Companies just like Bio-Rad are made up of intelligent, knowledgeable people who love to be helpful. For Kaihara, that helpful knowledge is, ultimately, priceless.

Bio-Rad and Droplet Digital PCR are trademarks of Bio-Rad Laboratories, Inc. in certain jurisdictions. All trademarks used herein are the property of their respective owner.