It is at once science fiction and fact — the hacking of that tiny, powerful code that determines who you are and what you look like. Over the last few years, CRISPR has remained at the forefront of the genomic conversation, holding captive the collective dream of conquering our own DNA. Surprising no one, applications for CRISPR cover an incredible range. But there’s one strikingly positive charismatic character, Dr. Chengzu Long, at New York University, who’s using CRISPR to dissect and dismantle one of the world’s more tragic diseases — muscular dystrophy. He was the first guest on our Brilliant Science podcast, hosted by Laura Moriarty. And, as he likes to say, you can call him Long for short.

Muscular dystrophy — Duchenne muscular dystrophy (DMD), to be more specific — is a well-known, severe neuromuscular degenerative disease that typically is recessively linked to the X chromosome. Often, parents don’t realize that they are carriers for DMD until after their child presents symptoms. DMD symptoms typically appear in young boys (1 in 5,000, globally) around the age of five, stunting life expectancy to about 30 years. Long cites behaviors such as struggling to stand or climb stairs as early warning signs. 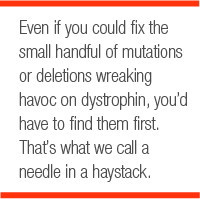 But the largest factor in muscular dystrophy being so difficult to understand (let alone cure) is that it takes only a few genetic mutations affecting the protein dystrophin, which supports muscular function, to cause the condition. But the DMD gene, which codes for dystrophin, is formed from more than 2.3 million base pairs, which makes it one of the largest known genes in humans. Even if you could fix the small handful of mutations or deletions wreaking havoc on dystrophin, you’d have to find them first. That’s what we call a needle in a haystack.

Which is where Long comes in.

As he shares with Laura, Long paved a surprisingly nonlinear path to the CRISPR research he does now. From a degree in bioengineering, Long meandered to plant-bacteria interactions based on an early interest in microbiology. Eventually, he found himself a post-doc at University of Texas Southwestern Medical Center studying the mechanisms of degenerative disease. And today, of course, he’s a professor at NYU pioneering paradigm shifts in the way genetic diseases are studied.

At the NYU Langone Health Center in New York, Long and his team recently published a study of work they’ve been doing to revert patient’s blood samples into differentiable cells. From there they can generate heart tissue that exactly matches that of their DMD patient. This provides them with an accurate 3-D tissue model they can use to investigate the specific effectiveness of gene editing therapy for any patient. Long emphatically notes the incredible utility of CRISPR, a headlining gene editing tool. His group has already shown that CRISPR can correct a single point mutation affecting dystrophin in mice models (read: 1 base pair out of 2,300,000+). It’s the type of breakthrough work that Long would like to extend to other genetic diseases in future. 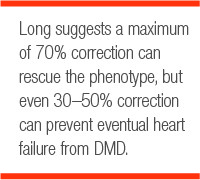 But when speaking of people who may have many, many mutations in the DMD gene, Long points out that correcting every last copy of the gene is not the short-term goal of his work. The metaphor he likes to use, which is pretty clever, is money. If, at one point, you were receiving a salary of nothing, you wouldn’t need to become a billionaire overnight to be happy. Translating that to medicine, he is saying that all corrected cells bring significant advantages (such as rapid growth and long lifespans) that can counterbalance many of the adverse side effects of unhealthy cells. Long suggests a maximum of 70% correction can rescue the phenotype, but even 30-50% correction can prevent eventual heart failure from DMD (the leading cause of death in DMD patients).

This seems like a break with what we typically expect from medicine. We’ve grown accustomed to grandiose promises of cures and to harsh treatments intended to completely eradicate disease. Perhaps a better aim in the immediate future is to preserve a person’s ability to lead a functional life, even if it means their disease isn’t entirely gone.

And if you’re reading this as a young scientist, curious to see if your journey will turn out as interesting and impactful as Long’s, he shares sage advice with Laura: Keep calm and CRISPR on! Novelty T-shirts coming soon, I’m sure. Don’t worry so much about the future, he says. Just keep pushing for your goals and eventually you’ll get there (good advice for us all).

Bio-Rad is a trademark of Bio-Rad Laboratories, Inc.

Finding a Good Antibody:
Part I — Selecting the Best Antibodies

The Potential for CRISPR Gene Editing in HIV