Infectious diseases and cancers are among the main causes of human deaths worldwide. One successful avenue found to treat these diseases is the large-scale production of therapeutic proteins. As a result, the demand for protein expression hosts and accompanying advanced bioprocessing technologies has increased.

From 2014 through 2018, 68 monoclonal antibodies (mAbs), 23 hormones, 16 clotting factors, nine enzymes, and seven vaccines were approved by the U.S. Food and Drug Administration (FDA) (Tripathi and Shrivastava 2019). This class of biopharmaceutical treatments is rapidly becoming the primary type of therapeutic developed by the pharmaceutical industry. Recent advancements in recombinant DNA production have permitted efficient production of recombinant proteins at higher yield and lower production cost at industrial scales. This has paved the way for new therapeutics, vaccines, and diagnostic reagents.

Using recombinant DNA to produce proteins has many advantages, including:

General process for production of recombinant proteins. The gene of interest, including elements required for transcription, is cloned into a suitable expression vector with a selective gene. The final vector is transfected into host cells, which are then screened for production of the desired protein. The most promising cells are transferred to a bioreactor for large-scale production.

Often, when purifying and manufacturing recombinant proteins, multiple chromatography steps are required, along with complicated conditioning of the feedstream. This elevates production costs and reduces recovery — issues that may be exacerbated by low protein expression, pH sensitivity, and limited stability.  For the purification of such proteins, mixed-mode chromatography resins have become a critical tool.

In a recent study, the recombinant protein EPA (the detoxified form of exotoxin A from Pseudomonas aeruginosa) was purified from an E. coli fermentate to >95% purity and recovery (Bio-Rad bulletin #7302). EPA, a ~80 kD single polypeptide with a theoretical pI of ~5.32, enhances the immune response of weak immunogenic antigens that are conjugated to it. At the time of this writing, several conjugate vaccines made with EPA are in clinical trials.

After the E. coli fermentate was produced and processed in the study described above, several mixed-mode, anion exchange, and hydrophobic interaction chromatography resins were screened using standard protocols. Only Nuvia aPrime 4A Resin met all the capture requirements.

Therefore, the capture chromatography step was performed using Nuvia aPrime 4A Resin. At modest salt concentrations and a neutral pH, impurities, such as host cell proteins, lipids, and nucleic acids, were eliminated in column flowthrough fractions. The target protein was successfully eluted using divalent metal ion (Ca⁺² and Mg⁺²) –containing buffers. Design of experiments (DOE) studies were used to determine that CHT Ceramic Hydroxyapatite Type I Media could be used for the polish step, resulting in 95% purity and greater than 75% recovery of the target protein. 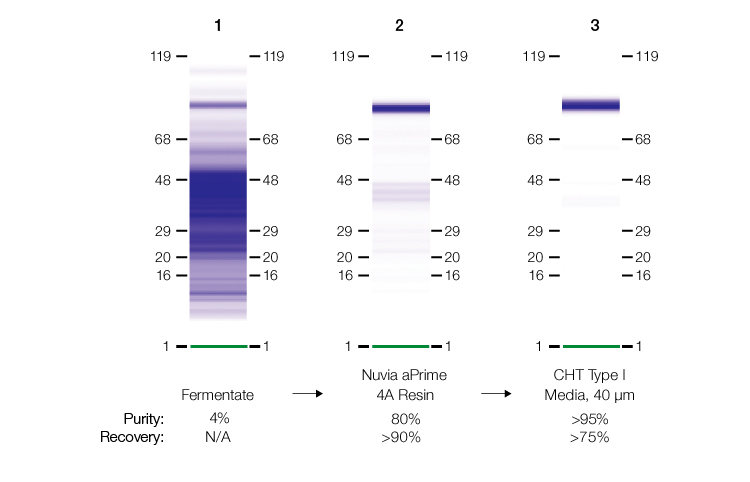 The purification of low-expressing recombinant proteins lacking affinity handles is often a daunting task. Finding an effective purification workflow that maintains purity and yield while mitigating the high costs associated with a complicated production process can be challenging.  Both Nuvia aPrime 4A and CHT Type I Mixed-Mode Resins offer efficient mass transfer in a range of flow rates. The two-step workflow — capture and polish — is robust and easily scalable for process production requirements.

For more information, refer to the full application note, Efficient Purification of a Recombinant Protein from Escherichia coli Fermentate with Nuvia aPrime 4A Resin.