Turning Back the Clock on Mouse Neural Progenitor Cells

Is the fate of an embryonic cell determined by the age of the cell or the age of the embryo? This is the question researchers at the University of Geneva (Geneva, Switzerland) set out to answer for some types of neural progenitor cells, which generate the neurons that make up the brain. Their results, recently published in Nature, show that the fate of one type of neural progenitor cell can be changed if the cells are transplanted from 15-day-old to 12-day-old mouse embryos (Oberst et al. 2019).

Apical progenitors (APs), a type of neural progenitor cell, give rise to different types of neurons as the embryo matures. In earlier stages of brain development, APs produce deep-layer–type (DL) neurons, which form part of the interior of the brain. Over time, APs transition to generating superficial-layer–type (SL) neurons, which are located closer to the brain’s surface. APs, DL neurons, and SL neurons can be identified based on their location, molecular markers, physiological properties, and gene expression profiles. 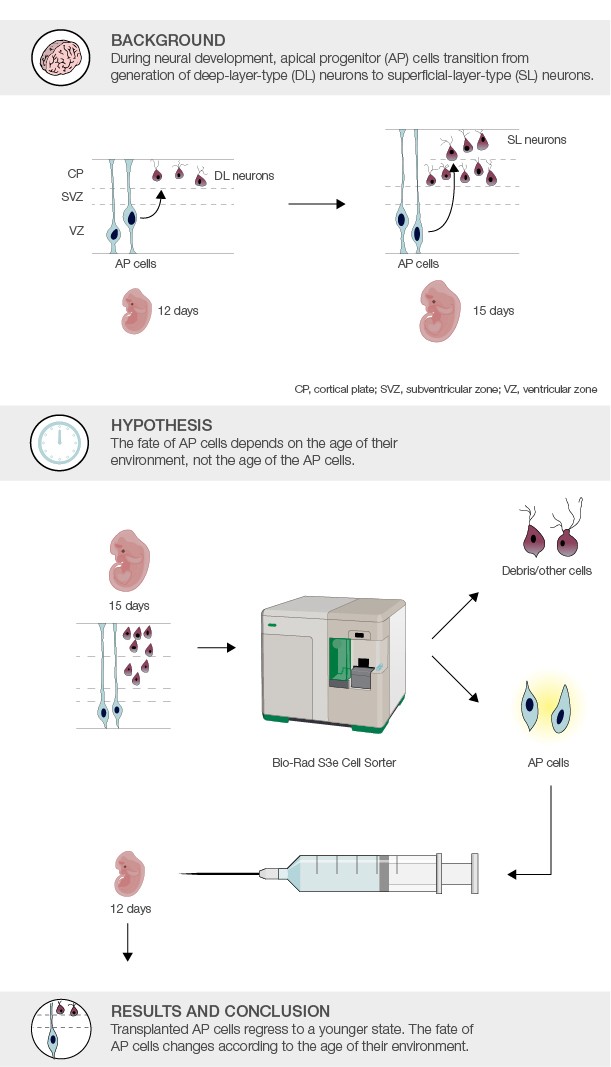 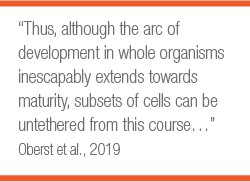 To explore how cell and embryo ages affect the fate of APs, authors Polina Oberst and colleagues used a Bio-Rad S3e Cell Sorter to isolate live AP cells from 15-day-old mouse embryos. These cells were then microinjected into 12-day-old mouse embryos in utero. Remarkably, they found that the transplanted AP cells adapted to the younger embryos, producing DL rather than SL neurons. When the transplanted cells were reisolated, their transcriptional profiles and physiological properties were found to be more similar to AP cells from the younger embryos than AP cells from older embryos, supporting a theory of regression of the AP cells to younger states.

The S3e Cell Sorter, used in this study, was designed to be gentle even when sorting at high speeds, thereby preserving cell viability and vitality. The ability of the S3e Cell Sorter to sort quickly also minimizes the time cells spend in the machine, which reduces stress, facilitates isolation of rare cell types in quantity, and helps to preserve ephemeral states in rapidly changing cells.

This work also required a cell sorter that could reliably distinguish APs from other neural cells. The S3e Cell Sorter ensures the purity of sorted cells and maximizes the recovery of rare cell types from samples. Additionally, the S3e Cell Sorter is novice-friendly and compact enough for benchtop sorting, eliminating the need to use a core facility. Its ease of operation also reduces training time and user-to-user variability.

Visit our website to learn more about the S3e Cell Sorter and use the augmented reality app for iOS devices to see how the S3e can fit in your lab.

For more information about this study, check out the original article in Nature.