Fluorescence-activated cell sorting is a valuable tool for research, allowing separation of a mixture of cells into distinct populations for analysis. But could the physical forces of sorting stress the cells, altering their behavior and confounding experimental results? Andrä et al. (2020) found that although cell sorting activated p38 MAPK stress signaling, no functional or structural changes were observable. The results indicate that jet-in-air systems such as the Bio‑Rad S3e Cell Sorter do not alter cell behavior.

Fluorescence-Activated Cell Sorting Has a Wide Range of Uses

Like regular flow cytometers, cell sorters analyze cells based on a fluorescent component such as a fluorescent antibody bound to a target of interest. While regular flow cytometers evaluate fluorescence properties, cell sorters physically separate cells based on those properties. Distinct populations of cells are collected in separate vials. Researchers can then use them for further experimentation by comparing sorted populations, or by studying one population.

Cells experience a range of forces during cell sorting that can cause stress and confound downstream results.

Andrä et al. examined the forces that cells undergo during sorting and assessed the effects on cellular responses. They used the Bio‑Rad S3e Cell Sorter, among other instruments, to study activation of p38 MAPK stress signaling and functional indicators of cell stress. Human peripheral blood mononuclear cells (PBMCs), murine splenocytes, and immortalized cells were studied. The investigators compared stress indicators of different cellular populations, including mock sorted cells. Mock sorted cells not treated with fluorescent antibodies were passed through a flow cytometer and sorted on scatter properties in order to isolate the mechanical and physical forces of cell sorting from the effects of antibody staining. The mock sorted cells were then compared with unsorted cells to assess the effects of mechanical and physical force.

Sorting Did Not Affect Cell Function or Structure

Cell survival is affected by p38 MAPK activation, so the researchers looked at viability. Cell survival was found to be similar in sorted and unsorted cell populations. The ability of T cells to perform antigen-specific killing is also linked to the p38 MAPK pathway. This function was not significantly impeded by cell sorting, although the researchers did note that primary CD8+ T cells might not be the most sensitive cell type to sorter-induced or environmental changes.

Gene Expression Was Not Significantly Affected by Cell Sorting

As a protein kinase, p38 MAPK is capable of activating transcription factors within many signaling pathways, it seemed likely that p38 MAPK activation could modify gene expression profiles in sorted cells. However, researchers found that p38 MAPK phosphorylation induced little or no change in mRNA expression patterns.

This is a welcome finding for anyone analyzing gene expression of cell populations after sorting, whether by RNA-Seq or other methods.

Findings Suggest That the S3e Cell Sorter Is Gentle on Cells

The experiments found that although cells responded to the external stresses of sorting, there were no meaningful changes to behavior or physiology. These results could help build confidence in fluorescence-activated cell sorting, with a device such as the S3e Cell Sorter, as a technique when downstream experiments on the sorted cells are needed. For example, during the isolation of low-frequency or rare cell populations followed by RNA-Seq in an experiment performed by Bio‑Rad (Figure 2). 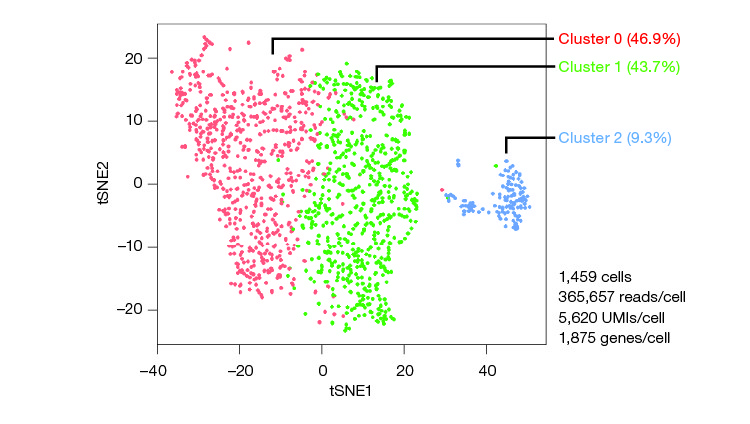 Compared with magnetic-activated cell sorting (MACS) or other bead-based approaches, the S3e Cell Sorter offers greater flexibility in marker selection. When used in combination with single-cell sequencing, the S3e Cell Sorter improves data quality by eliminating background RNA and reduces sequencing costs by ensuring that a homogeneous sample is free of dead cells and debris prior to being sequenced.

Findings from Andrä et al. suggest that fluorescence-activated cell sorting can be gentle on cells. This is positive news for anyone using systems such as the S3e Cell Sorter upstream of single-cell analysis or other experiments.

How to Make a Successful Vaccine