Progress almost always comes at a cost. One cost of productivity and economic growth for all industries is energy consumption. Bio-Rad — one of the largest life sciences company on the planet — must consume energy in the process of manufacturing goods for the life sciences industry. Like its customers, Bio-Rad recognizes that fossil fuel energy consumption has direct consequences on our atmosphere, water, land, and health. In considering sustainable energy alternatives, solar power made environmental and business sense. California, with its abundance of sunshine, has a long history of support for solar energy as the first state in the nation to bankroll solar installations with the California Solar Initiatives (CSI)  program. The east-facing IT building, located on the Bio-Rad headquarters in Hercules, California, was ideally situated for the company’s solar project pilot program.

Power plant emissions are responsible for approximately one-third of the nitrogen oxide, two-thirds of the sulfur dioxide, and one-third of carbon dioxide emissions nationally.1 Beyond solar, Bio-Rad is working toward implementing additional renewable energy sources and further reducing these air emissions.

This is the second installment in a three-part series highlighting green practices within Bio-Rad. The final installment will coincide with Earth Day, which is on April 22nd.

Since the solar system rollout in October 2010, sunny days are good days for the Bio-Rad IT building. The 868 solar panels, installed by Premier Power Renewable Energy, Inc., produce roughly 14% of the building’s energy. The panels cover the 30,000 sq. ft. rooftop and generate approximately 140 kW per hour on sunny days and about 40 kW per hour on rainy days. 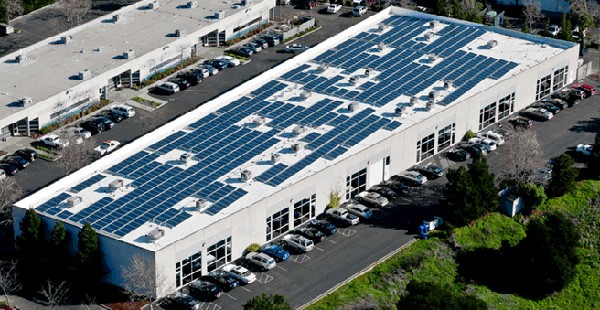 The remaining power demand for the building is drawn from Hercules Municipal Utility (HMU). Originally another building in the same complex was also slated for solar, but its smaller footprint and multiple rooftop air conditioning units made it less than ideal economically.

“The best buildings for commercial solar installations are flat roofed, single-story, and with a large footprint,” says Mark Santos, director of business development for Premier Power Renewable Energy, Inc., based in El Dorado Hills, California. “You’re always limited by system footprint in terms of how much power you can harvest.”

The total system size for the IT building is 204 kW D.C., which produces about 277,400 kW annually. This is enough power to run approximately 27 U.S. households for a year. (A typical U.S. household consumes approximately 10,000 kW per year.) In 2009, when Bio-Rad was paying $0.1626 per kW, this would have translated into a first-year energy offset value of approximately $45,000 in savings. While 277,400 kW a year seems like a lot of energy, office buildings are notoriously energy-demanding and there must be a certain level of sunlight for the system to switch on, making shade the enemy of solar power. 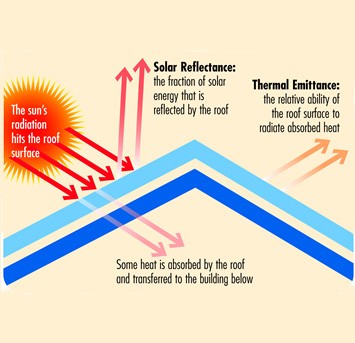 “This project was planned by my predecessor and implemented shortly after I arrived at Bio-Rad. The decisions he and the team made were spot on. They really wanted a roof that would reduce our energy demands,” says Don Kupka, director of global real estate and facilities at Bio-Rad. “The old roof on the IT building was black and undoubtedly absorbed a lot of heat. They decided to install a light-color insulated roof to reduce the heat transferred to the space inside.”

Economic Incentives
While the total cost of the 875 Solar Project was approximately $1.1 million, electricity the solar system produces is free and not subject to the ups and downs of energy markets. Bio-Rad purchased 28.5% less electricity from HMU in 2011 than in 2010, when the solar system was installed at year-end. California is a great solar market, in part, due to the high cost of electricity resulting from partial deregulation of utilities in 1996. (Before deregulation, the price of electricity was ~$0.03–0.06 per kWh; now Pacific Gas & Electric charges ~$0.40 per kWh.) Additionally, federal and utility incentives in place made going solar attractive as the project was getting underway. For instance, 1) the Renewable Energy Investment Tax Credit, allowing 30% of the purchase price to be deducted off the bottom line of taxes owed; 2) the HMU rebate program, inspired by the CSI (a division of the California Public Utilities Commission), which had started pooling money for commercial entities in December 2007; and 3) a federal solar-specific accelerated depreciation program that allowed for a first year deduction of 100%.

Bio-Rad is delighted with the success of its first solar installation. Facilities management monitors energy savings daily through real-time software provided by Draker Laboratories, Inc.The team is currently investigating other clean fuel alternatives and continues to learn from the best green practices of Bio-Rad customers like the University of California, Davis. UCD recently completed its West Village housing complex, which is the largest Zero Net Energy (ZNE) complex to date in the U.S. ZNE buildings generate as much energy as their residents consume over the course of a year. While not the whole solution, solar power has proved to be a step in the right direction, economically and environmentally, as it both lowers Bio-Rad’s energy bill and mitigates the environmental impacts of the company’s energy use now and in the years to come.

1Union of Concerned Scientists: Citizens and Scientists for Environmental Solutions.