For a comprehensive approach to gene expression studies that evaluates both transcriptional and translational regulation, we developed a streamlined protocol for parallel RNA and protein analysis using a single lysate produced from cultured cells. This was achieved using the SingleShot Cell Lysis RT-qPCR Kits, which eliminate the need for RNA purification and are compatible with both reverse transcription quantitative PCR (RT-qPCR) and western blot analysis. This method was further improved using stain-free gel technology, which allows for total protein normalization during western blot analysis and eliminates the need for prior protein quantification. The use of a single lysate also serves to reduce the burden of cell culture by reducing the number of cells required for analysis.

As the interrogation of biological systems reveals complex patterns of regulation between RNA and protein expession, co-analysis of these distinct cellular components becomes necessary. For example, although correlated expression of a specific mRNA and protein is expected, posttranslational regulation can lead to a decoupling of the relationship (Kaelin WG 2005). Traditional sample preparation methods purify either RNA or protein from a biological sample. This poses an issue for small samples that cannot be easily split and heterogeneous samples that may display differing levels of expression upon division.

Here, we introduce a streamlined protocol for parallel gene expression analysis using RT-qPCR and western blot analysis from a single, small cell culture sample using Bio-Rad’s SingleShot Cell Lysis Kit (Figure 1). We show that cells cultured in one well of a 96-well plate can be sufficient for analysis of both RNA and protein. This offers the flexibility to accommodate additional treatment groups or biological replicates within an experiment or a means to reduce cell culture costs.

Fig. 1. SingleShot workflow for RNA and protein detection. NTera 2 (NT2) cells were cultured in a 96-well plate for 4 days with or without retinoic acid (RA) treatment before being lysed in 30 µl of SingleShot Buffer. The cell lysate from each well was divided into two parts: (1) 5 µl of the lysate were mixed with SingleShot Buffer containing proteinase K (PK) and DNase to degrade genomic DNA. The sample was used to measure the mRNA levels of the genes of interest using RT-qPCR; (2) 25 µl of the cell lysate were mixed with 8.3 µl of 4x Laemmli Buffer before loading onto a stain-free gel for western blot analysis.

To assess the performance of this workflow, we investigated the expression of pluripotency factors in a human stem cell model system. NTera2 (NT2) cells are a human embryonal carcinoma cell line that, when treated with retinoic acid (RA), differentiate into neurons (Andrews 1984, Pleasure and Lee 1993, Pleasure et al. 1992). As NT2 cells differentiate, the level of pluripotency factors decreases and the level of neuronal factors increases (Deb-Rinker et al. 2005, Przyborski et al. 2003). We analyzed three transcription factors, NANOG and OCT4A, which mediate pluripotency and are downregulated during stem cell differentiation (Przyborski et al. 2003), and HOXB3, which controls cell differentiation via downstream target gene regulation (Viganὸ et al. 1998). We sought to determine if the levels of the OCT4A, NANOG, and HOXB3 mRNA and protein correlate, as their expression is regulated during the differentiation process.

Isolation of RNA and Protein

The NT2 cells were washed with PBS and lysed with 30 µl of SingleShot Cell Lysis Buffer (Bio-Rad Laboratories, catalog #1725095). For RNA analysis, 5 µl of each cell lysate were mixed with 20 µl of RNA lysis buffer (19 µl SingleShot Cell Lysis Buffer, 0.5 µl proteinase K, 0.5 µl DNase). The lysates were incubated at 25°C for 10 min, 37°C for 5 min, and 75°C for 5 min before proceeding with RT-qPCR. For protein analysis, 8.3 µl of 4x Laemmli Buffer, containing 10% v/v β-mercaptoethanol, were added to the remaining 25 µl of cell lysate in each well of the 96-well plate and mixed thoroughly. The lysates were collected before proceeding with electrophoresis.

Note: For buffer and lysate volumes for larger culture plates, refer to bulletin 6776.

The iTaq™ Universal SYBR® Green One-Step Kit components, provided in the SingleShot™ SYBR® Green One-Step Kit (Bio-Rad, catalog #1725095), were used to prepare 20 µl reactions for one-step RT-qPCR. Two microliters of RNA lysate and the appropriate PrimePCR™ Assays diluted to a 1x concentration were added to the reactions in the 96-well plate. The plate was loaded into a CFX96 Touch™ Real-Time PCR Detection System (Bio-Rad, catalog #1855195) and run using the following protocol: 50°C for 10 min, 98°C for 2 min, 40 cycles of 98°C for 5 sec and 60°C for 30 sec, melt curve analysis from 60–95°C with 0.5°C increments, and a final hold for 5 sec.

The gel and activated LF-PVDF membrane were assembled into the blotting sandwich according to the manufacturer’s instructions. The transfer cassette was inserted into the TransBlot® Turbo™ Transfer System (Bio-Rad, catalog #1704155) and the proteins transferred from the gel to the membrane (mixed MW mode: 2.5 A, 25 V max voltage, 7 min). The blotting sandwich was disassembled and the blot was placed on the stain-free/UV tray and imaged on the ChemiDoc™ Touch Imaging System (Bio-Rad, catalog #1708370) using the Stain Free Blot image settings.

The stain-free and chemiluminescence images were used to create a multichannel image in Image Lab™ Software, version 5.2.1. Total protein normalization was performed using the stain-free blot image as the total protein signal and the chemiluminescence image as the target protein signal. The reported average and standard deviation values were based on technical duplicates. 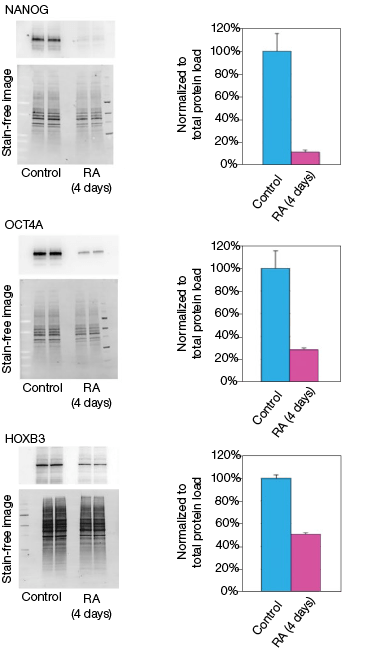 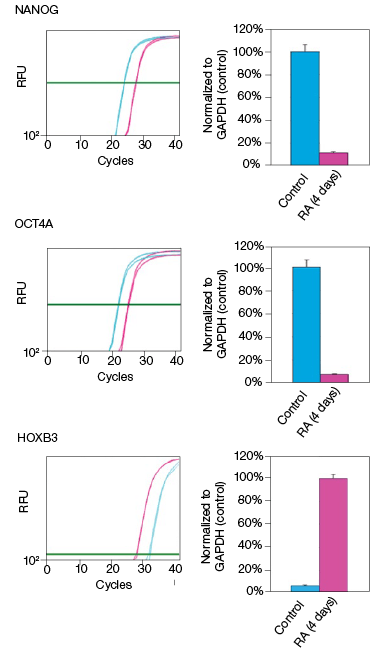 Protein assays are a means of determining sample concentration and are often utilized in western blotting to provide a way to load equal amounts of sample for comparison. In addition to the protein assay, most scientists measure the level of a housekeeping protein at the immunodetection step to confirm equal loading of the sample. Recently, total protein normalization has been adopted as a reliable alternative to using a housekeeping protein to confirm equivalent sample loading (Aldridge et al. 2008, Gilda and Gomes 2013, Vigelsø et al. 2015). Stain-free gel technology offers a method to visualize and measure the amount of total protein on the blot and provides an effective way to normalize the samples (Posch et al. 2013).

To determine whether stain-free gel technology can replace protein assays, we examined the change in GAPDH expression during NT2 cell differentiation. The GAPDH mRNA level remained constant in the control and RA-treated cultures, as indicated by the real-time PCR data (Figure 3). The protein extracts from two control and two RA-treated samples were loaded onto a stain-free gel for western blot analysis. From the chemiluminescence blot image, it appears that the GAPDH level decreased by approximately 30% in the RA-treated cells. However, the stain-free blot image shows that there was less RA-treated lysate loaded. After normalizing against the total protein load, the GAPDH protein levels were consistent among the control and the RA-treated samples. This result demonstrates that stain-free total protein normalization offers a reliable method to control for loading differences between samples, eliminating the need for a protein quantification assay. Of note, we compared protein yields between samples prepared via traditional RIPA-based lysis methods and SingleShot-based lysis methods and observed equivalent yields (data not shown). 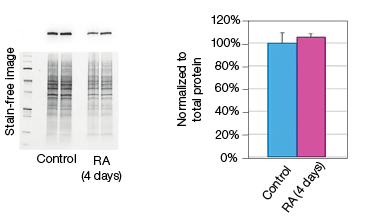 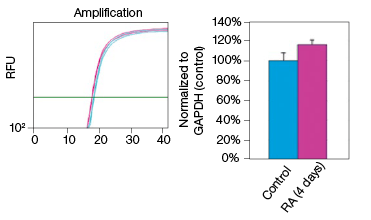 When Less Is More

It is common for scientists to grow cells in large petri dishes for in vitro RNA or protein assays such as RT-qPCR and western blotting. However, in our experiment, we demonstrate that a single well of a 96-well-plate can offer sufficient cell content for both RT-qPCR and western blot analysis. Normally, the amount of RNA or protein from a 96-well plate may not be sufficient for both RNA purification and a protein assay using standard extraction buffers. Fortunately, the SingleShot Buffer eliminates the need for RNA purification since it removes genomic DNA and the RT-qPCR reaction is tolerant of the RNA lysate. Furthermore, stain-free gel technology eliminates the need for a protein assay.

By reducing the size of the culture vessel to a 96-well-plate, the researcher can reduce the amount of cell culture reagents consumed and may shorten growth time as well. In our experiment, we needed to seed only 5,000 cells in each well and maintained the cultures using 200 µl of medium, while lysis was performed using only 30 µl of the SingleShot Buffer. This experimental setup would be very useful for labs using primary cells in research where the number of available cells is limited. By reducing the size of the cell culture, a researcher could also accommodate higher levels of replication, potentially producing more statistically significant and meaningful results. Additionally, the results reported here underscore the importance of monitoring both mRNA and protein expression levels without assuming a general correlation between the two. While we observed a correlative downregulation for two targets upon differentiation, we observed an inverse correlation for a third target, highlighting the complexity of the regulatory events taking place.

In summary, the protocol presented here for parallel gene expression analysis from small cell culture samples using RT-qPCR and western blot analysis is valuable because it offers an integrated view of gene expression and protein levels to validate potential biomarkers. We demonstrated its benefits by monitoring three transcription factors in NT2 cell differentiation. The same analysis could be applied to validate other biomarker candidates or transcription factors. Integrated gene/protein biomarkers and interaction networks have gained attention in the research community and have been used to monitor drug response in cancer research (Warsow et al. 2013). This workflow utilizing SingleShot Cell Lysis Kits provides a useful tool for facilitating such research.

Visit the SingleShot Product Page for specifications and ordering information.

Bio-Rad’s thermal cyclers and real-time thermal cyclers are covered by one or more of the following U.S. patents or their foreign counterparts owned by Eppendorf AG: U.S. Patent Numbers: 6,767,512 and 7,074,367.