Colorectal cancer (CRC), the third most common cancer in both men and women, is the second leading cause of cancer mortality in the world. As a CRC neoplasm develops and progresses, its pattern of gene expression changes. Thus, differentially expressed genes can be used as biomarkers to assess and monitor CRC neoplasms (Chan et al. 2008, Jube et al. 2012, Nummela et al. 2012, Wu et al. 2012).

Clinical and translational research commonly relies on RT-qPCR (described in detail in the Applications & Technologies pages of the Bio-Rad website) for assessment of known or putative biomarkers to monitor disease. Such work is often limited by the large number of samples that need to be processed, the size of the biomarker panel, the high cost of the RT-qPCR reagents, and the time involved in setting up and running the experiments. One way to overcome these limitations is to make RT-qPCR faster and less expensive. Instead of performing reverse transcription and qPCR in two separate steps, the two reactions can be combined into a single one-step RT-qPCR reaction. Another approach is to analyze several target genes simultaneously in multiplex reactions. For further time and cost savings, one-step RT-qPCR and multiplexing can be combined into multiplex one-step RT-qPCR. In this case, an RNA sample is combined with a one-step RT-qPCR reagent and two or more probe-based target gene PCR assays. The mix then undergoes reverse transcription followed by multiplex qPCR in a real-time PCR instrument.

One-step RT-qPCR was performed using the iTaq Universal Probes One-Step Kit as directed by the manufacturer on a CFX96™ Real-Time PCR Detection System (Bio-Rad). For all target genes, primers and probes were used at 250 nM final concentrations. For the GAPDH reference gene, primers were used at 100 nM and the probe at 250 nM final concentrations. The GAPDH assay included a lesser amount of primers because GAPDH is highly expressed; lowering the concentration of GAPDH primers prevents GAPDH amplification from depleting reaction components. Cycling conditions were 10 min at 50°C (reverse transcription), 3 min at 95°C followed by 40 cycles of 10 sec at 95°C, and 1 min at 60°C.

Each patient RNA sample (1 ng) was analyzed by one-step RT-qPCR in both triplex and singleplex. Each sample was analyzed four times independently.

We chose to analyze a panel of four biomarkers that are reported to be overexpressed in CRC. COL1A1, COL3A1, and TGFBI act in the extracellular matrix receptor interaction pathway (Chan et al. 2008, Nummela et al. 2012, Wu et al. 2012), whereas HMGB1 has potential roles in tumor cell survival and metastasis (Jube et al. 2012). 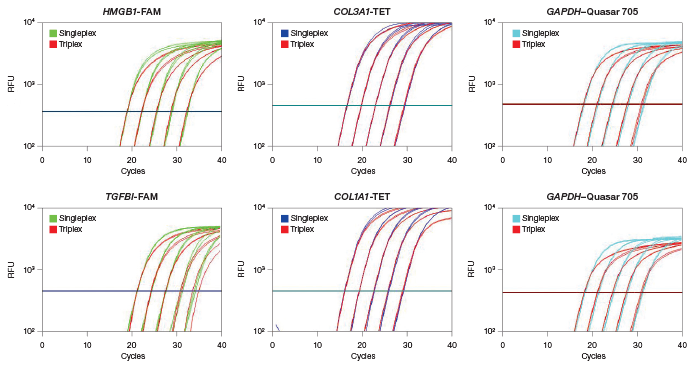 Analysis of Samples from Patients with CRC

To confirm that triplex and singleplex assays yield equivalent results we analyzed RNA samples from two patients with CRC. We obtained two RNA samples from each patient: one sample from a malignant colon region and the other sample from an adjacent colon region that was not cancerous. We then quantified the expression of each biomarker using triplex and singleplex one-step RT-qPCR, normalized biomarker expression with GAPDH, and determined whether each biomarker exhibits differential expression in cancerous tissue. Our results show that, in the two patients analyzed, TGFB1, COL1A1, and COL3A1 are upregulated in cancerous tissue while HMGB1 is not (Figure 2). Importantly, the triplex and singleplex assays produce results that are statistically equivalent. These findings confirm that our triplex assays can substitute for singleplex assays without compromising the quality of results. This implies that in future work, patient samples can be reliably analyzed by triplex one-step RT-qPCR.

Our work demonstrates that properly validated one-step RT-qPCR triplex reactions using Bio-Rad’s iTaq Universal Probes One-Step Kit generate results that are equivalent to singleplex reactions. Implementing multiplex one-step RT-qPCR can lead to significant savings in time and reagent costs relative to traditional singleplex RT-qPCR. Multiplex one-step RT-qPCR can also lead to improved data quality since researchers need to perform only one reaction using a single reagent. This saves time and can lead to better results because there is no chance of manipulation error between the reverse transcription and qPCR steps. Multiplex analysis also reduces sample utilization because fewer reactions need to be processed. Lastly, because each multiplex reaction can be internally controlled, with GAPDH in our example, there will be less variability in experiments involving relative gene expression.

FAM and TET are trademarks of Applera Corporation. Quasar is a trademark of Biosearch Technologies, Inc.

Myriad RBM is a trademark of Myriad RBM, Inc.

Purchase of iTaq Universal Probes One-Step Kit includes an immunity from suit under patents specified in the product insert to use only the amount purchased for the purchaser’s own internal research. No other patent rights are conveyed expressly, by implication, or by estoppel. Further information on purchasing licenses may be obtained by contacting the Director of Licensing, Applied Biosystems, 850 Lincoln Centre Drive, Foster City, California 94404, USA.