Surface plasmon resonance (SPR) biosensors analyze biomolecular interactions in a label-free and real-time manner. The ProteOn XPR36 protein interaction array system is an SPR platform for analyzing label-free biomolecular interactions (described in detail in the Applications & Technologies portion of the Bio-Rad site). The ProteOn liposome capturing kit used with the system provides a novel hydrophilic surface chemistry that allows for advanced applications such as drug-lipid interaction analysis. This kit can be used to evaluate small molecule drug delivery by measuring properties of drugs and assessing drug carrier systems. This technote presents the ability of the ProteOn liposome capturing kit in analyzing liposome-small molecule interactions and shows a comparison of lipophilic and hydrophilic lipsome surface chemistries.

The 6 x 6 biomolecular interaction array of the ProteOn system

Fig. 1. The configuration of the 6 x 6 biomolecular interaction array.Screening of the Interactions Between Small Molecule Drugs and Liposomes

Fig. 5. Sensorgrams and normalized maximum signals of interactions of the drugs and liposomes.

Fig. 7. Correlation of responses with the surface density of liposomes.

Fig. 4. The experimental design of the screening of fourteen small molecule drugs against five liposomes using the 6 x 6 configuration in the ProteOn XPR36 system.

Fig. 1. The configuration of the 6 x 6 biomolecular interaction array. The interactions are realized through the formation of six ligand channels followed by six perpendicular analyte channels on the surface of a sensor chip. The 6 x 6 configuration enables highly efficient optimization of experimental conditions, novel referencing options for high data quality, and high-throughput sample analysis.

Lipid vesicles such as liposomes have been applied in SPR biosensors for analyzing cell membraneinvolved biomolecular interactions. Liposomes can be used to construct a lipid bilayer environment, thus this approach facilitates the characterization of cell membranerelated biological factors, such as the partition of small molecule drugs across cell membranes.

In order to apply liposomes in SPR biosensors, a method must be used to capture liposomes on the surface of sensor chips. The conventional method is based on a lipophilic surface chemistry, such as covalently linking alkyl groups to the chip surface to anchor liposomes through lipophilic interactions. Sensor chips or kits now on the market that use this method include the ProteOn GLC lipid kit (Bio-Rad Laboratories, Inc.) and the Biacore L1 sensor chip (GE Healthcare). The workflow for application of the GLC lipid kit is shown in Figure 2. This method is effective in many liposome-based interaction analysis cases. However, its applications are limited by the drawbacks, which include the risk of liposome structure rapture, incomplete surface regeneration, and nonspecific binding of analytes to the lipophilic surface in the following interaction analysis step.

Small molecule drugs with ideal efficacy should be both soluble in aqueous solution and able to pass through lipophilic matter such as cell membranes. The balance of hydrophilicity and lipophilicity is an essential aspect in drug delivery because it indicates the drugs intestinal permeability and efficacy to intracellular targets of small molecule drugs.

Thus, in order to optimize that balance during the drug discovery process, many in vitro methods to analyze the drug partitioning across cell membranes have been proposed, such as partition coefficient analysis using an equilibrated system of aqueous solution and n-octanol (Buchwald and Bodor 1998). However, these methods do not establish an interface of aqueous solution and lipid bilayer structure, thus they may not be able to accurately predict drug transport across biological membranes. Researchers have been analyzing drug partitioning using liposomes, which accurately mimic the lipid bilayer geometry and ionic characteristics of cell membranes, allowing a good correlation to in vivo analysis of intestinal permeability of small molecule drugs (Balon et al. 1999). In this report, a variety of liposomes were captured on a sensor chip surface using the ProteOn liposome capturing kit, and small molecule drugs were screened against these liposomes to assess their partitioning characteristics across cell membranes of different types.

As a label-free SPR biosensor, the ProteOn XPR36 system is able to directly analyze the interactions between small molecule drugs and liposomes, serving as an ideal platform for the liposome-based in vitro characterization of drug partitioning and drug carrier systems (Danelian et al. 2000, Baird et al. 2002).

Screening of the Interactions Between Small Molecule Drugs and Liposomes

Using the 6 x 6 configuration in the ProteOn XPR36 system, five different types of liposomes were captured on the surfaces of the vertical channels (ligand channels) by applying the ProteOn liposome capturing kit as instructed in the product manual (www.bio-rad.com/lcpkit). Fourteen small molecule drugs were injected in the horizontal channels (analyte channels) in three consecutive steps to screen the interactions between the drugs and the liposomes. The experimental design is shown in Figure 4. The sensorgrams of the interaction analysis are referenced to a blank surface (either a blank ligand channel or interspots) and a blank injection (simultaneous buffer injection in an analyte channel) (Bio-Rad Bulletin 5390). The screening results are shown in Figure 5. 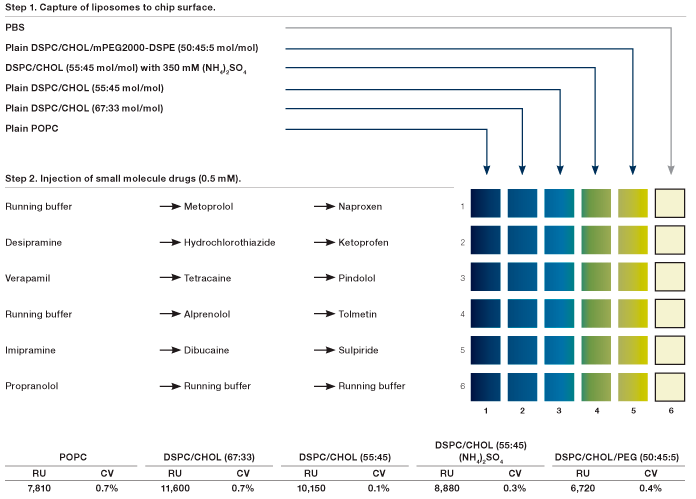 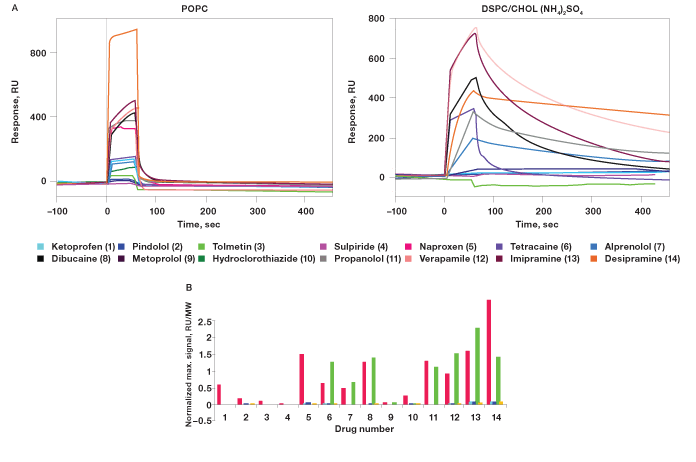 The seven compounds that bound to DSPC/CHOL (NH4)2SO4 are weak bases (Drug numbers 6, 7, 8, 11, 12, 13, and 14). The three weak acids did not show binding to this ammonium liposome (Drug numbers 1, 3, and 5). This result is consistent with the theory that weakly basic small molecule drugs are retained in the acidic environment inside the ammonium sulfate gradient liposomes. Four drugs that showed strong interactions with POPC and DSPC/CHOL (NH4)2SO4 were chosen for further dose-response analysis: tetracaine, imipramine, dibucaine, and desipramine.

The four small molecule drugs were prepared in a twofold dilution series ranging from 500 to 31 M and injected in the analyte channels. The interactions on the 6 x 6 array were measured and the sensorgrams obtained from the ligand channels of POPC and DSPC/CHOL (NH4)2SO4 are shown in Figure 6. The maximum responses in the sensorgrams are plotted against the analyte concentrations and the following facts are observed: In most cases, biphasic binding was observed, indicating complex binding mechanisms that may have occurred close to the penetration of drugs into the liposomes. The term biphasic binding means that the observed interaction is composed of fast and slow binding mechanisms. Different interaction patterns were observed between the two liposomes: POPC showed fast association and fast dissociation, while DSPC/CHOL (NH4)2SO4 showed biphasic binding and much slower dissociation. In some cases, only the slow phase is observed. This is in agreement with the active loading mechanism accumulation of drug molecules inside the liposomes when the ammonium gradient is formed.

The results demonstrate that this drug delivery model can be used for the evaluation of drug partitioning across cell membranes. 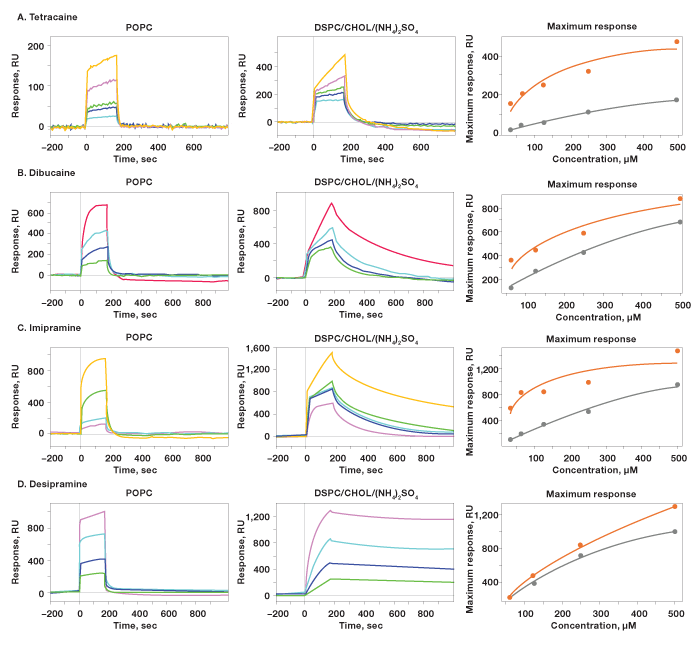 Fig. 6. Dose-response analysis of four small molecule drugs: A, tetracaine; B, dibucaine; C, imipramine; D, desipramine. The sensorgrams were obtained from the ligand channels of POPC and DSPC/CHOL (NH4)2SO4. The two liposomes were captured to the level of 7,800 RU and 8,900 RU, respectively. The small molecule drugs were injected in a twofold dilution series ranging from 500 M to 31 M. The maximum responses in the sensorgrams are plotted against the analyte concentrations for each liposome-drug interaction. DSPC/CHOL (NH4)2SO4 (); POPC (). RU, response units.

While both the lipophilic and hydrophilic surface chemistries showed very good performance in the liposomesmall molecule interaction analysis, the absolute values of responses in analyte injections were significantly different between the GLC and LCP sensor chips. At similar liposome surface densities, most absolute values of responses are several-fold higher on the LCP sensor chip using the ProteOn liposome capturing kit. An explanation is that the DNA linker between liposomes and the chip surface reduces the steric hindrance to access the entire surface of a liposome particle. Also, the hydrophilic surface chemistry is beneficial for maintaining intact liposomes, which further guarantees the data quality in applying this drug delivery model. This advantage results in higher performance of the novel hydrophilic surface chemistry compared with the conventional liposome capture method.

Biacore is a trademark of GE Healthcare.