In protein interaction studies, the most common technique to covalently bind proteins to biosensor chips is amine coupling — generating an amide bond between the surface carboxylates and primary amines of the proteins. Amine coupling is usually performed using 1-ethyl-3-[3-dimethylaminopropyl] carbodiimide hydrochloride (EDC) together with N-hydroxysuccinimide (NHS) or N-hydroxysulfosuccinimide (sulfo-NHS). The EDC molecules activate the surface carboxyls by generating amine-reactive intermediates. However, these intermediates are very unstable because they undergo rapid hydrolysis in aqueous solution. Adding sulfo-NHS (or NHS) to the activating solution increases the amine coupling efficiency by converting the unstable species to amine-reactive sulfo-NHS esters that are stable enough for spontaneous reaction with amine-containing targets. One limitation of this procedure is that the two activation reagents can also react with each other, and therefore standard protocols of biosensor chip activation require premixing of the EDC and sulfo-NHS solutions just before the injection.

The ProteOn™ XPR36 protein interaction array system, which uses surface plasmon resonance (SPR) technology, expands the capabilities of the traditional SPR biosensor workflow by enabling multiple quantitative binding experiments to be run in parallel. The ProteOn system integrates a unique 6 X 6 interaction array for the analysis of up to six ligands with up to six analytes. It is also possible to immobilize 36 individual ligands that are measured simultaneously, to allow high-throughput protein/antibody screening and epitope binning and mapping (Jiang et al. 2010; Abdiche et al. 2011). In those applications, the six channels on the ProteOn chip being activated gradually. In each binding cycle, a single channel is activated by the EDC and sulfo-NHS mixture, followed by an injection of six different ligands and a deactivation step. Traditionally users would premix the activation reagents before each binding cycle.

This protocol for unattended activation includes a coinjection step (CoInject) — two samples are drawn in sequence from separate vials or wells, and then injected consecutively over the chip surface with no running buffer flow in between. During CoInject activation, first EDC is injected, followed by sulfo-NHS.

In the ProteOn Manager™ software, start a new protocol. In the Protocol Steps page, click and drag Immobilization group into the steps list. Then, delete the Activate step, and insert a CoInject Ligand step instead, just before the Ligand step. 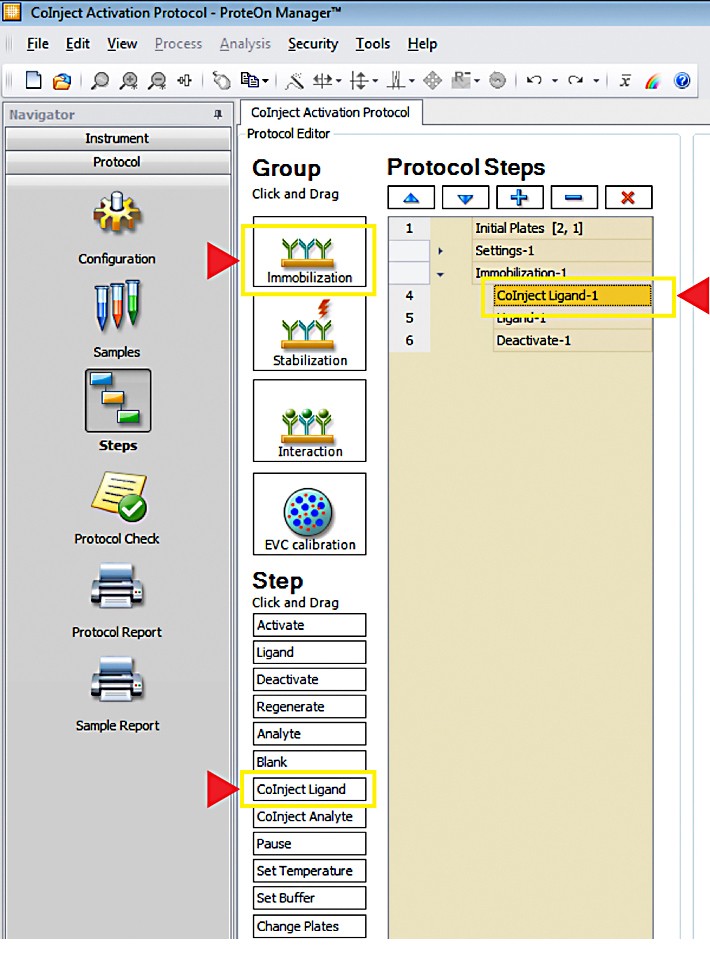 In the Steps Detail page, change the flow rate, contact time, and injection volumes for the two activator solutions as desired. 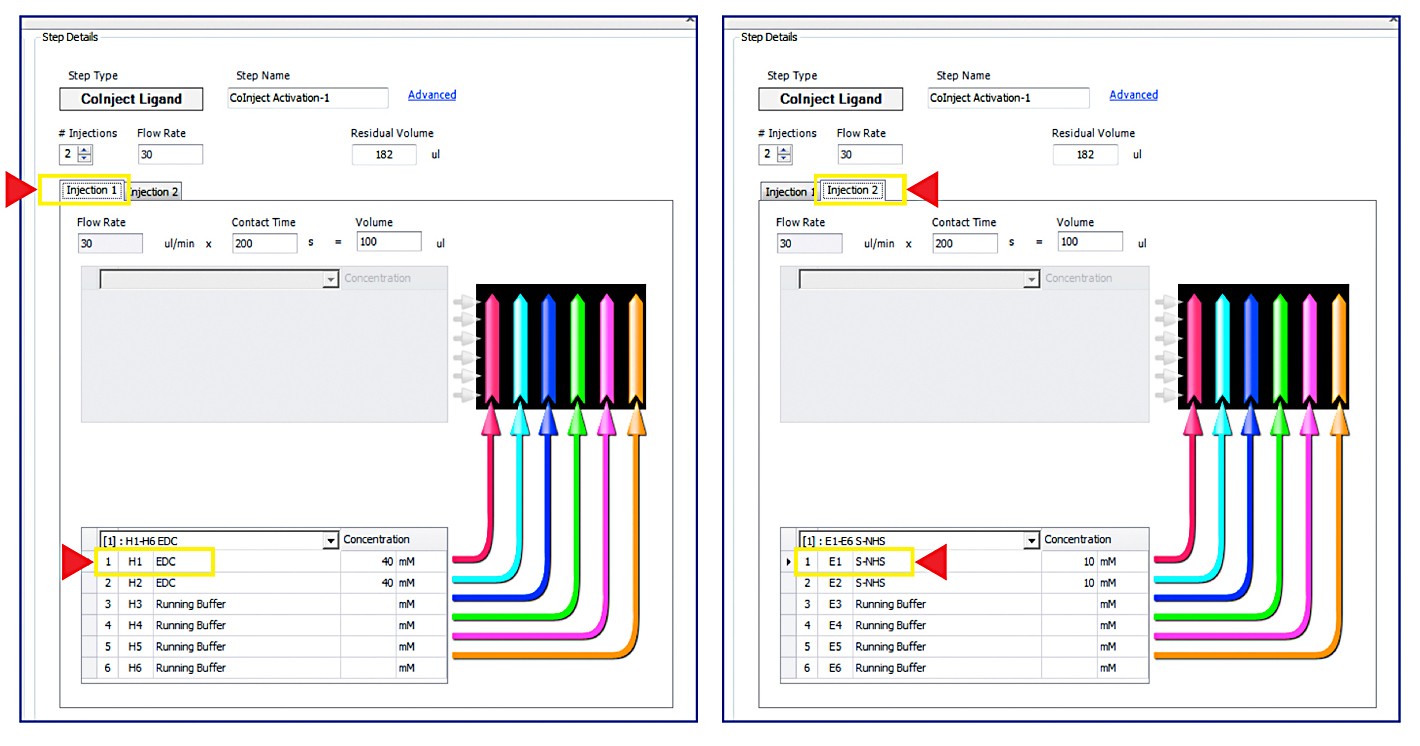 Finally, edit the Ligand and Deactivate steps details as in standard activation protocol. 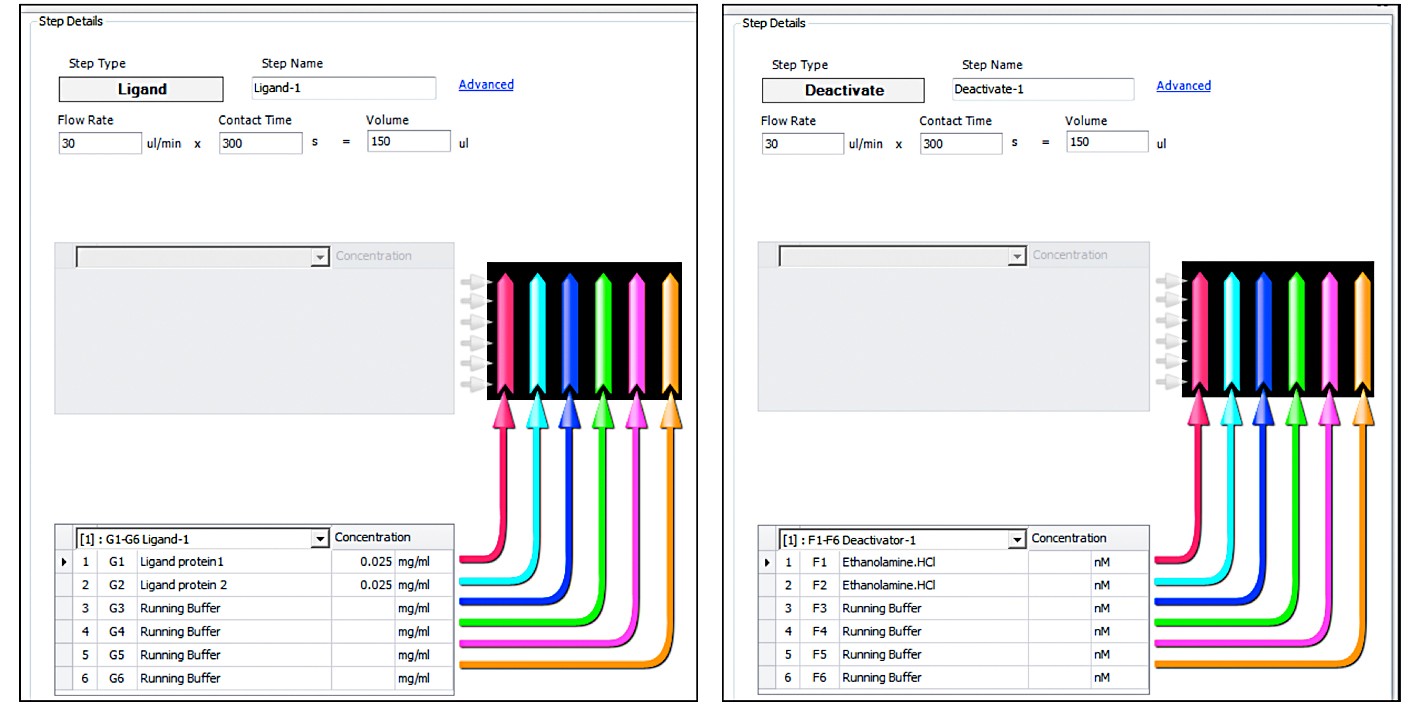 Editing the Ligand and Deactivate steps.

With all three amine-coupling ProteOn sensor chips (GLC, GLM, and GLH), it is possible to reach similar ligand density and uniformity using the standard or CoInject activation. With the GLC and GLM sensor chips, it is possible to reach the medium and also the very low ligand densities that are often needed for the high quality kinetic analysis of protein-protein interaction applications. With the GLH sensor chip, very high ligand densities (10,000–20,000 RU) needed for protein-small molecule applications can also be obtained using the CoInject activation protocol. 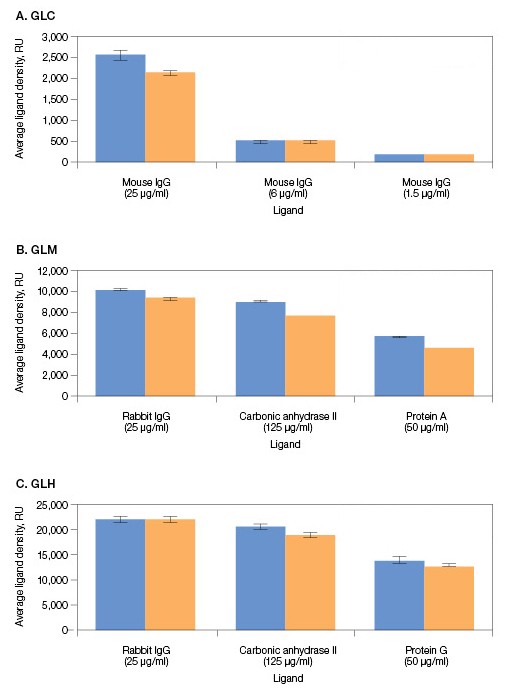 Comparison of ligand densities obtained by standard and CoInject activation with GLC, GLM, and GLH sensor chips. Each graph represents the results of a single chip. Each two adjacent channels were bound with the same ligand protein, one using the standard and the other using CoInject activiation. The density values are an average of the six interaction spots along each channel, and the error bars represent the standard deviation between these six spots. In all binding experiments, the activator solutions were 40 mM EDC and 10 mM sulfo-NHS. The activator injection volumes for the single injections were 60 µl (GLC) and 200 µl (GLM, GLH). The activator injection volumes for the coinjections were 30+30 µl (GLC) and 100+100 µl (GLM, GLH). Protein ligand injection volumes were 60 µl (GLC), 180 µl (GLM), and 400 µl (GLH).