A conversation about South American frogs started Ray Cinti on the road to a new way of teaching high school biology. Cinti had always taken his students from Convent of the Sacred Heart High School in San Francisco to Muir Woods National Monument, north of the city, where they learned the basics of redwood ecology. However, he had recently been wondering if his students might conduct more meaningful research in this preserve. Then he happened to speak to a researcher at the University of San Francisco, and a light bulb lit up for him.

“I was considering further study in biology, and the professor I met with told me about research she does in South America with frogs,” Cinti says. The researcher described how she sampled frog groups, then analyzed a specific gene as an indicator of their genetic diversity. Her analysis found that the frogs’ diversity has cratered, probably as a result of habitat destruction, pollution, and climate change. Fragmented into small groups that can breed only among themselves, the frogs have lost the rich genetic variation they need as a species to adapt to future changes.

“The frogs are about to go down an extinction vortex. They’re all going to die,” says Cinti. “I sat there stunned when the professor told me this. She added, ‘It’s easy to see the loss of genetic diversity play out in frogs because their lifecycle is short. It’s much harder to see in organisms that live for many years.’ 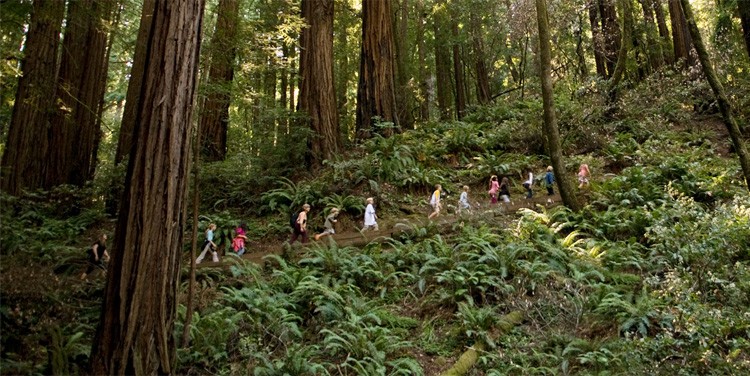 Muir Woods National Monument is a redwood preserve north of San Francisco. Cinti regularly brought his biology classes here, but wanted to find more advanced experiments they could perform in studying the trees. Photo courtesy of Save the Redwoods League.

“I came home thinking, ‘Hmmm…organisms that live for many years,’” Cinti recounts. “Then I realized: the redwood forest is the frogs. We’ve killed 95 percent of them. We’ve isolated them into little islands like Muir Woods or Redwood State Park, where they could be so genetically similar now that climate change or a new germ entering the woods could kill all the trees.”

As he tried to get his students more engaged with Muir Woods, Cinti looked into an education grant from the Save the Redwoods League. However, the grant asked for higher-level experiments than Cinti’s students currently performed, so he had put it aside. 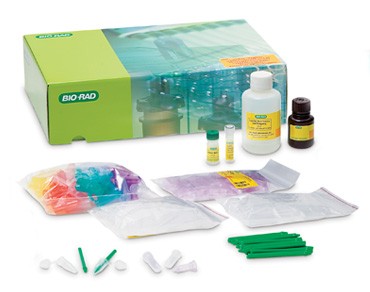 In another bit of serendipity, Cinti attended the 2008 National Science Teachers Association conference. There he noticed the Biotechnology Explorer Cloning and Sequencing Explorer series on display at the Bio-Rad table. This set of modules provides educators with materials and curricula for a lab-based course centered on a plant of their choice. The procedures begin with DNA extraction then move on to PCR, electrophoresis, transformation, microbial culturing, and bioinformatics. Students get the tools to extract, amplify, sequence, and analyze a gene from the glyceraldehyde-3-phosphate dehydrogenase (GAPDH) family for their chosen plant. The Cloning and Sequencing Explorer series course concludes with students reporting their gene sequences to the National Center for Biotechnology Information’s GenBank database.

Cinti realized he could apply the experiments in the Cloning and Sequencing Explorer series to the coast redwoods in Muir Woods. “I thought, ‘This is it,’” he remembers. “‘I don’t have to make up something to fulfill a grant. We need to save the redwood trees. Understanding their genetic diversity is saving the redwoods. No more talk! The students and I will go into the forest in Muir Woods and extract DNA from the trees. We’ll look at the GAPDH gene and use that as the comparison. We’ll see how similar these trees are to one another.’”

Cinti then applied for and received the education grant from the Save the Redwoods League. In order to carry out the experiments, he created a new elective class, Conservation Biology, which departs from the typical model for a survey or AP biology course. Cinti points out that, though it’s called Conservation Biology, it’s really a biotechnology course. He made a conscious choice in choosing the name because, as he puts it, “What a biotech scientist does isn’t just biotech. She does biotech because she’s trying to come up with a test for HIV, or a protein medicine, or a cure for a disease. We’re trying to protect and preserve biodiversity.” 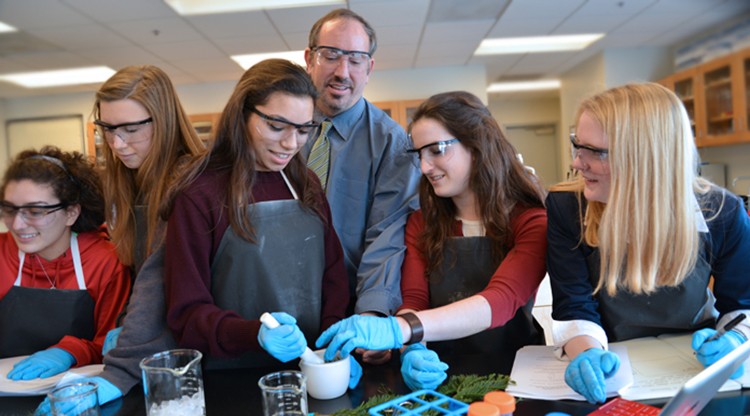 With the class now in the midst of its fourth year, Cinti has gained some perspective on just how those changes have played out. Unlike most high school or introductory college courses, Conservation Biology functions as an ongoing lab, with each year’s class building on previous classes’ results. Students do the entire cloning and sequencing workflow every year. In the first year, students were able to sequence only one tree from Muir Woods. In the most recent year, as students and teacher both became more adept at troubleshooting and running the protocols, they sequenced four trees. They’re now in the process of getting these sequences posted on GenBank.

Cinti considers the college-level protocols — which include such sophisticated biotechnology techniques as column chromatography, nested PCR, and plasmid purification — to be transformative for the 10th, 11th, and 12th-grade students who take the class. “Inquiry isn’t just asking what’s going to happen,” he says. “It’s also dealing with the unknown, with unexpected results. Over the months I watch the students change from kids who just don’t want to make mistakes to more adult thinkers who look at mistakes as opportunities. I find myself huddling around the table with them as if in a graduate seminar, looking at our protocols, asking, for example, ‘How do we optimize the PCR buffer for ground-up redwood needles?’”

Cinti has observed significant differences in how his students learn using the Cloning and Sequencing Explorer series experiments. Rather than simply mastering content for an exam, he finds that they are asking more and better questions. The goal of redwood conservation also keeps students engaged, to the point that past students stay connected with the class through social media, and post congratulations for new tree sequences.

Learning from experience, not just content, is key to what the Cloning and Sequencing Explorer series offers the class. Cinti likens it to cooking. “You can read a recipe on the board and say you understand it, and you do. But you also don’t. Because whatever you say, you have to go in the kitchen and start mixing things, then look at the outcome. Did it taste right? Why not? What happened? So you really do have to pour the plate; you must grow the bacteria; you must cut the plasmid; you must pipet the enzyme that ligates it. And see what happens. Then you get it.”

Students’ lab notebooks reflect this hands-on kind of learning. Rather than “playing school” and writing notes to satisfy the teacher’s requirements, Cinti finds that Conservation Biology students learn to write detailed lab notes for themselves, motivated by the desire to finish the experiments, sequence their redwood, and make a unique and genuine discovery. “When we get the results, I tell the students, ‘You pulled DNA out of a redwood’s needles and you sequenced it. No human being has ever seen this result before.’ The students can’t believe they’ve done it.”

Thus far, Cinti’s students have reported their findings to the Save the Redwoods League, which has provided three grants for his Conservation Biology class. Last year, the students presented their results at the National Science Teachers Association conference. They are currently working together on a paper to submit to a scientific journal. Cinti is also developing a set of QR codes to install in Muir Woods so visitors can refer to the online GAPDH sequences for specific trees. And this spring, the class plans to hold a symposium on their work at Convent of the Sacred Heart High School.

While the number of completed redwood sequences remains too small to draw any conclusions about the trees’ genetic diversity, Cinti is sure that his students’ data will reach critical mass. “I tell my 9th graders in general biology, ‘You guys might be the ones who seminar our results with the head biologist at Muir Woods,’” he says. “There’s no data in the literature yet that looks at the genetic diversity in these parks.” Conservation Biology alumnae still follow the class on Facebook, posting congratulations when he announces a new sequence completed. “The material doesn’t go away. It keeps going like a torch passed from one year to the next,” he muses.

“A great model of teaching is to be a learner,” Cinti says, reflecting on how the class has led him to change his teaching. “This is the big difference between the 20th century classroom and the 21st century classroom. We want to teach how to learn. In Conservation Biology, I’ve been learning about the genetic analysis of coast redwoods right alongside my students. I couldn’t have done it without Bio-Rad. Their Biotechnology Explorer series has been so helpful in this. It simply allows teachers to do what we want to do.”

Learn more about the Cloning and Sequencing Explorer Series as well as the full range of Biotechnology Explorer life science education products.