3 Moments of Inquiry with Bio-Rad’s pGLO™ Transformation and Inquiry for AP Biology: A ThINQ! Investigation Kit

“Inquiry-based” is a buzzphrase in education, a catchall often associated with new and better ways to learn science. Most people who hear it have a rough sense of what it means: doing away with rote memorization while freeing students to ask questions and conduct realistic experiments. The value of the term seems obvious; who today doesn’t believe in students as investigators, in learning science by asking questions, as real scientists do?

As everyone from the National Research Council to Bill Nye touts inquiry-based science learning, teachers find themselves charged with realizing this vision. While most probably agree on its promise, the practical question remains, “How?” How does the grand vision translate into day-to-day lessons? How do those day-to-day lessons play out? How do students stay engaged through complex labs? And how do teachers conduct these more open-ended activities and still meet educational goals?

In other words, what might an actual “inquiry-based” science investigation look like in the classroom? One answer to this question played out recently in San Diego, California.

Transformation at the Bishop’s School

Recently, Ms. Z conducted such an investigation with her AP Biology class using Bio-Rad’s pGLO Transformation and Inquiry Kit. Part of a new line of ThINQ! Inquiry Investigation products for teachers, the pGLO Transformation and Inquiry Kit includes both the materials and curriculum for a multi-day lab. In the lab, students insert several new genes into E. coli bacteria, enabling them to express green fluorescent protein, vividly illustrating AP Biology Big Ideas 1 (the process of evolution) and 3 (how living systems use information). 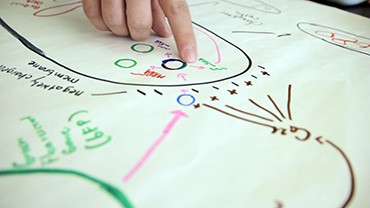 Left: a student points to her diagram of the transformation process, part of the preparation for the series of labs. Right: Zedalis speaks to her class on day one of the investigation.

“I’m looking not necessarily for breadth of content, but for depth of knowledge,” says Zedalis. “The new curriculum is based on learning objectives that merge content with science practices. I tell [the students], ‘when you start acting like scientists, you start thinking like scientists.’”

It’s day one of the investigation. The students have prepared for the lab by drawing diagrams to illustrate the protocol and the transformation process. Today, they’re going to transform their bacteria, inserting a pGLO plasmid into the bacterial nuclei that contains three genes: 1. beta lactamase (bla), which will make them ampicillin resistant; 2. araC, enabling them to metabolize arabinose; and 3. GFP, a modified jellyfish gene which will make them glow under UV light. 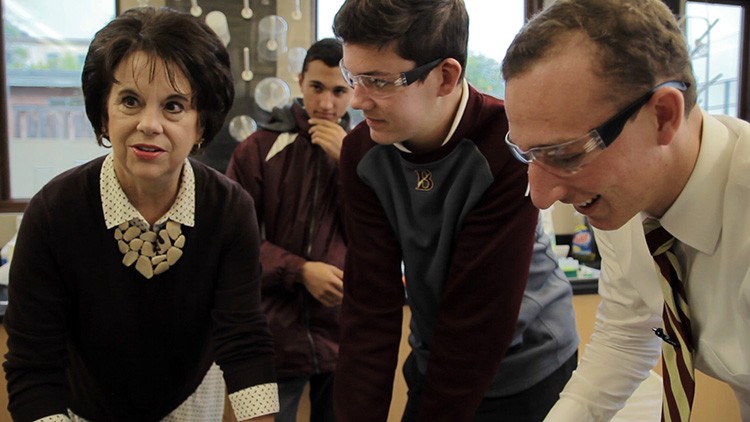 “This is the first time that the kids have been exposed to this technology, the first time they’ve heard about the concepts, the first time we’ve gone over this content,” says Zedalis. The teacher cannot simply turn students loose with the lab materials in a free-for-all and expect inquiry learning to happen on its own. Instead, Zedalis moves around the room asking probing questions on how the students are doing their labs.

For example, before all the big concepts and biotechnologies come into play, there’s the prosaic matter of correctly labeling bacterial growth plates. Zedalis approaches a table where the students have almost finished the day’s work.

“How have you labeled your plates?” she asks.

“Is that what those two lines mean?” asks Zedalis. “What do you think might be a more effective way to label these plates? What are these labeled?” Zedalis points to the vials containing E. coli and E. coli plus plasmid.

“Plus and minus,” says the student.

“How do I know which [plate] gets the plus and which the minus?” asks Zedalis.

“I could label the plates [with those signs],” says the student, adding a plus to the two experimental plates and a minus to the two control plates.

While almost directing the students on how to label her plates, Zedalis is still asking questions, albeit leading ones. “There are many different levels of inquiry,” she observes. “And at this level it’s student-directed but teacher-guided.” Before having them consider larger questions, she offers students many small ones. This helps them improve their lab skills but also begin to think about why details like the labels on plates matter. 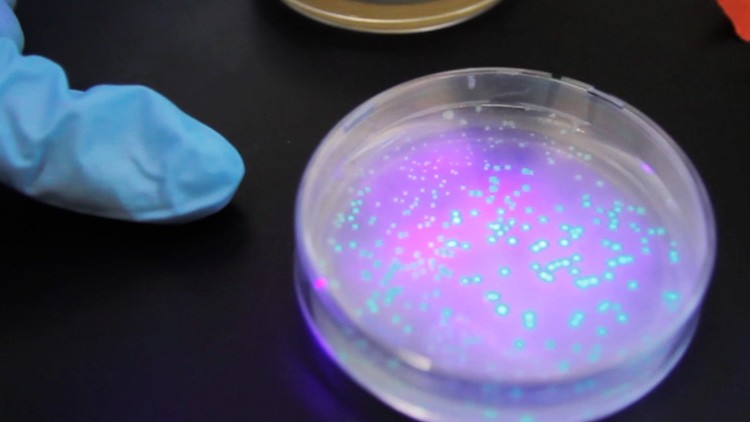 Transformation! The glowing green E. coli colonies signal that the bacteria have taken up the plasmids containing GFP, a modified jellyfish gene, as well as two other genes.

The next day, the students retrieve their plates from the incubator. Shining a UV light on their plates, students immediately see if their transformation experiment worked. Glowing green dots on the experimental plates indicate not only that the E. coli are expressing green fluorescent protein, but that they have become resistant to ampicillin. The control plates, where bacteria did not receive the ampicillin resistance gene, show no growth.

The students count the transformed bacterial colonies without opening the plates, putting a dot for each colony on the plate using a marker. They calculate the transformation efficiency by dividing the number of colonies by the amount of DNA used, then each group writes their results side-by-side on the board.

“If I see them making a mistake with the calculation, I let it go,” Zedalis says. “Because part of inquiry is letting them self-correct.”

The process of how this self-correction works as the students write and compare their results is worth a closer look:

“What does that ‘e’ stand for?” Zedalis asks the first student. “What does this term mean? Can you write it in a different way?” As on the previous day, the questions partially guide the student.

The student realizes her error and changes “e3” to “X 103.” As she’s writing at the board, she asks, “Should we be using significant figures?” Zedalis nods and the student erases three decimal places.

As the first student is writing, another student asks, “Should we put units on the board?” The student and Zedalis agree on the units: transformed colonies per microgram of DNA. She writes the units next to her figure. Seeing the change, other students add their units to the table.

After checking their math, a student raises his hand. “I think my group forgot to multiply our density of DNA by the volume we actually added to the plates,” he says. As it turns out, each lab group made this mistake, so they re-do their math and rewrite their results: 1.7 X 103 transformants/ug DNA, 1.5 X 103 transformants/ug DNA, and so on. Their efficiencies are now within the predicted range, though still a respectable achievement for the first time conducting this procedure.

“I love conversations like this,” Zedalis says later. “They’re self-monitoring, they’re revising, refining, self-correcting.” While she still supports their efforts and guides them through the calculations, the students have begun to ask more questions on their own, as well as collaborate in sharing results. 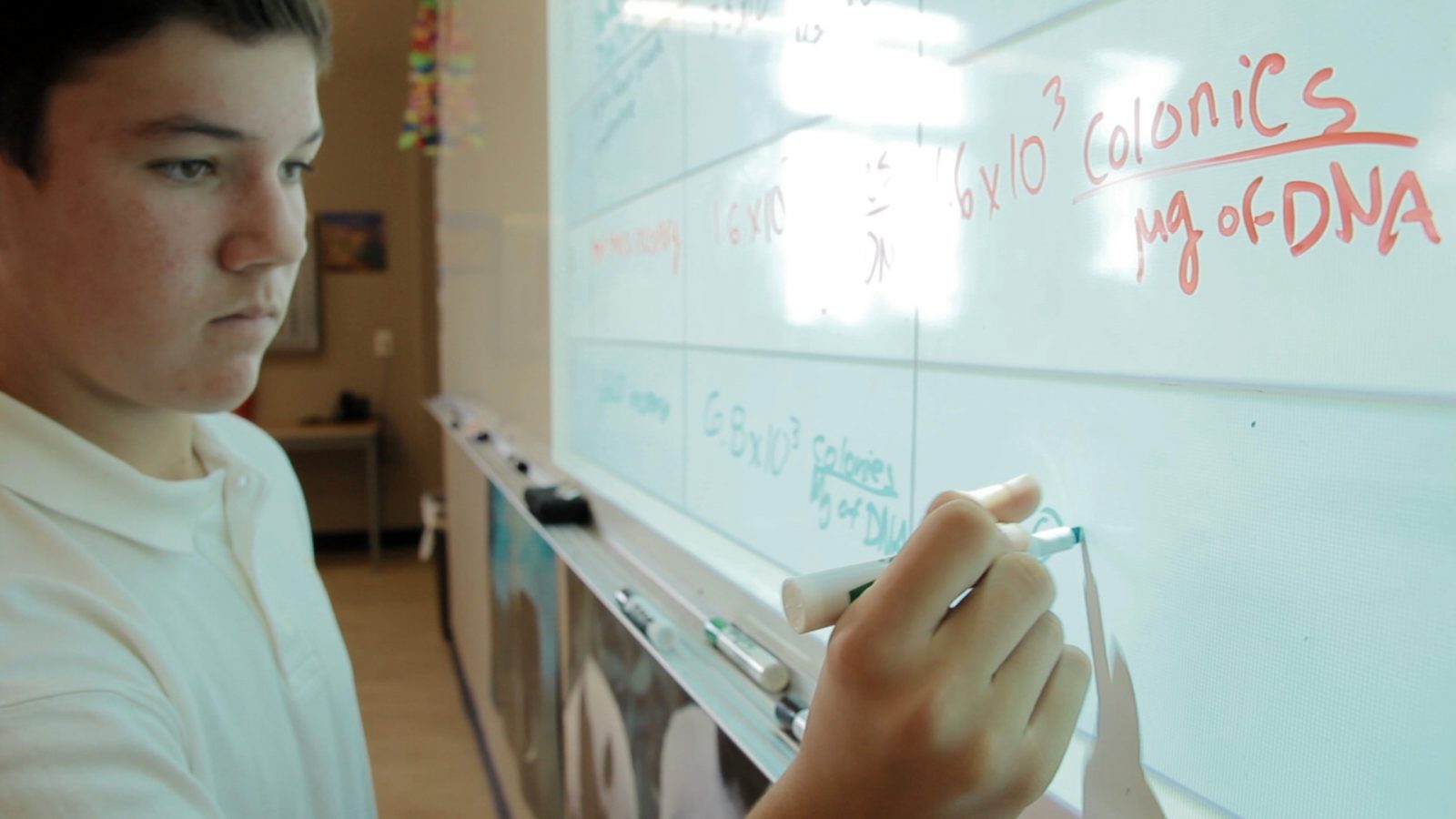 Zedalis has students share initial calculations at the front of the classroom as a way to spur discussion and comparison.

Now what would you change?

The next day of the investigation finds the students repeating the transformation lab. This time, however, each group chooses a variable—the amount of plasmids added, the duration of the heat shock, the amount of luria broth added, among others—and formulates a hypothesis on how changing their variable will increase or decrease transformation efficiency. Now familiar with the experiment, the students can bring in content they’ve learned as they give reasons for their hypotheses: that adding less positively charged calcium chloride will reduce efficiency because less negatively charged DNA will be neutralized; that a higher temperature for the heat shock will reduce efficiency by denaturing important enzymes, and so on.

The students run the transformation protocols again and return the next day to analyze their results. One lab group has reduced calcium chloride by half and gets a strange result. They find 164 colonies on the control plate (where the standard transformation protocol was run), and one glowing colony on the experimental plate. Also on the experimental plate, they find one non-glowing colony far to the side. How could that happen? 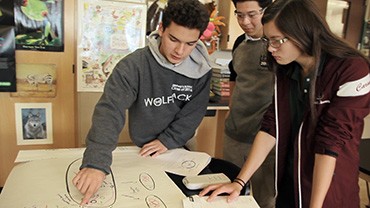 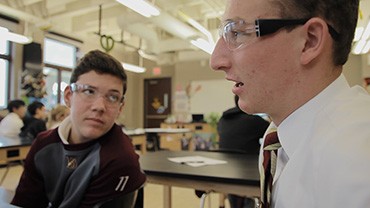 Left: a student uses his diagram to discuss which variable in the procedure to change for the group’s independent investigation. Right: Students make predictions about what will result by doubling the amount of Luria broth in the experiment.

“It’s definitely not glowing,” says the student of the unexpected colony.

“You know what you could do, if you wanted to take the time,” says Zedalis. “You could put the plate back in the incubator, let it keep growing, and you’ll get what’s called satellite colonies. It would be interesting to see if the satellite colonies…”

“Grow,” a student finishes her sentence.

Then another student speaks up: “What if you don’t get a lot of transformation, like in this experiment? Can you do anything to improve it at this point?”

This sparks a conversation on how to test the amount of transformation that’s occurred with further incubation, as well as a broader, thematic conversation on transformation in nature, and how the genetic variation it produces is beneficial to organisms. A strange result that might have simply been “wrong” in a more traditional classroom lab becomes an occasion for questioning and learning. 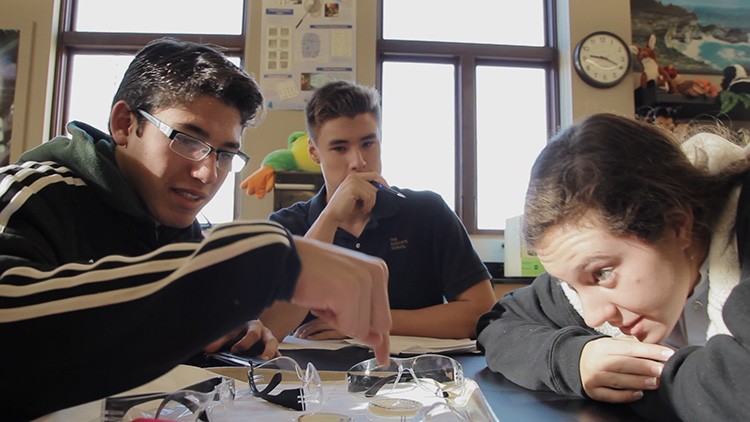 Over the course of this four-day investigation, these three interactions point to how inquiry-based learning develops among students. At first, the teacher supports them closely, prodding them to answer basic questions, one step away from directing them.

However, on subsequent days, the shift towards student-directed learning occurs by degrees. The students begin to work among themselves in analyzing their results and, though the teacher still guides them at points, they gain independence in formulating and correcting their calculations. By the fourth day, they are conversant enough in the basics of transformation and in the lab protocol to begin proposing new investigations, questioning unexpected results, and relating their lab experiences to broader concepts such as genetic variation. This reveals inquiry-based learning to be a progression, a shift, and a process carefully supported by teachers, resulting in questions that show a deepened understanding of science concepts and practices.

AP is a registered trademark of the College Board.