Discovery Days at World Series HQ, Mini Makers, and More: The Bio-Rad Science Ambassador Program in 2014 and Beyond

The Bio-Rad Science Ambassador program is now finishing its second full year as one of Bio-Rad’s corporate social responsibility initiatives. The program’s goal is to foster the next generation of scientists and science leaders by bringing together working scientists, students, and educators for an exciting hands-on science lab experience. This year saw the program reach a full 7,641 young participants in the United States and Canada, with 15,042 students taking part since the program began. As scientists and teachers from coast to coast signed up to conduct classroom events, 2014 also found the program branching out to new venues—expos, Maker Faires, and the like.

It’s been two years and we’re just getting started. Find out about some recent happenings from fall 2014, as well as the exciting things 2015 holds for the Science Ambassador program, and learn more about how you can participate in inspiring young minds with science!

The San Francisco Giants had clinched the 2014 World Series just days earlier in Kansas City, and on November 1–2 thousands of children, parents, and other science fans flooded onto the team’s home field, AT&T Park, for Discovery Days, the area’s largest science event. Aptly located near home plate, right next to the Series trophy on display, Bio-Rad’s Science Ambassador tent featured volunteer scientists running the Genes in Bottle™ DNA extraction lab for a line of participants that stretched well out toward third base.

“It was fun,” said one young participant, who held up the clear amulet containing her genetic material and added, “And now I have my own DNA … outside of my body!”

“When I was growing up in school, you’re sitting there, your teacher is up at the front of the classroom telling you science,” reflected one of the scientists at the booth. “Here these kids are seeing DNA for the first time. It’s no longer just three letters. They actually get to see what we’re talking about.” 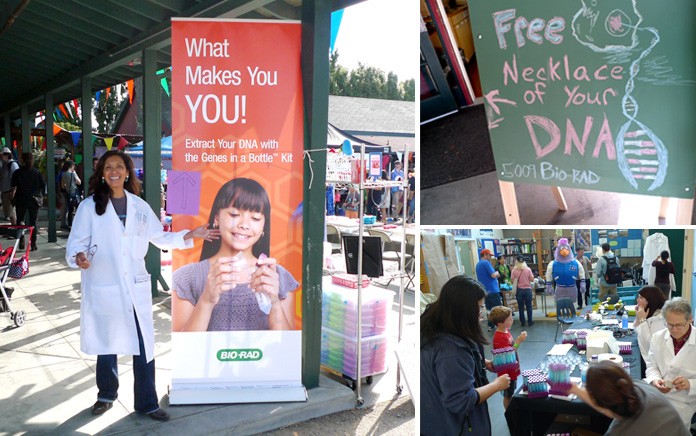 Bio-Rad’s Michelle Delgado (left) greets makers at the Mini Makers Faire, which brought together a wide range of people, organizations, and companies to celebrate and explore science, engineering, and art.

Nothing says “DIY” like extracting your own DNA, and that’s just what 275 young inventors, hackers, and innovators did at Bio-Rad’s Science Ambassador booth at the East Bay Mini Maker Faire in late October. The fair in Oakland sprawled across the Park Day School grounds as well as the Studio One arts center next door. Representing biotech and life science alongside the robots, crafters, homebrewers, and other technical thingamajigs that make up the Maker movement, Bio-Rad was right at home in a building dubbed “The Nerd Nest” for the one-day event. Make on!

In Callac, a small town in northwest France, geneticist and food scientist André Quintanar returned to his junior high school and conducted the Bio-Rad Genes in a Bottle lab. Local paper Le Télégramme reported that the ninth-grade students were “captivated” by the lab and asked many questions afterwards about life as a scientist. Bon travail, M. Quintanar! 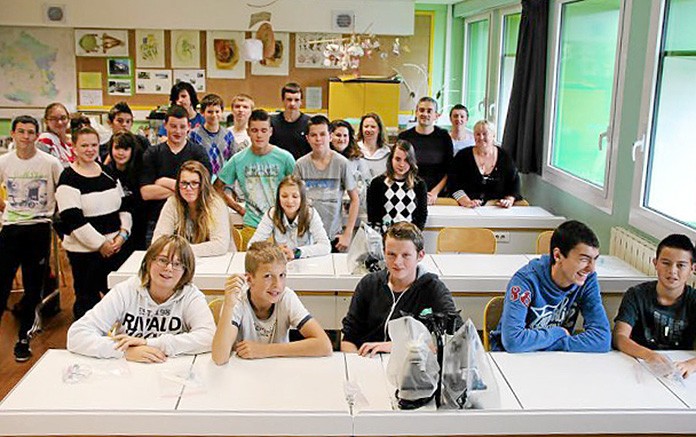 Then, at the Beijing Science Fair, held in the famous National Stadium from the 2008 Olympics, more than 100 students completed the DNA extraction lab while representatives from schools across China expressed interest in learning more about Bio-Rad. Beijing TV, the major local station, featured the activity in their coverage of the Fair. Xie xie (谢谢)!

Beijing TV featured Bio-Rad’s booth and the Genes in a Bottle extraction experiment in its coverage of the Beijing Science Festival, including interviewing this student about the experience (left), displaying her experiment (middle), and showing her donning her DNA necklace (right).

The coming year is an exciting one for the Science Ambassador program. We expect a robust number of classroom events across the United States and Canada, and look forward to exploring events in new regions. We’re also happy to be participating in such upcoming events such as school science fairs, Discovery Days, and Maker Faires in 2015. 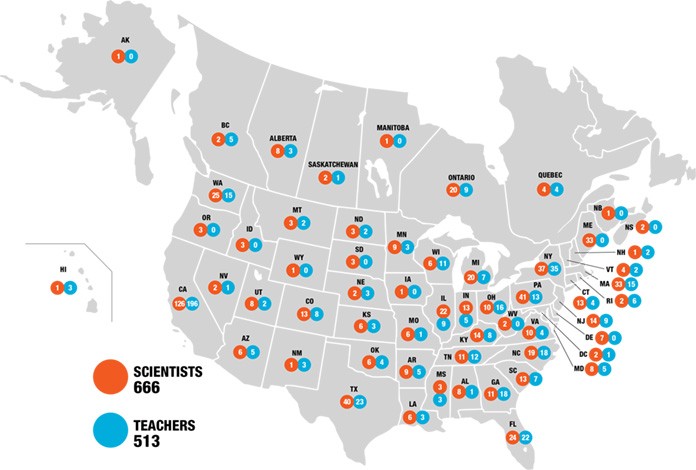 The map showing sign-ups for the Bio-Rad Science Ambassador Program reveals significant growth since 2013, with robust participation across the U.S. and Canada.

Here’s what just a few of our many volunteer scientists are saying about why they’re joining the Science Ambassador program:

Maker Faire is a trademark of O’Reilly Media, Inc.