In this second part of our four-part series on cell health we review pathways and stages of apoptosis, discuss key differences between apoptosis and necrosis, and describe methods for detecting apoptotic cells, including the advantages and pitfalls of these assays. 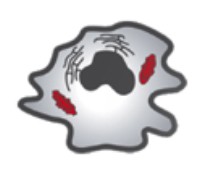 Apoptosis, or programmed cell death, is a highly regulated way for an organism to selectively eliminate cells. This process plays an important role in embryogenesis, maintaining an organism’s size, and eliminating damaged or aberrant cells. The importance of apoptosis in human health is underscored by the many diseases resulting from aberrant apoptosis. Dysregulation of apoptosis has been linked to various cancers, neurological and cardiovascular disorders, and autoimmune diseases.

We commonly distinguish between two different types of apoptosis: the intrinsic pathway, mediated by mitochondria in response to internal stimuli such as DNA damage, and the extrinsic pathway, mediated by extracellular death receptors (for example, binding of FasL to the FasLG receptor) (Figure 1). Both pathways rely on proteases called initiator caspases that activate a cascade of effector caspases, leading to apoptosis. Crosstalk between the intrinsic and extrinsic pathways is mediated via BH-3 interacting domain death agonist (Bid).

The intrinsic pathway (Figure 1) is initiated by Bcl-2 homology proteins. In the classic apoptosis pathway the Bcl-2 proteins Bax and Bak are activated in response to internal stimuli such as DNA damage or oxidative stress. These two proteins subsequently interact with Bid and are inserted into the outer mitochondrial membrane. This results in what is considered the point of no return in apoptosis — mitochondrial outer membrane permeabilization (MOMP). MOMP leads to the release of pro-apoptotic factors such as cytochrome c into the cytoplasm. Cytochrome c in the cytoplasm binds APAF-1 and dATP to recruit pro-caspase- 9, forming the apoptosome. Apoptosome formation triggers cleavage of pro-caspase-9 into its active protease form, caspase-9. Caspase-9 is an initiator caspase that then activates downstream effector caspases, such as caspase-3 and -7, through proteolysis, triggering the caspase cascade that leads to apoptosis. 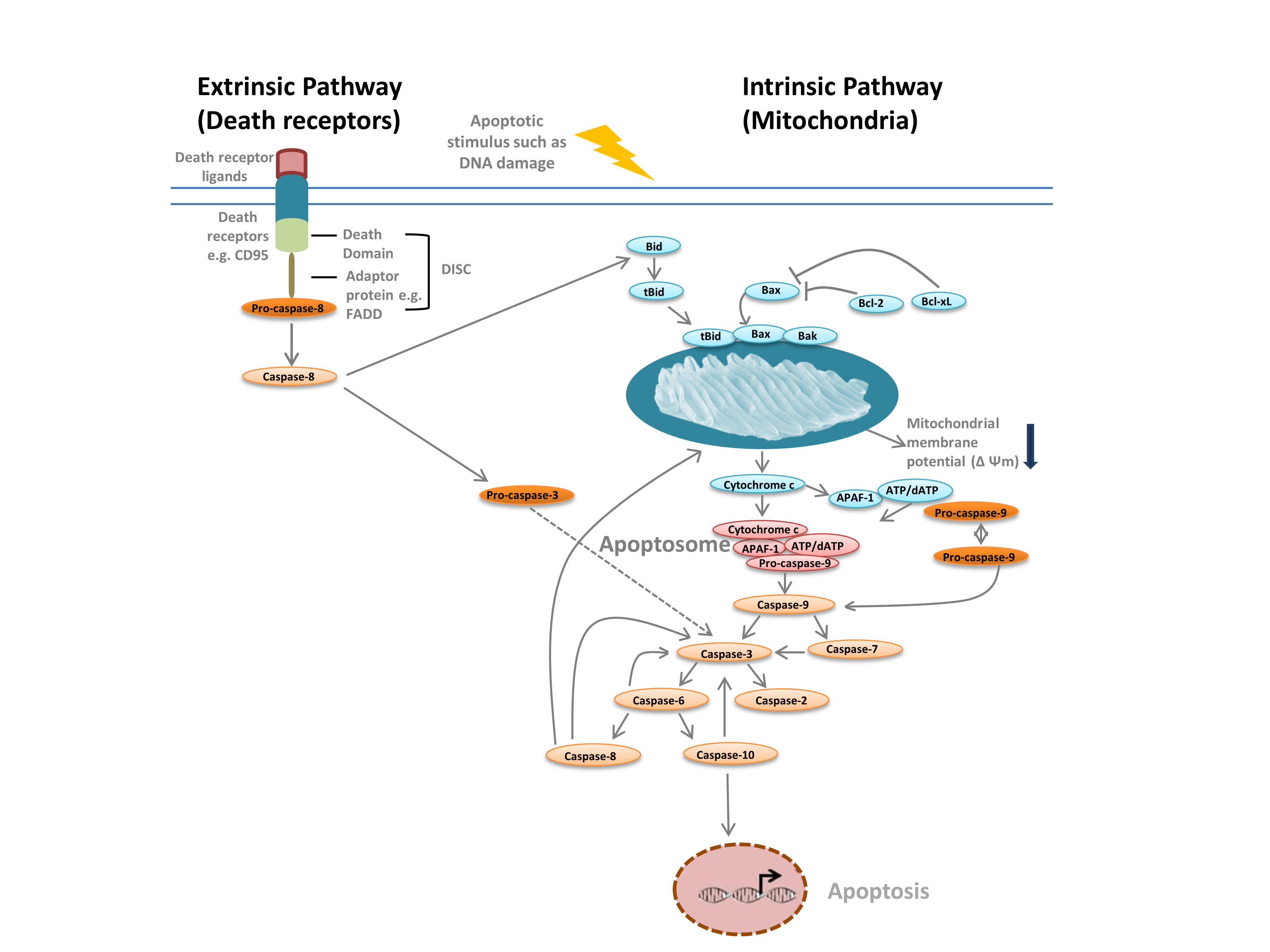 The extrinsic pathway is triggered by the binding of ligands to death receptors. Upon ligand binding, death receptors oligomerize and recruit adaptor proteins such as FADD. This enables recruitment of pro-caspase-8, the inactive form of initiator caspase-8, and formation of the death-inducing signaling complex (DISC). Pro-caspase-8 oligomerizes and is cleaved into its active form, caspase-8, which in turn cleaves and activates effector caspase-3. Caspase-3 in turn proteolytically activates various other caspases, thereby leading to apoptosis. In some cases activation of the extrinisic pathway can also lead to activation of the intrinsic pathway, mediated through Bid.

Apoptosis is distinct from unprogrammed cell death/necrosis. Necrosis is an unregulated process initiated by external damage and is different from apoptosis in several key ways (Table 1). However, as we have learned more about apoptosis and necrosis and have identified new mechanisms of cell death such as necroptosis, the lines between apoptosis and necrosis have become more blurred. The distinguishing features outlined in Table 1 are, however, still helpful guidelines.

Table 1. Features of apoptosis and necrosis.

It is useful to divide this process into stages when analyzing apoptosis:

When performing apoptosis assays it is always wise to include viability dyes such as propidium iodide (PI) to differentiate apoptotic cells from necrotic cells and to visually inspect cells or tissues under the microscope for key morphologic indicators of apoptosis.

Live cell time lapse imaging can be used to follow apoptosis in real time and is particularly useful for identifying membrane blebbing. For tissues, transmission electron microscopy can be used to identify many of the structural changes that accompany the stages of apoptosis. Tissues can also be stained with hematoxylin and eosin to visualize macrophages that have engulfed apoptotic cells. Acridine orange (AO) is another dye commonly used to visualize apoptotic cells. This popular viability and proliferation dye can be used to assess apoptosis because its emission spectra shifts to orange when in the acidic lysosome environment; this makes the dye useful for identifying engulfed apoptotic cells. DNA-binding dyes such as DAPI, Hoechst, propidium iodide (PI), and 7-AAD can be used to visualize nuclear blebbing while cell shrinkage can be detected either in a flow cytometer as a reduction in forward scatter (FSC) or visually using light microscopy.

Changes in membrane potential indicate that a cell has passed the point of no return and is now committed to apoptosis. A collapse of the mitochondrial membrane potential can be detected by flow cytometry or immunofluorescence using potentiometric dyes.

Tetramethylrhodamine ethyl ester (TMRE), Tetramethylrhodamine methyl ester (TMRM), and JC-1 are commonly used potentiometric dyes. TMRE and TMRM aggregate in the mitochondria of nonapoptotic cells and fluoresce bright orange or red. In apoptotic cells with reduced mitochondrial membrane potential these dyes are found throughout the cytoplasm in their monomeric form and show reduced red fluorescence. The dyes can be used in combination with fluorophore labeled inhibitor of caspase assays (FLICA) (see next section) to identify apoptotic cells based on two features: breakdown of mitochondrial membrane potential and caspase activation (Figure 2). 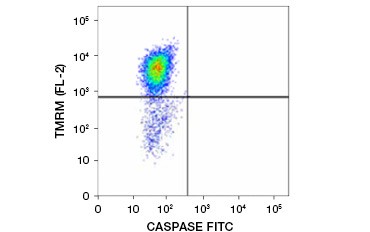 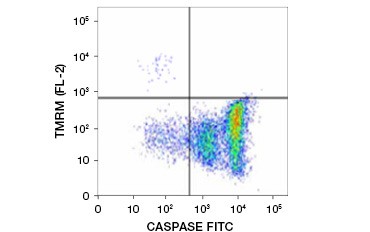 Caspase activation is a defining feature of apoptosis. Commonly assayed key apoptotic caspases are the initiator caspases 3, 6, and 7 and the effector caspases 2, 8, 9, and 10. Caspase activation can be identified either by the reduced size of pro-caspases as they are cleaved or by using antibodies that interact only with the cleaved, activated form (Figure 4). Both approaches can be read using western blotting while the latter approach can also be adapted for fluorescent and immunohistochemistry assays by choosing antibodies conjugated to fluorophores or biotin. These assays are compatible with both fixed and unfixed cells.

One thing that should be kept in mind is that initiator caspases are far upstream in the apoptosis signaling pathway and that their activation does not always result in apoptosis. It is thus wise to pair assays for initiator caspases with ones for effector caspases or, better yet, with probes for events downstream of the point of no return, such as MOMP.

Another class of caspase activation assays is fluorophore labeled caspase substrates, such as FLICA Assays. FLICA Assays bind covalently and irreversibly to activated caspases; any unbound inhibitor diffuses out of cells and/or can be removed with washes. These inhibitors are available fused to either red or green dyes. Fluorescence intensity can be used as a quantitative measure of caspase activity – apoptotic cells with high caspase activity will show more fluorescence than ones with low caspase activity. FLICA Assays are compatible with live cells, tissue sections, and thin frozen sections, but not with fixed cells or paraffin-embedded tissues and can be read by quantifying fluorescence intensity using fluorescence microscopy, flow cytometry (Figure 2), or a microplate reader.

To draw sound conclusions from caspase activity assays it is always wise to pick more than one target. 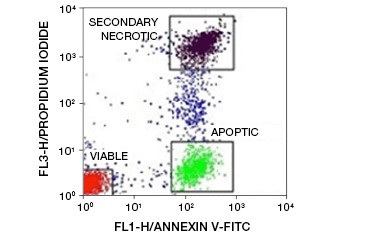 A key feature of apoptosis that is detectable even in early stages is externalization of phosphatidylserine (PS), a phospholipid found exclusively in the inner membrane in healthy cells. Annexin-V binds phosphatidylserine and annexin-V conjugates can thus be used to assess apoptosis. These assays are commonly carried out by flow cytometry using fluorophore-labeled annexin-V. By combining this dye with any viability dye, such as PI, apoptotic cells can be distinguished from necrotic cells. In these two-color flow cytometry experiments three populations are easily distinguishable: annexin-V/PI double-negative viable cells, annexin-V positive/PI negative apoptotic cells, and annexin-V/PI double-positive secondary necrotic cells
(Figure 5).

Phosphatidylserine externalization is a dynamic, reversible process until a cell is committed to apoptosis after MOMP. Using annexin-V conjugates it is impossible to distinguish early, reversible stages of apoptosis from the later stages of apoptosis when a cell is committed to death. Polarity-sensitive indicator of viability and apoptosis (pSIVA) probes are biosensors that reversibly bind PS and thus turn on and off as PS flips from the outer membrane to the inner membrane (Figure 6). Another advantage of the pSIVA Assay is that, unlike annexin-V conjugates, pSIVA Probes can be added directly to your cells without washing steps. This assay can be read using immunocytochemistry and immunofluorescence microscopy, including live cell imaging, which allows easy comparison of differences in apoptosis rates in response to different experimental treatments in real time. Since apoptosis is being monitored in real time, this assay is not compatible with fixed cells.

DNA fragmentation is one of the later stages of apoptosis and is commonly analyzed by detection of DNA laddering using agarose-based electrophoresis or the terminal deoxynucleotidyl transferase dUTP nick end labeling (TUNEL) method.

A defining characteristic of apoptosis is fragmentation of DNA into ~180 bp fragments by caspase-activated endonucleases. Extracted genomic DNA run on an agarose gel will thus show characteristic DNA laddering not seen in cells dying by other mechanisms, such as necrosis.

The TUNEL method is another way of detecting oligonucleosome creation by caspase-activated endonuclease. DNA cleavage results in 3′ hydroxyl groups (3′-OH groups). The TUNEL assay uses the enzyme terminal deoxynucleotidyl transferase (TdT) to add BrdU to these 3′-OH groups. Incorporated BrdU can then be detected using anti-BrdU antibodies labeled with biotin or a fluorophore. This assay is compatible with flow cytometry, as well as immunohistochemistry and immunofluorescence, and can be converted into a radiolabel readout by using [3H]-TdR instead of BrdU. Cells need to be fixed after BrdU incorporation prior to staining.

DNA fragmentation can also be measured by flow cytometry using the sub-G1 assay. The small, ~180 bp, DNA fragments generated during apoptosis leak out of cells, decreasing the total DNA content of apoptotic cells. By staining DNA with PI, hypodiploid apoptotic cells can be counted in the sub-G1 peak of the PI histogram.

Finally, many vendors sell panels for multiplex immunoassay analysis of cell populations. These panels can assay multiple apoptosis markers at once.

Regardless of the method used to detect apoptosis, appropriate controls must be included, as experimental conditions and cell type can alter the performance of some assays. Always include positive and negative controls. Include vehicle-treated controls to account for effects of the solvents, application-specific controls to control for factors such as autofluorescence in immunofluorescence experiments, and loading controls for western blotting.

Table 2. Summary of assays for detecting hallmarks of apoptosis.