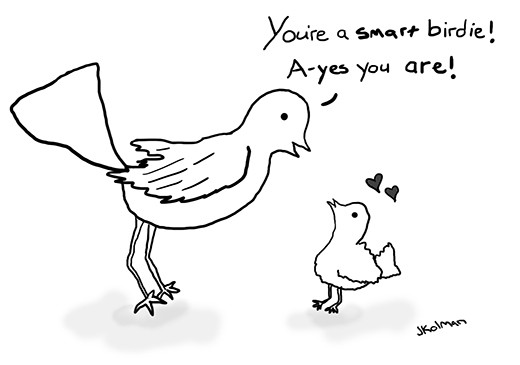 Baby songbirds learn their songs more quickly if their adult-bird teachers use baby talk, says research from Jon Sakata and colleagues at McGill University. Baby zebra finches learned songs significantly faster when taught by adult birds, as opposed to recordings of birds, and the team found that the reason was that real birds altered their songs in ways similar to human adults talking to small children, slowing and repeating phrases.

Additionally, the doted-upon, fast-learning hatchlings had higher brain levels of dopamine and norepinephrine, suggesting a link between these chemicals – often associated with feelings of happiness – and ability to learn language. The researchers also reported that the young birds paid more attention to the baby-talk songs than to normal songs, and this also enhanced learning.

This result joins a multitude of recent findings placing birds’ cognitive ability on par with or higher than that of primates. In addition to effective song pedagogy, avian mental skills include tool-making, causal understanding, future planning, self recognition, attribution of mental states to others, acknowledgment of conspecific deaths, and remembering the locations and ages of hundreds of food caches. Researchers wondered how all this is accomplished with brains that are proportionally tiny compared with mammal brains, but a new study from a team lead by Suzana Herculano-Houzel of Vanderbilt University indicates that the answer lies in the number and distribution of neurons. Possibly in an evolutionary response to the need to keep their cargo light in order to achieve liftoff, the world’s feathered fliers appear to have much more densely-packed neurons, especially in the forebrain, where complex information is processed.

Source: Proceedings of the National Academy of Sciences

Using the Air Sensor on the NGC™ Chromatography System