Do Lizards Dream of Scaly Sheep? 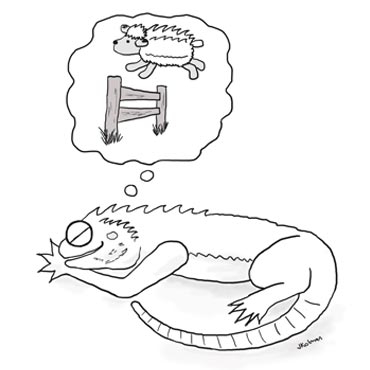 If you rouse a sleeping dragon, you might be interrupting its dreams. Or at least that’s the suggestion from recent studies at the Max Planck Institute for Brain Research. A team led by Gilles Laurent set out to learn how the Australian dragon (Pogona vitticeps) responds to visual information, but continuous monitoring of brain activity with electrodes revealed other intriguing data. When sleeping, the reptiles’ brains emitted alternating patterns that resembled the switching between slow-wave deep sleep and rapid eye movement (REM) observed in birds and mammals, including humans. The alternation in reptile brains was quicker and more regular than in birds and mammals, but otherwise comparable. The team made additional observations that bolstered their suspicion that the lizards were experiencing REM, and they discovered additional similarities to mammal and bird sleep, such as coordination between regions of the brain.

During slow-wave sleep, a state thought to be involved in storing memories, brain activity is low; during REM, a state characterized by eyes darting under their lids, brain activity spikes and produces dreams. This dreaming state was previously thought to have developed after birds and mammals branched from reptiles in evolutionary history. The discovery of REM in Australian dragons, who branched even before the appearance of dinosaurs, indicates that dreaming existed in a common ancestor some 320 million years ago on the single landmass known as Pangea.

What the dragons are dreaming about is anybody’s guess. But next time you seem to find yourself immersed in the angst of losing your teeth or accidentally wearing your pajamas to school, you may be experiencing an animal trait older than your continent.

Are You Vegetarian? Could Be Something in Your Genes