Ravens Get Inside Each Other’s Heads 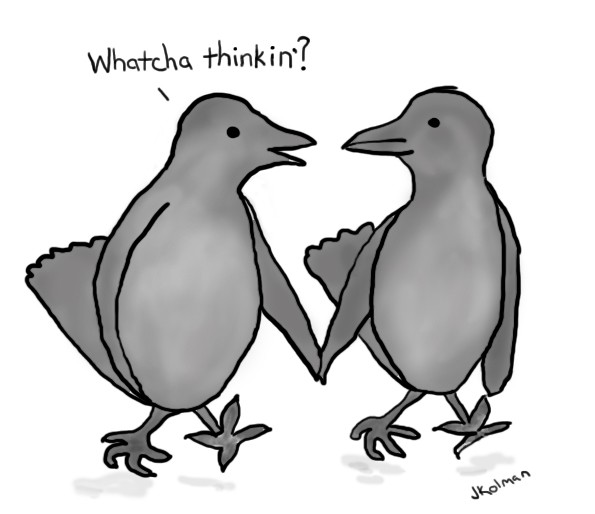 New research suggests that ravens understand that others have minds. Theory of mind, the ability to attribute perceptions and mental states to others, either like or different from one’s own, has previously been assumed to be the domain of humans only.

Research asking whether the ability is unique to us typically involves close relatives such as chimpanzees, though more distantly related species such as squirrels have been noted in studies to practice deceptive food stashing if they think they are being watched: a squirrel may feign burying a stash of food when another squirrel is nearby, then hide its real stash later when it’s alone. But with both squirrels and chimps, researchers have suggested that the animals are reacting to the watching behaviors — so-called gaze cues — of the others and not necessarily concluding that the other is plotting a snack raid. Scrub jays too have been observed to conceal their cache from the sight of others and to not visit buried caches when other jays are present.

The new research on ravens (Corvus corax) removes the gaze cue factor by testing whether the ravens would alter their behavior in the presence of a peephole and only the sounds of other ravens. A team of researchers from the University of Houston and the University of Vienna put ravens in a windowed room and observed caching behavior both when ravens were clearly visible through the window and when no conspecifics were present. The researchers then taught the birds how to watch humans caching food in the adjacent room by using a peephole.

Once the ravens understood the use of the peephole, and that it could be closed or opened, the researchers observed food-caching behavior in different scenarios. When the peephole was open and sounds of other ravens were played on speakers next door, the ravens exhibited caching behavior that matched that of when other ravens were clearly visible.

The behavior indicates the ravens know not only that their fellows are prone to spying and theft, but that they share the experience of seeing. This places ravens’ possession of theory of mind higher than any nonhuman animal yet studied. The authors suggest the peephole design could be useful in determining which other species have the ability and at what age humans develop it.