Birds of a Feather Flock According to Weather? 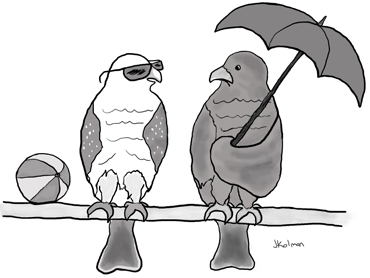 Polymorphic animals are those that have distinctly different outward traits, such as a color, within a species. Black sparrowhawks (Accipiter melanoleucus), despite their common name, exist in a version with a white front as well as an all-dark version. But why would evolution simultaneously favor such contrasting color variations within the species?

A team led by Gareth Tate at the Percy Fitzpatrick Institute of African Ornithology looked into this question and concluded that it may be because of the weather. They found that the distribution of bird colors within the species’ South African range corresponds with the typical sunlight levels in different areas, especially during breeding seasons. In areas that tend toward bright sunny weather during breeding season, the light morph predominates. Areas with heavier rainfall during breeding are home to a larger number of dark sparrowhawks. The team concludes that the color value of the birds lends a predatory advantage if it offers more effective crypsis — the ability to avoid detection via camouflage. White birds are harder for prey to see against bright prevailing skies, and dark birds hunt undetected under cloudy skies. Thus they have an edge in providing for the hungry mouths awaiting them back at the nest.