Until a few years ago, a person with metastatic melanoma — the deadliest form of skin cancer in its deadliest stage, spreading throughout the body — would face the prospect of having less than a year to live. The prognosis with standard chemotherapy treatment for such a case is about 6 to 8 months.

That dire outlook changed for many people with melanoma in late 2011, as the FDA began approving a new generation of molecular therapies, including vemurafenib (marketed as Zelboraf) and dabrafenib (marketed as Tafinlar). These drugs target the mutated form of the BRAF protein (i.e., V600E) that is expressed in tumors of about 50% of melanoma patients. Clinical trial results for these new BRAF inhibitors were dramatic; response rates among patients were very high, and in many cases physicians reported tumors simply “melted away.” Results like these encapsulate the promise of today’s highly targeted molecular therapies.

Cancers like melanoma, however, are tenacious in their progression. Even as the BRAF inhibitors block one pathway mechanism, a network of alternate cellular mechanisms begins rerouting tumor growth. So far, all but a very few melanoma patients treated with BRAF inhibitors have developed drug resistance and seen their cancers return. The next step in treatment lies in combination therapies, drug “cocktails” similar to those used to manage HIV infection. The result in cancer treatment in the long term, researchers hope, could be similar to what’s occurred with HIV: changing the illness’s status from a death sentence to a chronic but manageable disease.

However, to make these new cancer therapies work requires more than effective drugs targeting multiple pathways since each patient has a unique profile of oncogenes and other factors driving tumor growth, as well as the potential to respond differently to different drugs. If developing highly targeted therapies is one key element of personalized medicine, the other is being able to target these treatments in individual patients. This is where a small startup in Maryland, BioMarker Strategies, enters the picture.

“Most molecular drugs today are co-approved with a companion diagnostic,” notes Greg Bertenshaw, vice president of R&D at BioMarker Strategies. “But the problem with currently available tests is that they’re not direct measurements of whether a therapy is going to work. Current tests don’t look at downstream effects, so they’re indirect measurements. For instance, patients who have become resistant to BRAF inhibitors continue to express the mutated form of the protein. Therefore, these patients would still be considered test-positive.” The concept BioMarker Strategies seeks to develop, a functional profile, stems from the need for a more complex and dynamic picture of tumor signaling pathways and drug response. Or, as Bertenshaw describes it, “We’re interested in measuring responses of very important proteins within key signaling pathways upon exposure to therapeutic drugs – this is what we call functional profiling.” 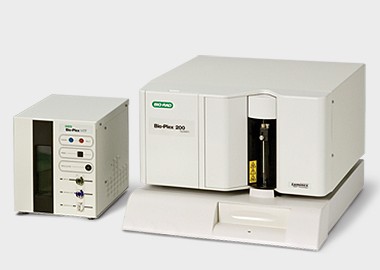 The SnapPath instrument being developed by BioMarker Strategies automates the process of preparing a live tumor sample and testing its dynamic response to multiple therapies at once. In analyzing the complex results of this process, the Bio-Plex multiplex immunoassay system proved a key solution for measuring phosphoprotein levels in pathways of interest.

With these functional profiles, BioMarker Strategies seeks to create maps of cellular responses — they term their individual profiles “PathMap profiles” — that will chart the effects of any drug or combination of drugs on a patient’s cancer. The key in producing these PathMap profiles lies in using ex vivo biomarkers. In other words working with live cells taken from a tumor sample, rather than the standard formalin fixed paraffin embedded (FFPE) sample preparation method that’s been in use since the 19th century.

“Oncology is changing very rapidly,” says Bertenshaw. “We believe the old approaches for measuring static biomarkers in samples aren’t really capable of capturing the information required to deal with these new, complex therapies.”

Working with live cells offers a chance to test drug response in a dynamic context, using actual tumor cells to get information on how an individual’s signaling pathways behave. What Bertenshaw and his colleagues hope to do is create a standardized, streamlined system for preparing these samples and deriving actionable data from them.

The company’s SnapPath instrument automates and standardizes the process. The tissue suspension taken from a solid tumor biopsy, such as a core biopsy or fine needle aspirate, is the input. The system then disperses the tissue and concentrates tumor cells through immunodepletion of nontumor cells. The concentrated sample is distributed among different wells, which are then treated with either drugs or growth factors, with one well serving as the control. In the final part of the workflow, the instrument lyses the cells to stabilize the newly evoked ex vivo biomarkers for further analysis. What alternate pathway mechanisms are activating as a result of treatment with BRAF inhibitors? Has resistance developed? What combination treatments will be most effective? These are the types of questions researchers at BioMarker Strategies plan to pose and answer, using the SnapPath system, in melanoma and other solid tumors, including breast, colon, lung, and pancreatic cancers.

However, to get detailed data about complex signaling pathway responses, the researchers needed a reliable way to analyze phosphoprotein levels in the cell lysates. This proved very challenging to achieve.

“We assessed many technologies and Bio-Plex assays yielded data we could actually use, primarily because the sensitivity was higher than competitor assays,” Bertenshaw says. “Other comparable technologies we tested also suffered from issues like (lack of) specificity and terrible background problems.”

Bio-Rad’s Bio-Plex multiplex immunoassay system, built with Luminex xMAP technology, uses bead-based immunoassays to enable highly multiplexed analysis of samples. Coupling antibodies to colored fluorescent beads gives each antibody a unique signal; multiple bound antibodies can be detected and quantified in a single sample well, allowing for the analysis of up to 500 analytes at a time.

Bio-Plex assay workflow. Color-coded capture beads are incubated with the sample (serum, plasma, cell lysates, etc.), followed by incubations with detection antibodies and a reporter dye. The Bio-Plex reader classifies the beads by color, then quantifies the associated reporter signal intensity, which indicates the level of target present.

“Where multiplexing becomes really important is when you have very precious or very scant samples,” says Bertenshaw. “Our samples are actually both precious and scant. You can end up with as few as 50,000 tumor cells in a sample, depending on the size and accessibility of the tumor. It’s nearly impossible to run multiple assays with a sample like that. Multiplexing is the only way to address these issues.”

BioMarker Strategies has started to place SnapPath instruments at research institutions to develop the technology in melanoma and other solid tumors. In addition, BioMarker Strategies recently published a study demonstrating that the SnapPath system can accurately assess treatment response to a BRAF inhibitor in both cell models and clinical tumor samples.1 The utility of getting a multidimensional look at signaling pathway responses was reinforced when the FDA recently approved the first combination molecular therapy for late-stage melanoma: a BRAF inhibitor in combination with a MEK inhibitor.

Functional signaling profiles of melanoma cell lines. This plot shows percent p-ERK inhibition relative to control in 14 melanoma cell line samples exposed to a BRAF inhibitor. Samples were passed through the SnapPath instrument to initiate signal transduction. Levels of p-ERK were analyzed using the Bio-Plex multiplex immunoassay system. The cell lines resistant to BRAF are shown as shaded blue bars. The line at 66% indicates the cutoff values for cell lines to be classified as sensitive to BRAF inhibition. Results indicate different possible treatment options, such as BRAF inhibitor alone or BRAF inhibitor with another inhibitor in a combination therapy. Such dissection of treatment options is possible because of the sensitivity of the measurements obtained.

“The new standard of care is going to be combination therapies,” says Bertenshaw. “We’re working to identify new targets for analysis, and the Bio-Plex group is helping us develop the assays for those targets. As oncology changes, we’re going to have to keep up with it. The flexibility of multiplexing is very important for doing that.”

Having this flexibility in measuring complex, dynamic treatment responses in cell signaling pathways opens the door to several applications. Bertenshaw envisions researchers using the SnapPath instrument to get more dynamic data on basic signaling mechanisms. Drug developers would also be able to use the system to model response when testing different compounds. Ultimately, Bertenshaw and his colleagues believe the system will one day reside in hospital oncology and pathology departments, allowing physicians to efficiently create a unique treatment profile based on patient’s unique cellular response. Such a technology, enabled by the flexibility and accuracy of Bio-Plex multiplex analysis, would be a major step toward the long-held goal of personalized medicine.

SnapPath is a trademark of BioMarker Strategies, LLC. xMAP and Luminex are trademarks of the Luminex Corporation.