The Promise and Challenges of CAR-T Cell Therapy

Unlike conventional cancer treatments, CAR-T cell therapy utilizes a patient’s own cells. After harvesting and expanding a population of T-cells from the patient, the cells are reprogrammed to express a CAR targeting cancer cells. Only two commercial CAR-T cell therapies have been approved in the U.S., both targeting treatment-resistant blood cancers. Extension of CAR-T cell therapy to other types of cancer, including solid tumors, is a quickly expanding area of research. But clinical-scale production of viable CAR-T cells under full GMP compliance is challenging. Expression of the CAR is typically achieved by viral transduction. Though effective, this method introduces contamination risks and immune responses, and it may be both costly and time-consuming. Researchers are increasingly interested in alternative solutions. 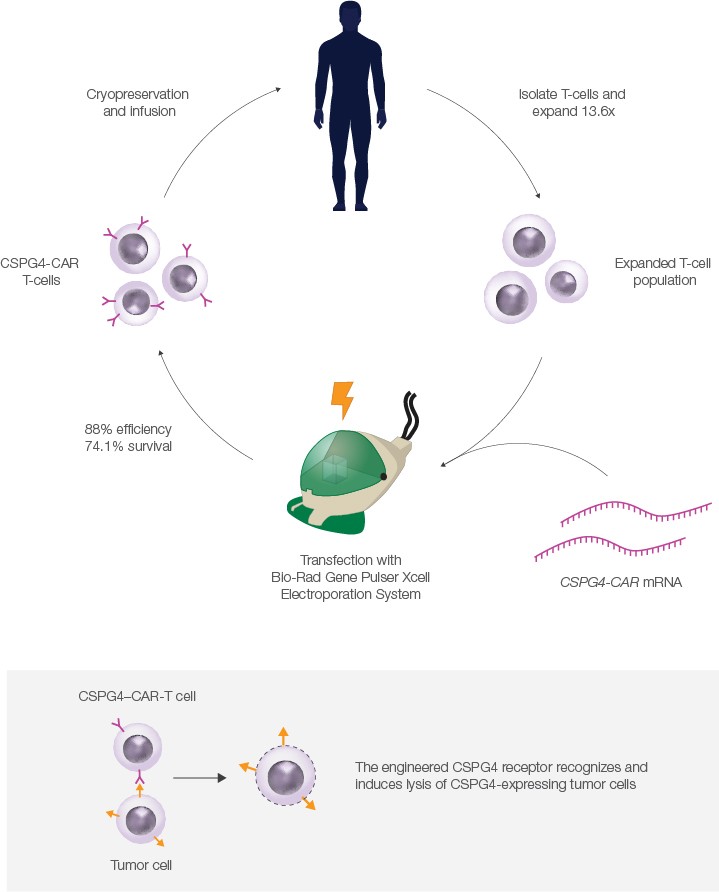 In 2014, a study published in Cancer Immunology, Immunotherapy described a new protocol for generating CAR-T cells under full GMP compliance. In addition to optimizations made to T-cell isolation and expansion methods, the authors utilized mRNA electroporation, rather than viral transduction, to achieve expression of the CAR. Use of mRNA transfection reduces the potential for viral contamination, is less time- and resource-intensive, and results in only transient expression of the CAR, which may reduce the risk for off-target effects.

In 2019, the group published data showing that CAR-T cells targeting melanomas could be produced at clinical scale under full GMP compliance using this protocol. Using a Bio-Rad Gene Pulser Xcell Electroporation System, the authors electroporated expanded T-cells with mRNA that encoded a CAR targeting CSPG4, a surface protein expressed on most melanoma and some other cancer cells.

To test the CSPG4–CAR-T cells, the authors incubated them with a CSPG4-producing melanoma cell line. Remarkably, they found that using high doses of CAR-T cells induced >80% lysis of melanoma cells after 20 hours. The authors plan to expand their study to a full clinical trial in the future.

Successful GMP-compliant production of CAR-T cells at clinical scale was facilitated in part by the Gene Pulser Xcell System, a modular electroporator for transfection of eukaryotic and prokaryotic cells. T-cells are sensitive and can be difficult to transfect, but the authors found that an average of 84% of electroporated cells were successfully transfected using the Gene Pulser Xcell System. Post-electroporation, 74.1% of cells remained viable; of these, 84% survived cryopreservation. The high transfection efficiency and survival rate are critical, as large numbers of CAR-T cells are needed for clinical applications. 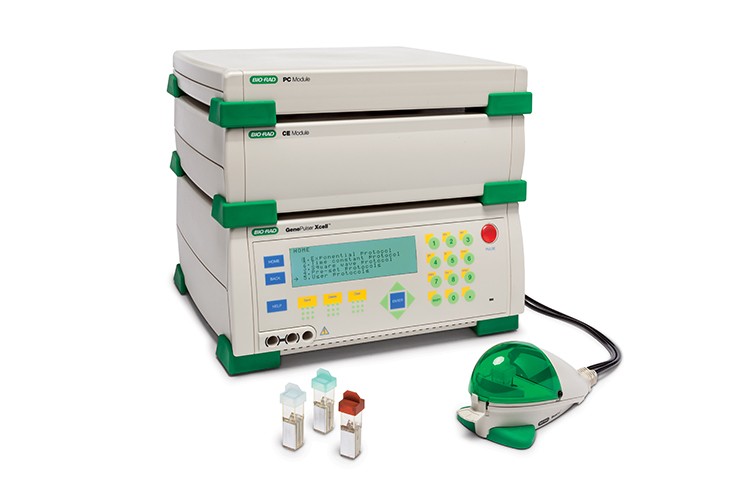 The Gene Pulser Xcell System is highly flexible and can be used even for cell types that are sensitive or difficult to transfect, such as T-cells. Users can select either exponential or square-wave pulses, depending on cell type and sensitivity, and can easily test a range of different voltages, in increments of their choosing.

The instrument also arrives with preset protocols for electroporation of nucleic acids, proteins, and other molecules into the most common cell types. Users can store up to 144 additional custom protocols, such as those available from Bio-Rad’s Transfection Protocol Library or from research publications. The wealth of existing protocols for the Gene Pulser Xcell Electroporation System allows users to spend their time on research rather than optimization.

Episode 5: Lab of the Future (LoTF)