Chemokines and Cytokines as Potential Markers for Personalizing Leukemia Treatment

Dr. Steven Kornblau has been on faculty at MD Anderson Cancer Center in Houston, Texas, for 20 years, where he divides his time between research into further understanding leukemia disease states, and a clinical practice where he treats a small number of patients with the disease.

Since his days as a medical student, Kornblau has been interested in identifying and characterizing the expression of different proteins in leukemias; one of his first fellowship projects involved studying a retinol blastoma protein. “We were able to find that it was abnormally expressed or abnormally phosphorylated in some patients and not expressed in others, and some of those patients did particularly poorly,” says Kornblau. This early research fostered a continued interest in profiling the impact of what’s happening at the protein level on functions such as apoptosis and cell cycle regulation. “I’m really a protein guy,” says Kornblau, “Proteins get phosphorylated, proteins get degraded — they’re where the rubber meets the road, what does the action within the cells.”

Developing ways to investigate large numbers of proteins simultaneously became a major objective and since the early 2000s, his lab has been using reverse phase protein arrays to accomplish this. “We’ve been able to look at a couple hundred different proteins in several hundred leukemia patient samples at a time,” says Kornblau. “Leukemic cells don’t live in isolation; they’re interacting with their environment within the bone marrow, they’re interacting with their environment in terms of the blood that flows by them.” A natural evolution of his research began to move toward discovering how the cytokines and chemokines that the leukemic cells might be getting exposed to also affect protein expression. The idea that researchers in his lab might find different cytokine and chemokine patterns or signatures within leukemic cells led to determining ways to expand their efforts beyond proteins and into profiling large numbers of cytokines.

We were surprised to see that the cytokine and chemokine profiles actually were prognostic on their own.”

Researchers in Kornblau’s lab considered using ELISA kits for the chemokine and cytokine studies, but determined that this approach would require a significant amount of sample, plus there was concern about the impact of batch effects on results. “We were looking for something where we could analyze a lot of cytokines and chemokines simultaneously that also wouldn’t require too much material,” says Kornblau. “Around that time we saw that Bio-Rad was creating large cytokine kits, where you could look at numerous chemokines and cytokines simultaneously.”

The lab used the Bio-Plex Pro™ human cytokine 27-plex assay to study a large panel of serum samples from acute myelogenous leukemia (AML) and myelodysplastic syndrome (MDS) patients (178 AML and 114 MDS samples). Because MDS is often considered to be “preleukemia,” one of the questions to be addressed was whether MDS and AML exhibit similar or unique cytokine patterns. “The first thing we found was that for both diseases, the pattern of expression was markedly different from the 19 normal controls that we had included,” says Kornblau. “The second thing we found was that for 24 of the 27 cytokines, there really wasn’t a difference between their expression in MDS and their expression in AML. They were very similar.” 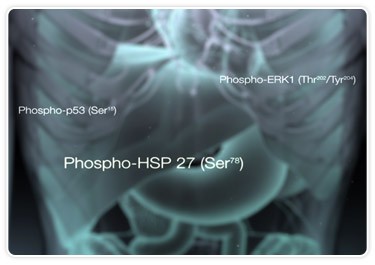 Recent research is uncovering cytokine, chemokine, and phosphoprotein signatures that seem to have the potential to help target treatments and therapies for diseases like leukemia.

Analysis of data generated in this study led to segregation of patient samples into eight different signatures (patterns of expression). Identification of these signatures led to their correlation to different clinical leukemic features such as cytogenetics, outcome, and remission duration. “We found to our surprise,” says Kornblau, “that there tended to be a good, an intermediate, and an unfavorable group of signatures. These were independent of other established clinical features like cytogenetics, like age, like having an antecedent hematological disorder. We were surprised to see that the cytokine and chemokine profiles actually were prognostic on their own.”

Kornblau explains that the results of this research set up the idea going forward that chemokine and cytokine patterns can be used to inform different therapies and enhance the ability of clinicians to affect leukemic cell growth or eliminate the resistance of those leukemic cells to different therapies already in use. “Knowing their prognosis has some value to a patient,” explains Kornblau. “It’s far better if you can use information to change the therapy so you don’t put patients on something that’s ineffective.”

There is a large initiative underway at MD Anderson to develop an institute for personalized cancer therapy. “To be able to personalize cancer therapy, though,” says Kornblau, “we have to first be able to identify the things that distinguish one patient from another, and then be able to do something with that information.” Biological markers such as cytokine and chemokine profiles seem useful in that if it’s possible to identify a biological marker that is relevant to the cell’s biology, then perhaps the marker can be interfered with to perturb the cell in a way that makes it more susceptible to therapy.

“Our work potentially suggests another avenue of approach that might allow you to personalize therapy,” says Kornblau, “since cytokines and chemokines are theoretically targetable.”

Multiplex Immunoassays in the Race for a COVID-19 Vaccine