“The first opportunity I had to lay my hand on a human heart I knew that was that — I knew that I wanted to know how the heart works, but more importantly, how it doesn’t work,” says Dr Francis Spinale, describing what inspired him when he was a PhD candidate to become not only an important researcher in the field of cardiac disease, but also a clinical practitioner to help treat patients with disease. This experience led the doctoral student to combine his PhD studies with those toward a medical degree, and it was during his first year in medical school that this initial inspiration turned to true passion.

“I did a rotation in pediatric cardiology, and that’s the first time I encountered children with life-threatening congenital heart defects,” says Spinale. “One evening, I was the unfortunate first-year student to watch an infant die of congenital heart disease. So there was the magic and amazement of watching the human heart work, and then there was the tragedy and unfairness of the fact that young lives are lost to heart disease before they even get the chance to do anything wrong.” So with these two juxtaposed influences, Spinale completed medical school with the purpose of gaining clinical knowledge and experience to go back to the research laboratory fully armed to understand the biological basis of cardiac disease.

In his current role as Professor of Cardiothoracic Surgery at Medical University of South Carolina, researchers under Spinale’s tutelage are channeling his drive to mitigate the devastating impact of childhood cardiac disease into understanding the pathways of inflammation. “We believe that one of the problems these young infants have is that there’s the presence of a significant inflammatory response, both due to their heart disease and also following cardiac surgery,” says Spinale. “So, the question we have is how does this inflammatory response contribute to the initiation of the development and progression of cardiovascular disease?”

Research findings indicate that in each of us there is an inherent balance between a pro- and anti-inflammatory cascade. In the presence of a foreign substance or tissue injury, the inflammatory response triggers appropriate wound repair mechanisms and fights against infection. For patients with or at risk for heart disease, however, once it’s triggered, this system can continue to run unchecked. It appears as though this cascade of pro-inflammatory markers then triggers a family of proteases — matrix metalloproteinases — which are enzymes that degrade the heart muscle and cause the heart to dilate and fail. “We’ve now found that these are the proteases that are active in children with congenital heart defects,” says Spinale, “and it may be that these proteases are turned on and not appropriately turned off and, for example, could facilitate the formation of a hole in a child’s heart, a very common congenital defect.” 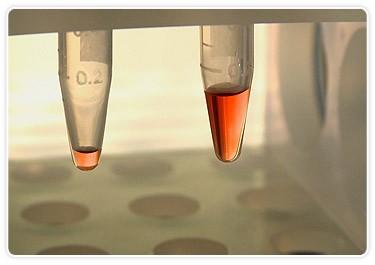 Bio-Plex system requires only 10 µl of plasma (left) to measure up to 22 analytes in a single well vs. 100 µl (right) required to conduct ELISA-based measurements of only one analyte per well.

Among the fundamental challenges facing the Spinale lab is translating this type of basic research into clinically relevant measurements that further patient understanding. Sample size is limiting and it takes an enormous amount of time to conduct the assays. One of the solutions they’ve employed to address this challenge is the acquisition of the Bio-Plex multiplex suspension array system. Spinale’s lab manager, Robert Stroud, says that the purchasing decision was easy. “At the time, we were involved in a project that required us to analyze over 1,000 samples for 10 analytes we were interested in,” he says. The ELISA-based method they were using required at least 100 µl of sample per well and 4-6 hours to analyze one analyte. “The Bio-Plex system allowed us to go from 100 µl of plasma to study one analyte down to 10 µl of plasma to measure more than 22 analytes — in the same amount of time,” says Stroud.

The Bio-Plex system’s ability to process multiple measurements on the same sample enabled the Spinale lab to do something they’d never been able to do before: serially measure changes in inflammatory cascades. “Not just at one point, but at multiple time points in the course of heart disease and in the course following heart surgery,” says Spinale, “and (we can) put a time map on how things change in the operating room, in the intensive care unit, and beyond.” The goal is to use this information to rethink approaches to both young and older patients with heart disease. Questions currently being addressed in the Spinale lab include: How can we most effectively use these new data to change our decision strategy? How can we more effectively decide what treatments we should be using?

Ultimately, the hope is that the Bio-Plex system will serve as a screening tool to help in these decision-making processes. “There’s one thing we know for sure in cardiovascular medicine today,” says Spinale, “and that is there is no single biomarker that is going to be the answer.” Instead, it’s becoming clearer that there are signatures, cassettes of proteins that are very specific markers to the various cardiac disease states. Researchers in the Spinale lab have already used the Bio-Plex system to identify such a protein signature in patients at greater risk for developing heart disease secondary to high blood pressure.

“What we’re doing is measuring markers early in the disease process and hoping that we can pick up a signature that would identify patients who are at greater risk, who we should intervene with more aggressively earlier, and then other patients who we could just leave alone,” says Spinale. “We hope that this multiplex approach will continue to guide us in these efforts.”

Chemokines and Cytokines as Potential Markers for Personalizing Leukemia Treatment