Apolipoproteins as Biomarkers in Heart Disease and Beyond

While the role of apolipoproteins and low-density lipoproteins (LDL) in cardiovascular disease (CVD) has been understood for some time, emerging research is revealing that these proteins may prove to be valuable biomarkers beyond CVD. They are now linked to cancer, autoimmunity, neurodegeneration, and other chronic diseases.

Table 1. An overview of apolipoproteins.

Table 2. The scientific literature on apolipoproteins in disease, from 1972–2017. 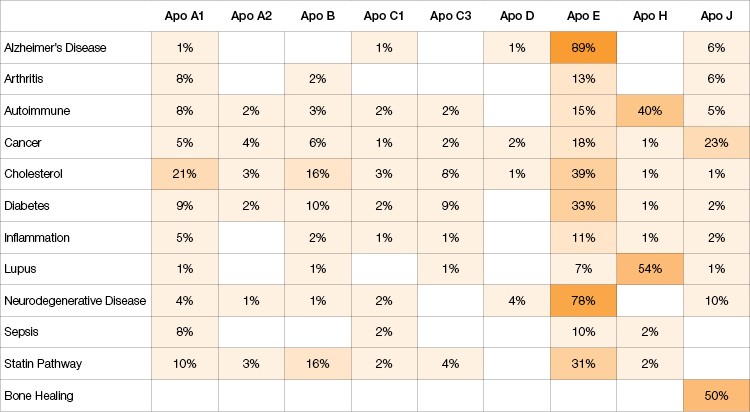 Specific apolipoproteins have been identified as key markers of cardiovascular risk. The apolipoprotein B (Apo B): apolipoprotein A1 (Apo A1) ratio was shown to be superior to HDL and LDL cholesterol ratios for estimating the risk of acute myocardial infarction (McQueen et al. 2008). High serum levels of both Apo B and Apo A1 are also linked to the development of atherosclerosis (Olsen et al. 2017). The correlation between Apo B and cardiovascular disease (CVD) has been demonstrated across all ethnic groups and sexes (McQueen et al. 2008). It is also a greater indicator of atherogenesis in individuals 40 years and younger, compared to older individuals (Sniderman et al. 2016). This therefore serves as a measure for initiating lipid-lowering therapy in these patients (Sniderman et al. 2016).

In contrast, low levels of apolipoprotein C3 (Apo C3) are associated with cardiovascular protection (Maeda et al. 1994, Ooi et al. 2008). A recent study identified an Apo C3 variant called D25V that was highly concentrated within amyloid fibrils. It was shown that D25V causes a unique case of amyloidosis in a number of tissues, including the heart (Valleix et al. 2016). It is likely that fibrate therapy could be used to address this new kind of amyloidosis; but further research is needed to confirm this hypothesis (Valleix et al. 2016).

While cholesterol levels are still used to measure cardiovascular risk, apolipoproteins have emerged as relevant biomarkers for assessing the risk of various CVD and initiating prophylactic and therapeutic strategies.

The apolipoprotein gene E (APOE) has been identified as the most significant genetic risk factor for late-onset Alzheimer’s disease (LOAD) (Corder et al. 1993, Strittmatter et al. 1993). There are different alleles of the APOE gene; however three are more prevalent in the general population: APOE ε2, APOE ε3, and APOE ε4. While APOE ε3 demonstrates neutral effects on the development of LOAD, APOE ε4 has been shown to increase the risk of disease and APOE ε2 has protective effects (Huynh et al. 2017). The APOE ε4 variant is found in approximately 25–30% of the population and in around 40% of individuals with LOAD (van Duijn et al. 1994). As a result, APOE ε4 testing is currently used in clinical research settings to identify patients with an increased risk of developing LOAD (Huynh et al. 2017).

Although APOE is the strongest known risk factor for LOAD, the mechanisms by which it leads to the disease are still poorly defined. A recent study demonstrated that APOE ε2, APOE ε3, and APOE ε4 have different abilities to transfer lipids from neurons to glia, and thus differ in their capacity to mitigate the accumulation of lipid droplets, which could lead to LOAD (Liu et al. 2017). APOE ε2 and APOE ε3 can effectively transfer lipids into glia, whereas APOE ε4 is impaired in its ability to carry out this task (Liu et al. 2017). Further research is therefore needed to fully understand the role of APOE in LOAD in order to determine its potential as a therapeutic target. However, it is likely that introducing APOE ε2 phenotypes in at-risk individuals could be a useful strategy to treat LOAD (Keeney et al. 2015).

Apolipoprotein J (Apo J, clusterin) has also been implicated in Alzheimer’s disease (AD). In 1992, it was suggested as a potential biomarker for AD. However, subsequent studies between 2010 and 2016 have demonstrated conflicting results as to its role in this disease (Woody and Zhao 2016). Differences in the findings are linked to variation in samples and sample size; therefore a more comprehensive study is needed to determine the potential of Apo J as a biomarker for AD (Woody and Zhao 2016).

The incidence of type II diabetes (T2D) has been increasing globally, which has led to major efforts to identify markers that determine risk. Similar to CVD, the Apo B:Apo A1 ratio is associated with the development of T2D, and has been proposed as a new biomarker for predicting the disease (Mao et al. 2017, Zheng et al. 2017). High concentrations of Apo A1 were found to be predictive of T2D and demonstrated a significant linear association that was superior to other lipid and lipoprotein variables (Jian et al. 2013, Onat et al. 2010).

Apo C3 has also recently been identified as a novel biomarker involved in the pathogenesis of diabetes (Aroner et al. 2017). It was shown that Apo C3 on its own is a strong risk marker. Serum levels of Apo C3 as well as the Apo C3:Apo A1 ratio were associated with the incidence of T2D (Brahimaj et al. 2016). These findings suggest that Apo C3 could be a useful therapeutic target for diabetes (Aroner et al. 2017).

The APOE ε2 allele has been shown to confer only a moderate risk to the development of T2D (Anthopoulos et al. 2010). However, further research is needed to determine the metabolic mechanism of this association.

Lipid metabolism has been implicated as a major metabolic pathway in cancer (Baenke et al. 2013). Accordingly, several recent studies have investigated the association between proteins involved in lipid metabolism, such as lipids and apolipoproteins, and cancer risk and progression. While Apo A1 and Apo B are firmly established in CVD, they also play a role in cancer development. It is suggested that Apo A1 and Apo B100 might provide superior risk prediction for certain cancers than standard lipid markers (Chandler et al. 2016).

The Malmo Diet and Cancer study of over 28,098 individuals demonstrated a positive correlation between the Apo B:Apo A1 ratio as well as Apo B and overall cancer incidence (Borgquist et al. 2016). The association between Apo A1 and cancer risk has been further demonstrated in lung, pancreatic, colon, and ovarian cancer as well as metastatic nasopharyngeal carcinoma (Borgquist et al. 2016, Zamanian-Daryoush and DiDonato 2015).

Based on these results, Apo A1 along with transthyretin, transferrin, HDL-associated proteins, β2-microglobulin, prealbumin, and CA125 is currently part of a U.S. Food and Drug Administration approved plasma test to identify patients with early stage ovarian cancer (Zamanian-Daryoush and DiDonato 2015). Similarly, Apo A1 mimetic peptides have also been evaluated in mouse tumor models and shown to reduce tumor growth, inhibit angiogenesis, and abrogate growth factor-induced proliferation, migration, and invasion. These studies suggest that Apo A1 is a key therapeutic molecule for cancer detection and treatment (Zamanian-Daryoush and DiDonato 2015).

Apolipoprotein concentrations are important in systemic inflammatory conditions such as sepsis

A number of studies have identified specific apolipoproteins as biomarkers in inflammation and sepsis. For instance, apolipoprotein M (Apo M) levels were shown to be dramatically reduced in patients with sepsis and systemic inflammatory response syndromes (SIRS) (Kumaraswamy et al. 2012). Apo M contributes to the anti-inflammatory response. Therefore, its reduced expression is considered a biomarker for sepsis and SIRS (Kumaraswamy et al. 2012).

Other studies have investigated the therapeutic potential of Apo A1 to treat sepsis and inflammation. In rat models of sepsis associated with acute respiratory distress syndrome, administration of an Apo A1 mimetic peptide (L-4F) protected animals from progressive inflammation (Sharifov et al. 2013). This suggests that these mimetic peptides could be further developed as effective treatment for systemic inflammatory disease. This is supported by another study showing that overexpression of Apo A1 in mice protects against septic death (Li et al. 2008, Morin et al. 2015). However, further clinical research is necessary to thoroughly evaluate the therapeutic potential of Apo A1.

The global incidence of chronic diseases has been increasing, which has led to major efforts to reduce risk and develop novel therapies. The identification of useful biomarkers is critical for developing better treatment, and apolipoproteins have been shown to be useful biomarkers in a number of diseases. Yet, thorough investigation is needed to fully understand their role in disease and exploit this information for effective prevention and treatment strategies.

To support scientists in their effort to understand apolipoproteins in health and disease, Bio-Rad has developed the Bio-Plex Pro™ Human Apolipoprotein Assay Panel. This panel allows sensitive detection and quantification of ten apolipoprotein analytes including Apo A1, Apo C1, Apo C3, Apo E, and Apo J, which are mentioned in this article.

Jian ZH et al. (2013). The association between the apolipoprotein A1/ high density lipoprotein-cholesterol and diabetes in Taiwan— a cross-sectional study. BMC Endocr Disord 13, 42.

Mao Y et al. (2017). The nonlinear association between apolipoprotein B to apolipoprotein A1 ratio and type 2 diabetes. Medicine (Baltimore) 96, e5834.

Advances in Immunotherapy for Cancer