Advances in Immunotherapy for Cancer

Every year cancer kills eight million people worldwide. By 2030, the number of annually diagnosed cases will exceed 21.7 million resulting in 13 million cancer deaths due to aging and population growth.

Lung, breast, colorectal, and prostate cancer are the four most commonly diagnosed cancers with lung cancer taking the lead (Ventola 2017). Although enormous progress has been made, treatments still include surgery, radiation, and chemotherapy with many patients either not responding well or relapsing. In addition to the treatments, patients must also manage a wide variety of undesirable side effects that impact their quality of life.

While it has been previously established that the immune system can recognize cancer cells, it is also known that cancer cells are very good at evading its normal surveillance functions. Over the past decade, advances in oncology research have resulted in many new treatment options that include immunotherapies. Active therapies that induce an immune response include cytokines, monoclonal antibodies (mAbs), and cancer vaccines. Passive therapies that stimulate a patient’s intrinsic immune response include: bispecific T-cell engagers (BiTE Antibodies), bispecific and multispecific antibodies, oncolytic viruses, cell-based therapies, and tumor-targeting mAbs (Morrissey 2016).

Let’s examine a couple of the newer therapies in more detail.

Cancer vaccines can be either preventative or therapeutic. As the former, they are used to prevent cancer from developing in healthy people, such as the preventative vaccine for cervical cancer that guards against strains of human papillomavirus that are known to cause the disease. As the latter, they are meant to be used as a treatment to strengthen the body’s immune response, for example, the vaccine available for prostate cancer.

Another new process called Lm Technology, designed to activate the immune system by using the body’s natural ability to recognize and attack bacterial infections, is being developed by Advaxis Immunotherapies. This technology alters a live, attenuated strain of Listeria monocytogenes to stimulate cancer-fighting T-cells to attack against cancer antigens and reduce tumor defense mechanisms, in turn enabling the immune system to destroy cancer cells.

With ongoing improvements in understanding the role of the immune system, huge advances have been made in immunotherapy. However, this does not mean that every immunotherapy trial is successful. In July 2016, Juno Therapeutics had to stop a trial of genetically engineered white blood cells, a CAR-T therapy that was being used to treat adult lymphoblastic leukemia patients, when three patients died. The incident was used to regroup and closely assess the safety and potency of combination therapies and served to remind everyone that biology can be tricky. 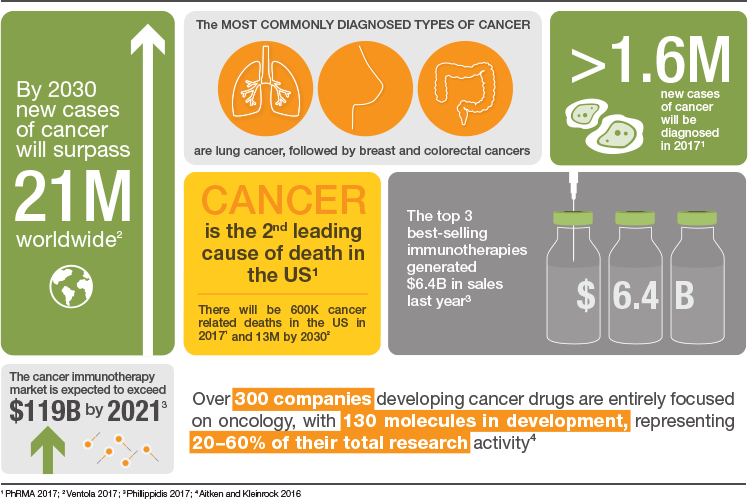 The Robust Pipeline of Immunotherapy Drugs

From 2005 to 2015, the pipeline of oncology drugs in clinical development expanded 63%, with 87% of the new development concentrated on targeted therapies that included protein kinase inhibitors and mAbs as well as other mechanisms that could identify or block cancer cell multiplication. From 2011 to 2015, seventy new oncology treatments were launched and are being used to treat more than 20 tumor types, among them leukemia, lung cancer, multiple myeloma, melanoma, and lymphoma. It is expected that many of these compounds will be approved for additional indications. The newest available immunotherapy drugs use PD-1, PD-L1, and CTLA-4 mechanisms to assist the patient’s immune system to attack cancer cells (Aitken and Kleinrock 2016).

More than 500 companies are actively developing cancer-focused drugs, most commonly for non-small cell lung cancer and breast, prostate, ovarian, and colorectal cancers. The majority of these companies have pipelines entirely focused on oncology indications each with between one to seven compounds in development.

The immunotherapy market is expected to grow to almost $120 billion by 2021 (Phillippidis 2017). A large number of companies are collaborating with one another in order to develop these new therapies. The top three collaborations are listed in Table 1.

Amgen currently has, in various stages of clinical development, the largest number (273) of potential immunotherapies (Figure 1). Merck & Co. (136), AstraZeneca (64), and AdaptImmune Therapeutics (59) follow at a distance. In total, the top 25 companies are developing 909 immunotherapies; 422 are in phase I/II clinical trials, 273 are in phase II/III, and 146 are in stage IV. Most of the immunotherapies in development are focused on proteins/antibodies (57) followed closely with a focus on T-cells (31) (Figure 2). 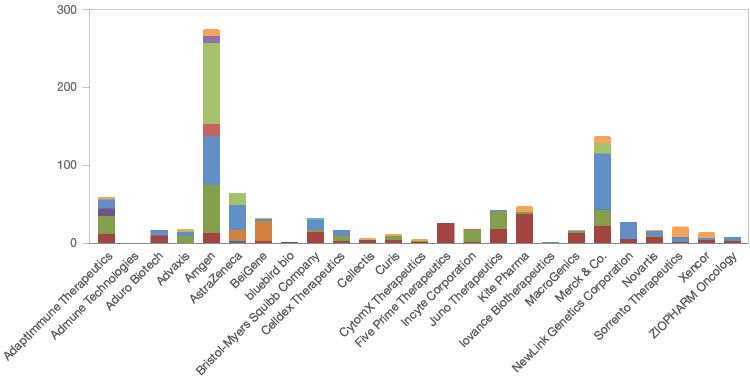 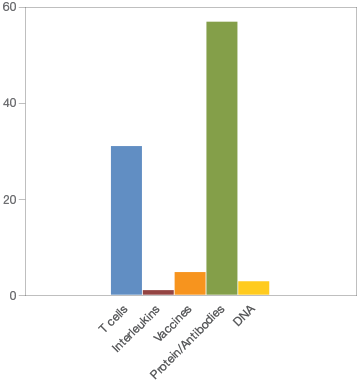 Cancer is one of the most lethal diseases globally. Much progress has been made in developing immunotherapies and their rapid development and promising initial success play a role in current cancer treatments. Different treatment strategies have elicited varying outcomes in anti-tumor effect. Going forward, it will be important to identify patients that will benefit from therapy through the use of predictive biomarkers. Effective combination therapies as well as the timing or duration of immunotherapy administration will also be future challenges to overcome. The future looks bright as research continues into multiple strategies and agents.

Learn about what’s new in immunotherapy and how it is becoming the next frontier for cancer.

Apolipoproteins as Biomarkers in Heart Disease and Beyond

Cell Sorting and Its Significance in Stem Cell Research