After 29 years of research in cancer immunotherapy, Dr. Suzanne Topalian has been acknowledged as one of “Ten People Who Mattered This Year” in the December 2014 issue of Nature for her pioneering research on programmed cell death protein-1 (PD-1) inhibitors.

The road to this prestigious accomplishment began with a two-year fellowship at the NIH National Cancer Institute in Bethesda, MD under cancer immunologist Dr. Steven Rosenberg, who was credited as the first modern researcher to use immunotherapy for cancer treatment. During her 21-year stay at the NCI, she investigated anti-tumor immune responses in cancer cells to establish a foundation for immunotherapies such as cancer vaccines, adoptive T cell transfer, and immune-modulating monoclonal antibodies. Although many of these experiments involved a basic science approach, Rosenberg said Topalian always kept the big picture — finding cancer immunotherapies that are effective in the clinical setting — in mind.

Although cancer immunotherapy was identified as a possible treatment over a century ago, it has faced heavy skepticism among scientists until recently, and many of the early clinical trials for immunotherapy were disappointing. However, Topalian noted that the trials had “exceptional responders” to the treatments, which helped her refine the therapies and “keep hope alive” that immunotherapy could be effective.

In 2006, she moved to the Sidney Kimmel Comprehensive Cancer Center at Johns Hopkins University in Baltimore, MD, where she became a faculty member and the director of its Melanoma Program. Among her most recent accomplishments was the July 2014 approval of nivolumab, the PD-1 inhibitor that she helped pioneer, in Japan to treat patients with advanced melanoma.

Although this approval was a victory for Topalian, she is focused on the next step: obtaining widespread approval for this and similar drugs against a wider range of tumors.

“Although this [approval] was reason to celebrate, we’re still looking toward the horizon,” Topalian said.

The Immune System and Cancer

Although cancer cells are derived from an individual’s normal cells, they have acquired various features that allow them to become malignant. They often feature unusual or inappropriate proteins on their surface that initially cause the individual’s T cells to identify the cancerous cells as foreign and attack them. However, cancer cells also have several mechanisms for evading this immune response (for instance, by suppressing T cell activation), which shifts the balance of power from the immune system back to the cancer cells. By the time a tumor is detectable, the individual’s immune system does not recognize the cancer cells as foreign, which allows the tumor to grow relatively uninhibited. 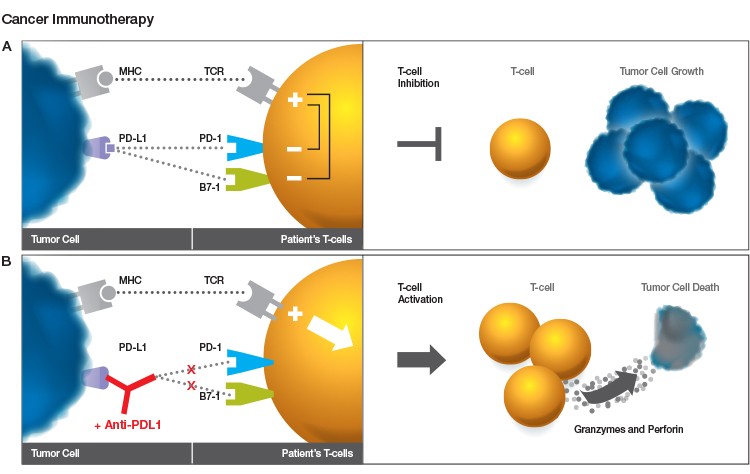 Fig. 1. Role of PD-1 inhibition in cancer immunotherapy. A. The major histocompatibility complex (MHC) on the tumor cell surface stimulates T cell activation by presenting tumor antigens that are recognized by the T cell receptor (TCR). PD-L1 from the tumor cell binds to PD-1 receptors on the T cells and suppresses the T cell response to the tumor, allowing the tumor cells to grow. B. A PD-1 inhibitor antibody such as nivolumab prevents the interaction between PD-1 and PD-L1, stimulating the T cells to attack the tumor and leading to tumor cell death.

Primitive experiments investigating the link between the immune system and cancer were performed as early as 1898, when William Coley showed remission of cancer in patients injected with a mixture of heat-killed infectious agents (Coley 1898). However, the concept of immunotherapy has faced skepticism and clinical studies have shown disappointing results until recently, as researchers such as Topalian and her colleagues began to develop therapies that directly target the signaling mechanisms through which tumor cells evade the immune system.

Even as a resident fellow, Topalian was at the forefront of cancer immunotherapy research. Under the mentorship of Rosenberg, Topalian helped develop a novel method for using tumor-infiltrating lymphocytes (TIL, a type of white blood cell found in tumors) to attack tumors, which involved large-scale TIL expansion, enzymatic digestion, and culturing of the tumor cells. She and her colleagues showed that nine of 24 TIL cultures (developed from human melanomas, sarcomas, and adenocarcinomas) recognized and lysed autologous tumor targets and activated the cytotoxic/suppressor T cells in vitro (Topalian et al. 1987). Subsequent clinical trials in patients with advanced metastatic cancers confirmed that this recognition was specific to the given tumor, indicating that TIL cultures may be an effective way to administer immunotherapy treatment for cancer.

Topalian and her colleagues later showed that melanomas from different patients express shared antigens that are recognized by TIL, indicating that cancer immunotherapies such as vaccines could be developed to treat a wide range of patients with melanoma (Hom et al. 1991). Furthermore, she and her colleagues identified that CD4+ T cells played a central role in the initiation and maintenance of antitumor immunity by recognizing tumor-associated antigens. These studies were followed by investigations using biochemical and molecular methods, such as real-time PCR, to characterize tumor-associated antigens and identify potential therapeutic targets.

The Role of PD-1 Inhibition in Cancer Immunotherapy

When Topalian moved to Johns Hopkins, she used her prolific background in the basic science of immunotherapy to develop agents for the clinical setting. Her primary focus was to develop an agent that inhibits the interaction between PD-1 and its ligand PD-L1 and to identify biomarkers that predict clinical outcomes following treatment.

PD-1 is an attractive target for cancer therapies because its signaling cascade is exploited by many cancers to suppress the host’s immune system. Two distinct inhibitory checkpoints are present (shortly after T cell activation and during the effector phase of the T cell response) that initiate suppression of T cell activation and ensure an appropriate immune response for a given stimulus. The second checkpoint involves signaling through the PD-1 receptor present on the surface of the T cells. Binding of PD-L1 to the PD-1 receptor causes the T cell to die or become inactive.

PD-L1 expression is high on the surfaces of many tumor cells, including those in melanoma, non–small-cell lung cancer, and multiple myelomas. When the host’s T cells are recruited to the tumor microenvironment, the PD-L1 on the tumor cells bind to the PD-1 receptors on the T cell, inactivating the T cells and ultimately creating an immunosuppressed state. Secretion of pro-inflammatory cytokines in the tumor microenvironment may also upregulate PD-1 expression in tumor-infiltrating T cells to encourage their binding to the PD-L1 on the tumor cells, as the tumor-infiltrating T cells express significantly higher levels of PD-1 than T cells that infiltrate normal tissue (Ahmadzadeh et al. 2009). Recently developed immunotherapeutic agents, such as the nivolumab pioneered by Topalian, aim to enhance the T cell response by inhibiting the binding of PD-L1 to PD-1, stimulating the host’s immune system to attack the tumor.

In 2008, Topalian and her colleagues initiated a phase 1 clinical trial to test the safety and efficacy of nivolumab, a monoclonal antibody produced by Bristol-Myers Squibb, in patients with advanced treatment-resistant solid cancers (including melanoma, non–small-cell lung cancer, castration-resistant prostate cancer, renal-cell cancer, and colorectal cancer). The proportion of patients who achieved a partial or complete response ranged from 18% in patients with non–small-cell lung cancer to 28% in those with melanoma (Topalian et al. 2012). Preliminary follow-up analysis indicated that of the patients who responded to the drug, response was maintained for at least 16 weeks after discontinuing treatment in about 71% of the subjects, indicating a “durable response” (Topalian et al. 2014).

Topalian and her colleagues note that further long-term analyses and randomized clinical trials are needed to clarify the overall survival of patients taking nivolumab and the characteristics of patients who respond to the drug. Nevertheless, the success of nivolumab has been a key milestone on the road to successful targeted immunotherapy for advanced treatment-resistant cancer and has encouraged others to pursue research on similar therapies to address a wide range of cancers.

Furthermore, the approval of pembrolizumab, another PD-1 inhibitor, by the U.S. Food and Drug Administration in 2014 indicates this type of drug could become a major component of cancer treatment.

“[Research on PD-1 inhibitors] has legitimized a field that was once scorned,” Jedd Wolchok, an oncologist at the Memorial Sloan Kettering Cancer Center in New York, told Nature.

Indeed, the market growth from $1.1 billion in 2012 to an estimated $10 billion by 2020 (with nivolumab expected to be a sales leader) indicates the confidence experts have in the efficacy of immunotherapy and its central role in the treatment of many types of cancer. Further research will investigate potential ways of combining immune checkpoint inhibitors with other therapies, such as radiation, chemotherapy, and/or cancer vaccines, to create a synergistic treatment effect.

Coley WB. (1898). The treatment of inoperable sarcoma with the mixed toxins of erysipelas and bacillus prodigiosus: immediate and final results in one hundred and forty cases. JAMA 31, 456–465.

Teaching Inquiry in the Classroom