Th17 cells are an important subclass of T-helper lymphocytes that produce IL-17 and other cytokines. Since 2005, the Th17 immune response pathway has been a rapidly expanding field of research, with 83% of literature citations appearing in just the past three years.

Studies in humans and mouse models indicate that Th17 cytokines promote host defense against extracellular microbes such as bacteria and fungi. Recent reports suggest a further role for Th17 cytokines in the protection against protozoa and viruses (O’Quinn et al. 2008 and Hartigan-O’Connor et al. 2011).

The Th17 pathway has also been implicated in the pathogenesis of chronic inflammatory conditions including autoimmune diseases (rheumatoid arthritis, lupus, psoriasis, multiple sclerosis, Crohn’s disease, and type 1 diabetes), allergy, the acceptance or rejection of transplanted organs, and the development and progression of cancer (Wilke et al. 2011).

Using Luminex xMAP technology, we have developed a panel of magnetic bead–based assays consisting of sixteen (15+1) markers that are directly relevant to the Th17 immune response pathway (Table 1). The assays are configured to provide the option of testing as a premixed 15-plex panel or as custom blends of selected assays based on specific end-user needs. Magnetic beads are employed to enable automation of wash steps and to ensure compatibility with all Luminex-based life science research instruments.

The validation studies summarized in this tech note cover all 16 markers in singleplex and multiplex formats. The assays were evaluated in serum, plasma, and cell culture matrices. Testing of patient samples was carried out in collaboration with Pharmasan Labs, Inc.

The Th17 assays were designed on magnetic beads according to a capture sandwich immunoassay format. The capture antibody–coupled beads were first incubated with antigen standards, samples, or controls (60 min) followed by incubation with biotinylated detection antibodies (30 min). After washing away the unbound biotinylated antibodies, the beads were incubated with a reporter streptavidin-phycoerythrin conjugate (SA-PE) for 10 min. Following the removal of excess SA-PE, the beads were passed through the Bio-Plex suspension array reader, which measures the fluorescence of the beads and of the bound SA-PE (Figure 1). All washes were performed using a Bio-Plex Pro wash station. Data acquisition was performed using Bio-Plex Manager™ 6.0 at a low PMT setting. The t-test function in Bio-Plex Data Pro™ software was used to perform statistical analysis on sample data.

Assay working range, also known as reportable range, is defined as an interval between the upper limit of quantification (ULOQ) and the lower limit of quantification (LLOQ) in which both intra-assay precision and standard curve accuracy are demonstrated. The Th17 assays are designed to meet an intra-assay precision of ≤10% and a standard curve recovery of 80–120%. With the exception of IL-4 and IL-22, all targets recorded 4 logs in dynamic range (Table 3). This hallmark feature differentiates the Bio-Plex assays from the 2 to 3 logs dynamic range typically recorded on a conventional ELISA standard curve. 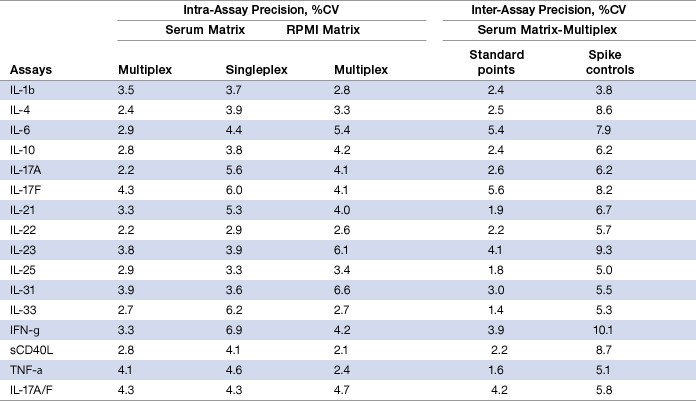 Assay accuracy (recovery) was calculated as the percentage of the observed concentration value of a target antigen relative to the expected value. This parameter was investigated in both serum and RPMI cell culture medium by evaluating the recovery of the standard curve plus a series of spike controls prepared in serum matrix. The recovery data showed that in the majority of the assays at least seven of the eight standard points are robust within the specified 80–120% recovery range. This was supported by similar findings on the seven levels of spike controls (Table 5). 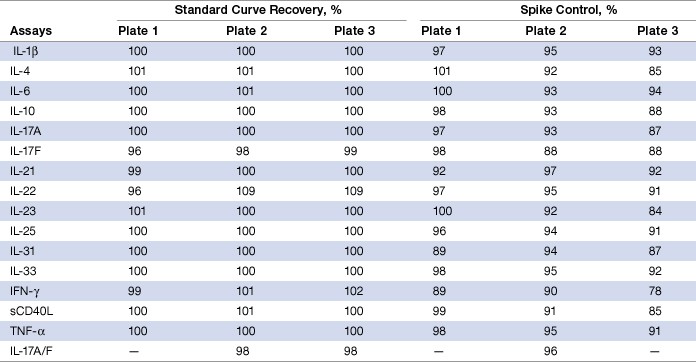 Assay specificity was examined by subjecting specific test reagents to single-detection cross-reactivity studies. This was conducted by testing the individual detection antibody in the presence of multiplexed antigens and capture beads. Table 6 shows that the degree of cross-reactivity reported among the 15 targets was negligible and that these assays can be easily multiplexed.

Dilution linearity was investigated in these assays to ensure that analytes present in concentrations above the ULOQ can be diluted and measured accurately within the assay working range. Linearity of dilution was examined by diluting spiked samples with human serum or plasma in a 1:3 serial dilution. Thus, serum or plasma content remains constant throughout the dilution series. The observed and expected sample concentrations within assay working range were plotted for each analyte. The correlation coefficient (R2) value generated by linear regression analysis reflects the linearity of dilution for that assay. In both serum and plasma matrices, the R² values were 0.971 or higher for all the assays. Similar results were obtained with the singleplex assays (Table 7).

Table 7. Linearity of dilution in serum and plasma matrices. 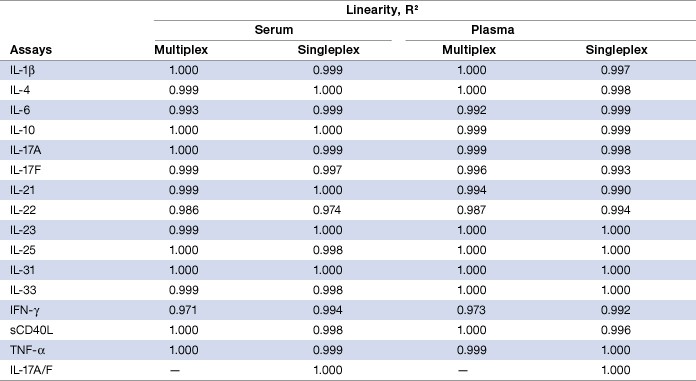 Parallelism analysis was performed in both serum and plasma matrices to ensure that the reference standards and the samples are biologically comparable to each other. This was investigated by comparing the slope values of a spike concentration response curve prepared with either serum or plasma with that of a standard curve prepared in standard diluent. In both sample matrices, all 16 assays demonstrated a parallel dose response between the standard curve and the spiked concentration response curve. Overall, the percentage difference in slope value was < 20% for all the assays (Table 8). 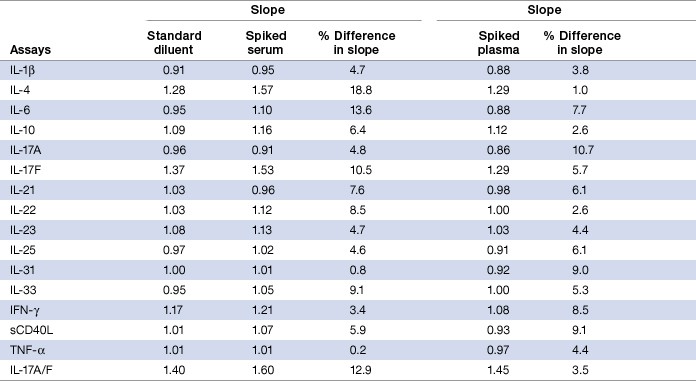 Table 9. Limit of detection (pg/ml) in serum and RPMI matrices. 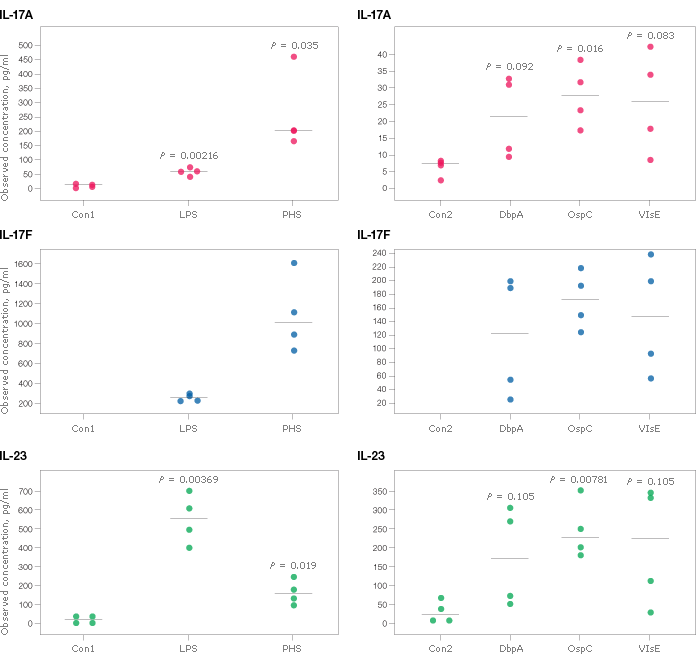 Figure 3 depicts the levels of IL-6, IL-10, IL-33, and sCD40L in sera from patients diagnosed as normal or as having one of several autoimmune conditions. 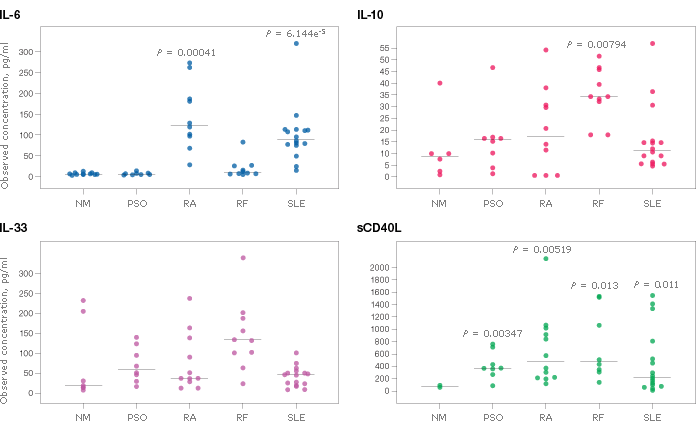 xMAP is a trademark of the Luminex Corporation.

Multiplex Immunoassays in the Race for a COVID-19 Vaccine