In the purification of monoclonal antibodies, the separation of monomers from product-related impurities is a major challenge. Here, we highlight the importance of screening various media to determine the optimal one for an efficient purification process and illustrate that CHT Ceramic Hydroxyapatite is an effective mixed-mode chromatography media.

Monoclonal antibodies (mAbs) remain a predominant class of therapeutic protein products on the market because of their wide range of applications in disease treatment and diagnosis. Over the years, upstream technology advancements have helped improve the titer of target antibodies, from merely 1 g/L two decades ago to 10–13 g/L in fed-batch processes and up to 25 g/L in perfusion cultures today (Gronemeyer et al. 2014). However, these advancements have often adversely affected impurity composition and concentration upon harvest. This has had a significant impact on downstream processing. Elevated levels of antibody aggregates are often associated with the overproduction of mAbs due to the mispairing of disulfide bonds and the unfolding or denaturation of drug molecules at cell growth temperatures (25°C or above) (Rathore et al. 2013).

The strong acidic elution conditions needed for Protein A affinity chromatography, commonly used for the capture of mAbs from clarified tissue culture fluid, can trigger structural changes and promote the oligomerization of pH-sensitive molecules. Additional column chromatography steps are necessary for the clearance of such product-related impurities. The separation of mAb monomers and aggregates has been a major challenge in downstream manufacturing as these molecules exhibit very similar physical and chemical properties and sometimes identical chromatographic behavior. Baseline separation of these mAb species is often difficult to achieve, and extensive process development is required to balance the purity and yield of the monomeric mAbs.

The molecule of interest in this present study, mAb S, was harvested from Chinese hamster ovary (CHO) cell culture. Typically, a Protein A affinity chromatography eluate contains a mixture of mAb S monomers (~75%) and aggregates (dimers and other oligomers, ~25%). We separated the mAb S monomers from the aggregates using three mixed-mode chromatography media, CHT, Capto adhere, and Capto adhere ImpRes, which have all been extensively researched for their applications in mAb aggregate clearance (Gagnon 2009). We compared the purity and recovery of monomeric mAb S purified with these chromatography media. Our results underscore the importance of screening multiple media to develop an efficient downstream production process with the highest possible target purity and recovery.

Chromatographic separations and analyses were performed on an NGC™ 10 Chromatography System (Bio-Rad Laboratories), which provides simultaneous monitoring of absorbance at 280 nm, conductivity, and pH.

mAb S was purified from a CHO cell culture harvest by Protein A affinity chromatography and used immediately. Prior to loading onto the columns, the mAb S solution was adjusted to the desired pH with 1 M Tris HCl and filtered through a 0.22 µm membrane. The total mAb S concentration in the test solution was 2.8 mg/ml with monomer content of 74.12%.

mAb S eluted from the mixed-mode columns was quantified using the Peak Integration feature within the NGC System’s ChromLab™ Software. The peak area of each individual elution fraction was measured in ml * AU. Total mAb S loaded onto the column was determined by injecting 1 ml of purified mAb S into the NGC System, in column bypass mode, and measuring the peak area of the flow-through mAb S.

Fig. 2. Elution of mAb S monomers from a CHT Column. Elution was carried out using 10 mM sodium phosphate and 550 mM sodium chloride, pH 7.0. Fractions A5 to A9 were pooled. OD 280 (—); conductivity (—). The blue vertical bands represent where fractions were collected.

Preliminary design of experiments (DoE) studies were performed to screen for mAb S purification conditions with Capto adhere Media. Binding was maximal with buffers containing ≤50 mM sodium chloride at pH above 8.0. mAb S was only partially eluted from the column under a modest acidic condition (pH 5.0). At pH 4.0, all mAb S species were eluted from the Capto adhere Column without differentiation of monomer and higher molecular weight species. The addition of sodium chloride to the elution buffer further hampered target protein recovery, which indicates a strong hydrophobic interaction between target molecules and this hydrophobic anion exchange media (data not shown). A gradient of pH 8–5 was therefore employed in an effort to elute mAb S monomers selectively from the Capto adhere Column (Figure 3A). Dependency of monomer content and elution pH was observed, with the later fractions containing significantly more high molecular weight species (Figure 3B) and exhibiting a plateau of mAb S monomer recovery (Figure 3C). 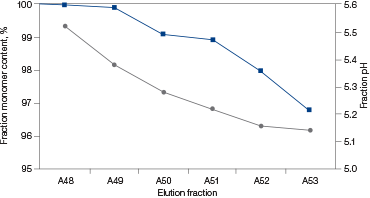 To further assess the effect of the elution pH on final mAb S monomer purity and recovery, step elutions under various pH conditions were performed. The results are summarized in Table 1. The chromatography of mAb S elution at pH 5.5 is shown in Figure 4. The purity of the product was found to be very sensitive to the pH of the elution buffer. A minor pH drop, from 5.5 to 5.4, resulted in a tripling of the aggregate content in the eluate. The pooled product from a pH 5.4 step elution failed the quality control (QC) specification of ≥99.5% monomer content. Furthermore, despite the fact that 14 CVs of eluate were collected, monomer recovery was only ~53%.

Compared with Capto adhere, the binding of mAb S by Capto adhere ImpRes was more sensitive to the concentration of sodium chloride in the buffer. However, the elution of mAb S from this mixed-mode media seemed to be solely dependent on the pH of the buffer, as revealed by DoE screening (data not shown). Again, a pH gradient was used to resolve mAb S monomers from aggregates (Figure 5A). The pH of the elution fractions, monomer content, and monomer recovery were analyzed and the results are shown in Figures 5B and 5C.

Buffers at different pH were used to elute mAb S from the Capto adhere ImpRes Column in step mode (Table 2). Figure 6 depicts the chromatogram resulting from the elution of mAb S with 50 mM sodium acetate (pH 5.4). Overall, Capto adhere ImpRes offered better recovery of mAb S monomer than Capto adhere. The purity of mAb S monomer in the eluate met the QC specification of ≥99.5% monomer content and was consistent at pH 5.4 and higher; however, monomer recovery was only 50–62% after 14 CVs of eluate were collected under these conditions.

Aggregates of therapeutic mAbs often demonstrate different bioactivity/potency profiles, storage stability, immunogenicity, and pharmacodynamic/pharmacokinetic properties than their monomeric counterparts (Vázquez-Rey and Lang 2011). These product-related impurities must be effectively removed during the manufacturing process to ensure the safety and efficacy of the final drug formulation. A high level of aggregates was present in the mAb S harvest, which could have been an indication of the intrinsic hydrophobicity of mAb S or the exposure of its hydrophobic amino acid residues due to misfolding, unfolding, or denaturation. The mixture of monomers and aggregates of mAb S could not be separated by traditional cation exchangers (data not shown). Three mixed-mode media, CHT, Capto adhere, and Capto adhere ImpRes, were tested for their efficiency in clearing mAb S aggregates; their optimal performances are summarized in Table 3.

The contamination level of mAb S aggregates in the recovered mAb S monomer fractions was effectively reduced to below 0.5% by all three media. However, CHT offered the best monomer recovery in the smallest eluate volume (Table 3). Since the isoelectric point (pI) of mAb S was estimated at 6.9 (data not shown), it should bind to Capto adhere–based media through strong electrostatic interaction. The difficult elution of mAb S from these two hydrophobic anion exchangers suggests that a significant hydrophobic interaction was also involved in mAb S binding to these columns. A more stringent acidic condition was necessary for protonating mAb S molecules in order to promote their dissociation from these chromatography media; however, this was carried out at the expense of selectivity between monomers and aggregates. To satisfy the QC specification of ≥99.5% monomer in the final product, elution had to be terminated at pH 5.5 and pH 5.4 for Capto adhere and Capto adhere ImpRes, respectively. As a result, the recovery of mAb S monomer from these chromatography media was compromised. Tailing was observed and elution was incomplete even after 15 CVs of elution buffer were applied.

In the commercial production of therapeutic proteins, both purity and yield are essential to product quality and process efficiency and economics. For the hydrophobic and mildly acidic mAb S molecules, our data show that CHT is the chromatography media of choice for a robust production process with minimal loss of monomeric target molecules.

Capto is a trademark of GE Healthcare.

How Does an Antibody Qualify To Become a PrecisionAb™ Antibody?