Learning in their DNA: Inside the Bio-Rad Science Ambassador Program

What’s an early experience that ignites a passion for science? Three scientists working to inspire the next generation remember what first excited them.

“I used to pan for gold when I was little,” said Damon Tighe, today a genomics researcher and science educator. “It was my first experience with separation techniques. It’s still what I think about when I separate proteins or DNA.”

Horacio Enriquez, now an engineer and materials manager, remembered when, as a high school student in the 1980s, he first saw a computer assisted drawing on a screen. “We didn’t have a computer. We couldn’t afford a computer. So seeing the CAD image touched on that and also made the connection for me with how products, electronics are designed.”

And Stacey Abidayo, now a chemist, thought back to when her parents, both scientists, gave her a microscope when she was little, then caught insects on their lawn to look at with her. “I remember them showing me the wings of a fly, all the different venation,” she recalled. 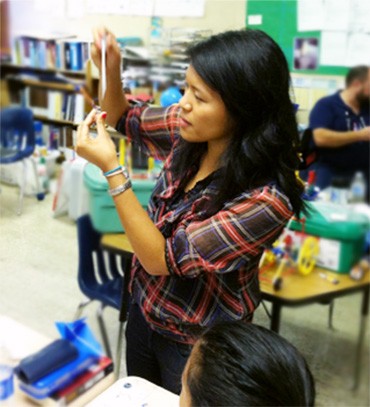 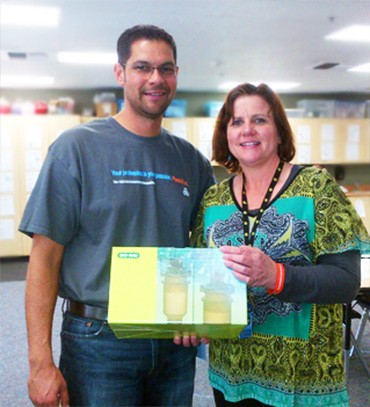 With such formative experiences in mind, Tighe, Enriquez, and Abidayo are all enabling students today to have their own powerful science experience: getting to see their own DNA. These working scientists have been participating as early volunteers in the Bio-Rad Science Ambassador program. Launched in a pilot phase in August 2012 and now fully live throughout the U.S. and Canada, this initiative helps connect active researchers with local teachers, getting the scientist into the classroom with a free Genes in a Bottle kit for an exciting and age-appropriate lab. Using the kit, up to 36 students at a time learn about DNA by extracting and precipitating their own, then keeping it for all time in a specially designed necklace.

Having already served more than 1,000 students across the U.S., the Science Ambassador program appears to be taking off, with new researcher-classroom connections happening every day. It’s a simple formula — any working scientist or classroom teacher can participate, regardless of professional affiliation. The scientist signs up to volunteer through a website that enables area teachers to reach out to her or him. Once a teacher and scientist connect, the researcher goes to the school and performs the DNA extraction experiment with the kids. The Genes in a Bottle kit is suitable for a wide range of students, from grades three to twelve, and the experience it provides — watching one’s own DNA materialize before one’s eyes — produces a near-universal “wow!”

Of course, as Enriquez found, even having a ready-made lesson doesn’t remove the challenges of going into the classroom. “You can prep as much as you want going into it, but it’s all about the dynamics of the classroom, if the kids are going to be receptive to you, or if it’s going to be a total disaster,” Enriquez said, thinking back to his first day as an ambassador at a Sacramento middle school. 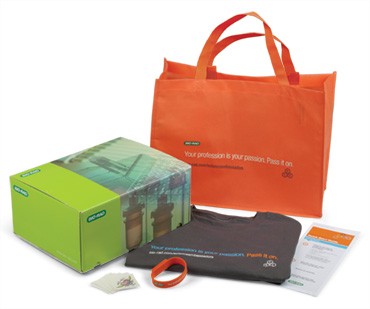 The Bio-Rad Science Ambassador kit contains materials for 36 students to participate, including the complete Genes in a Bottle DNA extraction experiment, a thumb drive with presentation resources, a quick start guide as well as more detailed instructions, and some fun extras including a t-shirt for the event and “I love your DNA” temporary tattoos for students.

“It’s nerve-wracking,” Abidayo admitted regarding her first outing, at an elementary school in Hercules, CA. “In the corporate world, you have a certain demeanor, but children are so honest, so brutal.”

Enriquez and Abidayo overcame their initial fears (Tighe, a former high school science teacher, didn’t have the same level of trepidation), and each has now done several Science Ambassador sessions for different classrooms, guiding students through the process of harvesting cells from their own cheeks, lysing the cells, precipitating the DNA, and then preserving their genetic material in a clear amulet.

“The principal did the extraction with us,” said Abidayo of her first session. “It showed that the excitement people get transcends age. The fifth graders thought it was the coolest thing ever, and here the principal is, ‘look at my own DNA! It’s kind of brown from the coffee I drank…awesome!’” (A student in that group also produced purple DNA material from drinking grape soda before class.)

While most students are aware of DNA and its importance, getting to see their own genetic material makes a new — and slightly shocking — connection for them. “Most of the students are used to seeing DNA as the double helix,” noted Damon Tighe. “Their immediate response is, ‘That’s my DNA? That wad of snot floating in there is my DNA?’ You’re bridging the conceptual world to the real world for them, which doesn’t happen a lot in academia. You never get to see or touch anything, so usually the first response is the visceral, ‘oh, that’s what my DNA looks like.’” 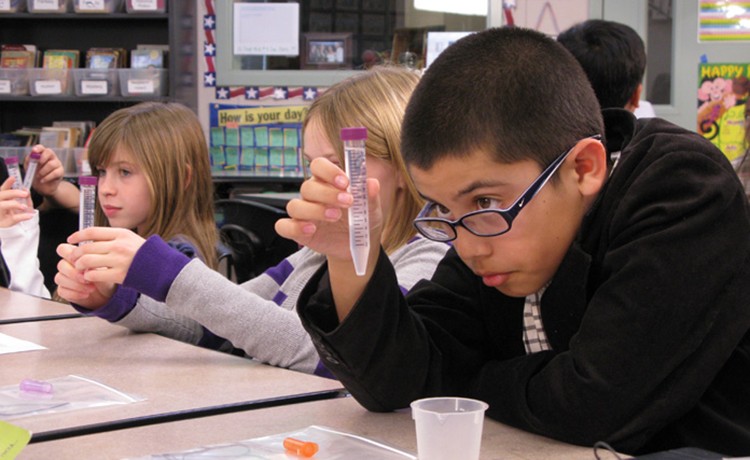 6th grade students at George Kelly Elementary School in Tracy, CA watch as their DNA begins to precipitate, becoming visible in their test tubes as a growing cluster of white strands. Once the reaction is complete, students transfer the DNA material to a keepsake necklace.

Making such a big, personal connection opens the door to further conversations outside the classroom. “A teacher I was working with last week told me that the students would leave her room with those DNA necklaces on, and by lunch, the other teachers are asking, ‘what’s happening in your classroom today?’” Tighe recalled. “Then the student brings the necklace home, and causes a conversation there. It’s really nice that this very simple activity suddenly pulls together an entire community.”

Researcher and educator Damon Tighe leads 6th graders at George Kelly Elementary School in Tracy, CA in the DNA extraction experiment. Science Ambassadors who connect with a teacher in their area through the program website get a free Genes in a Bottle Kit, which contains materials for up to 36 students, to use in their presentation.

By kicking off such conversations, the Science Ambassador program furthers its goal of piquing student interest in science careers. Abidayo discovered that the first step in that process required dealing with misconceptions about scientists. She described students asking her, “‘So are you one of those lab rats who’s stuck at a microscope?’ Or, ‘I was so surprised by how calm you were, because I always pictured you a Dexter’s Laboratory kind of person.’ I told them how my whole lab, we’re not awkward, we’re all pretty loud and outgoing. We’re real people.”

After stereotypes are dispelled, students do start asking more serious questions about the career path, Enriquez found. “There were a lot of questions about myself and my background, did I do this all the time,” he said.

In Tighe’s experience, the career conversations often center on scientific applications. “With high school groups, once they start asking about the DNA, ‘could I get this sequenced?’ ‘Could I PCR off of this?’ they’re immediately seeing an application, because they’re interested in figuring something out about themselves.”

Tighe also noted that the DNA demonstration opens the door to an ongoing working relationship between scientist and teacher. “Outside a teacher calling up someone they already know who works in a lab, these types of interactions between researchers and schools are few and far between. [The Genes in a Bottle kit] is a nice warm-up for the researcher. Does the program ultimately foster a relationship where the scientist returns to talk about their science? For me that’s the long-term hope.”

For an effort just getting starting yet having such a long-term focus, it’s still early to measure what results will spring from the Science Ambassador program. Enriquez emjoyed the chance for personal growth. “In terms of learning about myself, it was good being in front of students, instead of adults all the time,” he reflected. “I remembered patience, that people learn differently. There was a lot of enthusiasm for science and for meeting me. So it was a really great experience overall.”

The program could also have an effect on the way science is taught. “People will talk about teaching STEM [science, technology, engineering, math],” said Tighe. “You can have students work problems for a year, but you’re not getting that application connection. With the DNA extraction, students get to use their hands, and the teachers then see how students respond to hands-on science learning.”

You’re bridging the conceptual world to the real world for them, which doesn’t happen a lot in academia. You never get to see or touch anything, so usually the first response is the visceral, ‘oh, that’s what my DNA looks like.’

For now, though, the effects of the Science Ambassador program are most visible in individual students it reaches. “This one girl who did the DNA extraction, she’s seven,” Abidayo said. “I know her parents, so I still see her from time to time, and to this day she’ll come up to me and say, ‘Do you know what DNA is? I know what DNA is.’”

Scientists in all 50 U.S. states and Canada can now participate in the program. To learn more, visit the Science Ambassador program website at www.bio-rad.com/scienceambassadors.

Digital PCR at the Next Level: Users Find Many Applications for the QX100™ Droplet Digital™ PCR System