Drug research often involves using mouse models for in vivo testing because of the shared genome of mouse and humans. While this similarity is adventageous in many ways, it also poses problems of cross reactivity between the two species. It is an issue especially when assays are intended to work on a specific species. This study tested the cross reactivity of the human Bio-Plex Pro cancer biomarker assays to mouse proteins and found that 26 of the 29 assays showed high specificity to human samples with <5% recognition of the mouse proteins.

Rodents are an important experimental tool in a majority of in vivo human disease research studies. Approximately 99% of mouse genes have an equivalent in humans, making mice ideal for investigating the function of human genes and proteins in diseases such as cancer, cardiovascular diseases, and diabetes. In many cancer malignancies, mice are known to develop tumors in the same tissues and with remarkably similar histopathology to that observed in humans. Hence, implementation of effective mouse xenograft models now represents an obligatory step in preclinical evaluation of drug candidates (Luconi et al. 2012). Such studies frequently require testing in mice using human cancer xenografts to study the xenograft response to drugs (secretion of proinflammatory cytokines and chemokines) and the mechanism of possible graft rejection. In these studies, it is important to know if the assays involved are specific for the donor or the recipient and, when analyzing human xenograft tumors grown in mice, whether the assays being performed are specific only for the human tumors.

Many of the current Bio-Plex Pro multiplex assays are designed for the detection of species-specific protein biomarkers. Such assays include the Bio-Plex Pro human cancer biomarker panels, which have been configured primarily for the testing of human samples. The aim of this study was to evaluate the degree of cross-reactivity of the Bio-Plex Pro human cancer biomarker assays to mouse proteins. The assays were tested for their ability to detect mouse recombinant analytes, as well as native analytes in serum, plasma, and cell lysate. Of the two Bio-Plex Pro Human Cancer Biomarker Panels, 26 of the 29 assays showed high specificity to human samples with <5% recognition of the mouse recombinant antigens.

Mouse recombinant antigens were purchased from commercial vendors and reconstituted as a stock solution using the standard diluent provided with Bio-Plex Pro human cancer biomarker panel 1 (#171-AC500M) and panel 2 (#171-AC600M). The following antigens were not commercially available at the time this study was conducted: panel 1 (sHER-2 and sTIE-2) and panel 2 (IL-8, PAI-1, and TGF-α). The stock solution of reconstituted antigen was sequentially diluted to obtain at least five concentration points for evaluation. The reconstituted antigens were assayed in their respective Bio-Plex Pro panels. All the assays were performed using the Bio-Plex® 200 System according to instructions. Native serum and plasma samples from human and mouse were purchased from commercial vendors. These samples were diluted fourfold prior to analysis.

Fourteen of the 16 Bio-Plex Pro human cancer biomarkers from panel 1 were tested with their matching mouse recombinant antigens as well as native serum and plasma samples. All but three assays showed negligible cross-reactivity to their respective mouse antigens  (Figure 1). Though detected by the human FGF-basic assay, the mouse FGF-basic recovered poorly (<16%) when it was tested between 100 ng/ml and 48 ng/ml. In contrast, the mouse follistatin antigen over-recovered (>300%) with successive dilution, suggesting an impurity or specificity issue. Only the mouse PDGF-AB/BB antigen recovered within 70–130% (Table 1). These three assays also detected native signal in mouse serum and plasma samples.

Of the 18 biomarkers in Bio-Plex Pro human cancer biomarker panel 2, 15 mouse counterparts were tested and also showed insignificant cross-reactivity to the human assays (Figure 1). All 15 mouse antigens recovered poorly (<5%). Twelve of the antigens had <0.1% recovery (Table 1). While not recognizing the mouse recombinant antigens, the human EGF, VEGF-C, and VEGF-D assays did detect native signal in some mouse serum and plasma samples. The specificities of these signals need to be further evaluated. 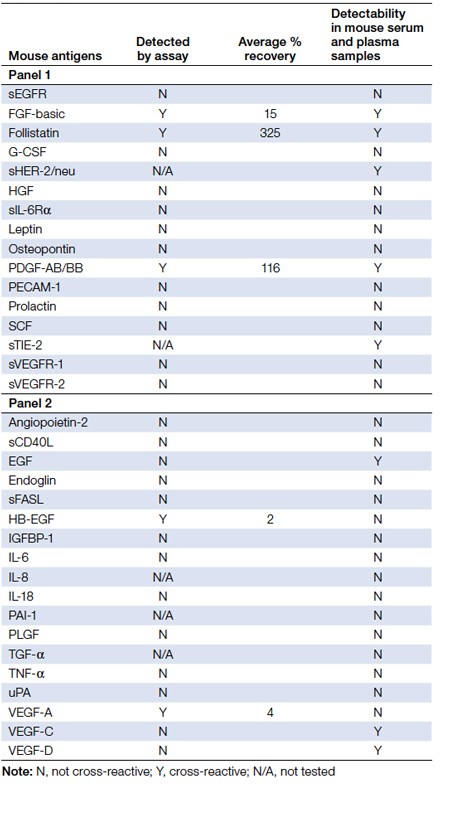 The findings we have presented suggest that the Bio-Plex Pro human cancer biomarker panels are suitable for use in human-mouse xenograft studies, due to their low cross-reactivity to mouse antigens. Twenty-six of the 29 assays from the combined Bio-Plex Pro human cancer biomarker panels are highly specific to human samples with <5% recognition of the mouse recombinant antigens. The human PDGF-AB/BB is the only confirmed assay that would cross-react with its mouse counterpart. The human FGF-basic assay also showed a mild cross-reactivity to its mouse counterpart. The mouse follistatin antigen over-recovered with sequential dilutions, suggesting matrix interference. Additionally, the detection of follistatin signal in native mouse serum and plasma samples may suggest cross-reactivity of this assay to mouse. However this could not be confirmed by our findings using the recombinant follistatin. While not recognizing the mouse recombinant antigens, the human EGF, VEGF-C, and VEGF-D assays did detect native signal in some mouse serum and plasma samples.