The Australian outback brings to mind many things: ancient Aboriginal cultures, remote ranches, dusty roads, wild dingos, exotic rock formations. Advanced microbiology techniques like real-time PCR usually don’t make the list. However, that’s exactly what tropical medicine specialist Dr. Tim Inglis had planned in August 2012 when he and his colleagues strapped extra water bottles into their two SUVs and set out from Broome, Western Australia, on the Gibb River Road. This graded dirt track winds 800 km (500 miles) through the heart of the Kimberley Wilderness, a landscape of wind-carved sandstone, waterfalls spilling into sheer gorges, and domed mountains rising against the horizon. It’s a dramatic, bumpy, dusty ride — and a tough place to be carrying highly sensitive scientific devices.

Consisting of thousands of square miles of wilderness, the Kimberley is also surrounded by — and supplies water for — some of the most rapidly growing areas of Australia, and is an active zone for emerging tropical infectious disease. Currently, mosquito samples from the area go to Perth for testing, a process that takes weeks. Being able to field a mobile molecular biology lab would enable a much faster, more local response to disease outbreaks and support more accurate disease threat surveillance. But first Inglis needed to see if his equipment could even function while traveling the Kimberley’s rough terrain.

Accompanied by his “Lab Without Walls,” Inglis was on the hunt for several pathogens, including the soil-borne bacteria Burkholderia pseudomallei, the cause of melioidosis in humans, as well as insect-borne pathogens such as Ross River virus, Murray Valley encephalitis virus, Barmah Forest virus, and Kunjin virus. Along with investigating pathogen reservoirs, Inglis also wanted to test his ability to keep real-time PCR running consistently in harsh conditions, and publicly demonstrate pathogen testing using advanced molecular biology techniques.

Trying to Create a “Lab in a Box”

In creating detection assays for various tropical diseases over the past decade, Inglis and his colleagues have been assembling a “lab in a box.” The goal has been to deploy this mobile lab both in the Australian Bush and internationally, especially in developing countries with large, underserved rural populations. In the past, however, getting the right equipment for a truly mobile capability has proved challenging. Previous versions of the lab in a box actually required several boxes to transport.

“Travel with a bulky real-time thermal cycler and automated nucleic acid extraction equipment has been costly and caused a series of problems for government officials,” Inglis said. “The uncertainty generated by shipping molecular biology equipment to and from austere health care settings in developing countries prompted a search for a longer term solution.”

At the beginning of 2012, Inglis significantly lightened his load by upgrading to a Bio-Rad MiniOpticon™ real-time PCR system. The system’s 48-well gradient block functions at up to eight different temperatures at a time over a 16°C range, so sample optimization is efficient and precise, even for runs conducted outdoors, under a tent’s flap. 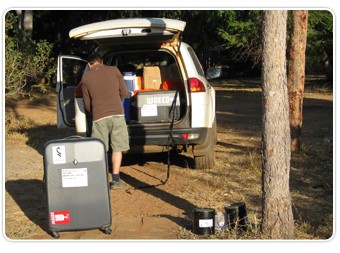 Packing up for the road; lab in a box suitcase in foreground. 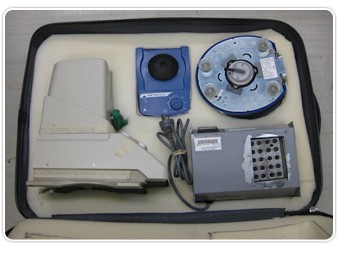 With the MiniOpticon qPCR system, Inglis can now fit his mobile lab’s equipment into a single suitcase.

With his MiniOpticon system weighing in at only 6.8 kg (15 lbs), now Inglis’s lab in a box really does fit into a single suitcase. This has greatly reduced his total equipment weight from 150 kg to 36 kg, including reagents, and has enabled Inglis to better cross borders or, in the case of his trip into the Kimberley, better cross crocodile-infested rivers.

Through the Kimberley with the System

Driving the 800 km of the Gibb River, Inglis and his team took soil samples by day and caught mosquitoes at night. They ran the MiniOpticon system each evening, testing soil isolates using TaqMan real-time PCR assays for the LpxO target of B. pseudomallei, and running isolates from mashed-up mosquitoes to assay a slate of arbovirus targets using a reverse transcriptase real-time PCR assay format. They were rewarded for their nightly work by detecting their Ross River virus target in mosquitoes.

A bumpy road, constant dust, having to pipet outside in the blinding sun or by headlamp after dark — all these posed problems during the expedition. Real-time PCR system breakdowns, however, were not among these issues.

“The only system failure we experienced was due to an unanticipated late night power curfew at Drysdale Station,” Inglis reported. “At that point, the extreme vibration experienced on the road had left one of the vehicle’s number plates hanging by a single screw. The vehicle was coated in fine dust inside and out, but we still had working positive and negative controls. Knowing the gear can survive these conditions is a big step towards equipping remote pathology centers with this kind of equipment.”

Medical scientist Adam Merritt takes a soil sample to test for B. pseudomallei. 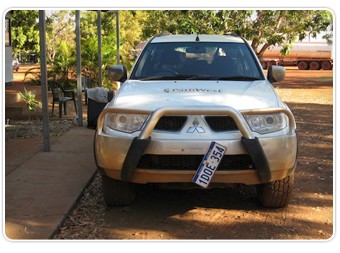 The bumpy road shook the screw off Inglis’s license plate, but his MiniOpticon system performed well throughout the trip.

Along with its reliability, Inglis also praised the MiniOpticon system’s fixed array of 48 blue-green LEDs, each focused to illuminate its dedicated well, for saving him from having to realign lasers between runs. This optical design, along with the thermal cycler’s Peltier-based gradient block, means the entire system design has no moving parts, so is robust for travel. Even a seemingly minor feature, the device’s lockdown catch, was put through its paces on the rough Gibb River Road and proved itself durable enough to meet the challenge.

The Kimberley expedition was one of four remote Australian deployments in 2012 for Tim Inglis’s improved lab in a box, which included the MiniOpticon system. Where just a few years ago, Inglis could run only one assay in the field, on a recent outing he ran 30, including for malaria, scrub typhus, leptospirosis, and dengue fever. He refers to his new, more portable MiniOpticon real-time PCR detection system as a game-changer for the part it played in moving his diagnostic capability forward.

Inglis’s lab in a box, at work on the bench.

“The logistical challenge of putting advanced microbiology methods into action in remote places has taught us some valuable lessons,” Inglis concluded. “We now have a better grasp of the technology improvements needed to use these methods to strengthen clinical laboratory services in regional hospital pathology laboratories. We’re going to continue to work on pathology capability building for places that currently lack the benefits of molecular and other emerging test technology.”

The mobile detection capability Inglis demonstrated using real-time PCR assays has important applications not only in Australia’s outback but also throughout Southeast Asia, where tropical diseases like melioidosis are endemic and medical resources often limited. In under-resourced countries such as Sri Lanka, Malaysia, Thailand, or Vietnam, spotting such pathogens in the field with real-time PCR assays improves prevention and early response, providing a vital line of defense against potentially deadly infections for people who don’t have access to treatment.

Inglis took his improved lab in a box to Malaysia and Sri Lanka in 2012, assaying for more diseases with greater efficiency than before, and training colleagues in those countries in real-time PCR methods. In 2013 he plans to consolidate his 2012 work on Australian arbovirus surveillance, malaria and tuberculosis diagnosis, and severe sepsis management in remote parts of tropical Australia as well as developing countries around the Indian Ocean rim. To this end, the charity Inglis works with, Lab Without Walls Inc., has started to expand its team of volunteers to take on an expanded program of pioneering molecular microbiology work.

Inglis TJJ. The Lab Without Walls: a deployable approach to tropical infectious diseases. Am J of Trop Med Hyg. (in press).

TaqMan is a trademark of Roche Molecular Systems, Inc.